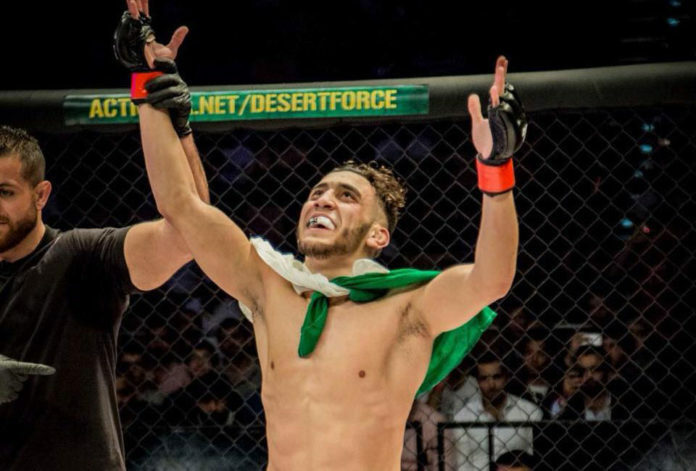 Brave Combat Federation’s first ever champion, Elias Boudegzdame was recently honored in his home country of Algeria by the country’s Ministry of Sports. Mr. El Hadi Ould Ali gave “Smile” an official welcome and declared his victory over Masio Fullen a matter of national achievement for representing Algeria at a global level.

Currently training in France but representing Algeria, the Featherweight champion also received a special gift from national authorities: the Algerian national jersey, embedded with the national emblems of the country. Mr. Ould Ali hopes Boudegzdame will use the jersey in his first title defense and thanked the mixed martial artist for his positive influence in the people of Algeria, while also praising the Kingdom of Bahrain for their efforts in promoting MMA on a global scale and providing opportunity and a platform for athletes from all over the globe.

Elias Boudegzdame will most likely fight former UFC fighter Lucas “Mineiro” Martins in his first title defense. The bout isn’t official yet, but the Brazilian had an intense face-off with the champ, which will most likely translate into a very exciting title fight.

“Smile” is no stranger to former UFC fighters. In his Brave debut, he submitted Walel Watson with a kimura. Two events later, he fought for the promotion’s first ever world title and, once again, used his jiu-jitsu to finish Fullen in the first round, this time with a triangle choke. Boudegzdame’s rise from the beginnings of his career to his world title win has been documented in the documentary “Smile”, available on Brave Combat Federation’s official Youtube channel at www.youtube.com/bravemmaf