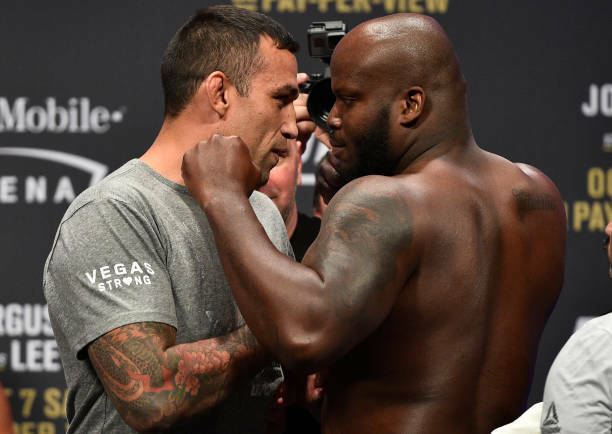 Derrick Lewis vs. Fabricio Werdum has been cancelled off of UFC 216, per UFC play-by-play announcer Jon Anik on Twitter.

It was an injury suffered by “The Black Beast.”

Derrick Lewis out of UFC 216 fight with Fabricio Werdum

Fabricio Werdum v. Derrick Lewis is off due to an injury to one of the fighters. First fight now 4PM PT. #UFC216

Per Ariel Helwani of MMAFighting.com, the issue is Lewis’ back. He “couldn’t move this AM and in lots of pain.”

Confirmed that tonight’s Derrick Lewis vs. Fabricio Werdum fight has been canceled. Lewis’ back continues to give him issues. Couldn’t move this AM and in lots of pain. Tried to fight through it this week. UFC 216 proceeds with 11 fights now.

The heavyweight bout had massive implications, as it could have seen Lewis score the biggest win of his career, or Werdum put himself back in the title picture.

UFC 216 takes place at the T-Mobile Arena in Las Vegas, and is headlined by two title fights; Tony Ferguson vs. Kevin Lee for the interim lightweight title, and Demetrious Johnson will look to make UFC history and snap Anderson Silva’s title defense streak against Ray Borg for the flyweight title.