UFC 216: When there is wrong or right, ‘Mighty Mouse’ will join the fight 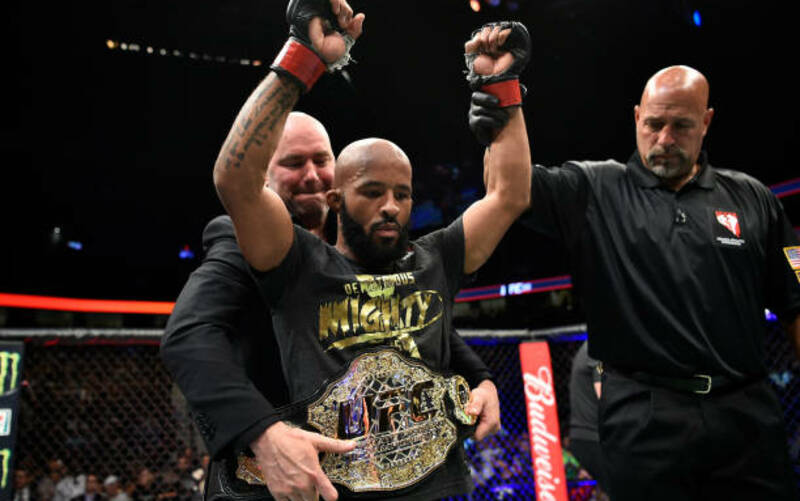 UFC 216 was destined to be historic. When Demetrious Johnson was first scheduled to fight Ray Borg, the MMA gods decided that was not the day worthy to dethrone Anderson Silva’s title defense record. That day was pre-destined to be October 7.

After the tragic shooting in Las Vegas at the Route 91 Strip Music Festival, the UFC donated $1 million to the city and it’s victims. Dana White and company love this city that accepts them many times a year. So they gave back, and what a night it was.

Beneil Dariush and Evan Dunham battle to a tie

It’s not very often two warriors battle to a tie. But, Beneil Dariush and Evan Dunham did just that. With almost equal time of control, Dariush landed more strikes while Dunham had a take down. Ultimately, the judges ruled it a majority draw. Dunham and Dariush both wanted to come out with a victory I’m sure, but they both come out ahead here.

Dunham fought to a draw with a fighter above him, and Dariush avoided another loss that would drop him out of the rankings for the stacked lightweight division. Both fighters have a long way to climb up the ladder of a division topped by kingpin, Conor McGregor. But, this is a pathway that can lead to a very lucrative career in the UFC.

In what was supposed to be slotted for Paige VanZant (my personal favorite) and Jessica Eye, Mara Romero Borella and Kalindra Faria bring the women’s flyweight to the forefront. VanZant had to pull out due to injury (what’s new in the UFC?).

Borella went on to defeat Faria via a rear-naked choke in the third round. This fight signified so much more though. The women’s 125 pound division is long overdue and there are a ton of women ready to compete in it. White and the UFC are putting a lot in this basket because of the embarrassment of riches they will have at this weight. With VanZant and Eye set to throw down, and the UFC dedicating an entire season of TUF 26 to crown a champion, this division will be something to watch out for.

Next opponents will be determined after TUF 26 finishes

Fabricio Werdum did whatever he wanted to Walt Harris

There are obviously levels to the fighting game. And sometimes there are fights that don’t need to happen. The UFC had the best of intentions, not wanting Werdum to waste his camp. So when Derrick Lewis was forced to pull out with a back injury (surprise surprise, another pullout), the heads at the UFC took Harris and put him against Werdum (while taking Harris’ original opponent, Mark Goldbeer off of the card).

The fight was the quickest of Werdum’s career. Almost immediately, Werdum took down Harris, who would certainly be looking for a quick knock out, and put him in an arm bar a minute and five seconds into the bout. Werdum showed how much of a different level the top of the heavyweight division is. With a quick fight, barring any damage to Harris’ arm from the submission, both fighters should have a quick turnaround.

No, seriously. Mighty Mouse dominated this fight. Borg showed signs of promise but it was Demetrious Johnson in the cage with him, so he could do but so much. Promise doesn’t mean anything. What Borg needed was a miracle and he got the opposite of that.

What Mighty Mouse does best is he finds out what you do best, and beats you at that. What’s that? Wilson Reis is a black belt in Brazilian Jiu-Jitsu? Okay, I’ll submit him. John Dodson is an exceptional striker? I’m going to punch him more. Ray Borg and his camp made the mistake of saying Mighty Mouse is “garbage at scrambling,” so Johnson got on the ground and scrambled all night. THEN HE ENDED EVERYTHING WITH A SUPLEX TO AN ARMBAR!!! Seriously.

Johnson is just getting bored with the competition at 125. He passed Anderson Silva for most title defenses, and cleared out the entire division. “Mighty Mouse” secured his spot as one of the greatest and most dominant athletes the UFC has ever seen. Now, he just needs to pad his record.

Tony Ferguson isn’t all there in the head. Kevin Lee shows promise

Both fighters had millions of dollars on the line. Conor McGregor, the money-making magnet champion is likely eyeing one of these two guys to make rich. No pressure, right? Well, ask Robert Whittaker how the UFC treats interim-champs. Nothing is a guarantee.

Nonetheless, Lee had Ferguson on the ropes 9or cage) once or twice. To the disdain of Lee, Ferguson is a little crazy and isn’t all there. The guy kept coming, kept moving and kept working to victory, which he eventually got in the third round with a triangle choke. Lee said post-fight that the weight-cut was tough for him, and that he was considering moving up to 170, which wouldn’t be a bad move for him so early in his career.

Then Ferguson did his best McGregor callout–something everyone is doing these days. But, Ferguson deserves the shot. He’s now at the top of the lightweight division with a 10-fight win streak. But, if Papa Conor scolds Dana White hard enough, he will get to fight whoever he wants, likely Nate Diaz again. Time will tell where these two guys end up in the coming months.

Although, both fighters are talented, both looked slower than what’s required to beat McGregor. Lee looked flat footed and too stationary, and McGregor’s takedown defense is solid enough to avoid Ferguson on the ground. Mendes, who is a much better wrestler, couldn’t even do the trick.