American boxing veteran Shannon ‘The Cannon’ Briggs has been making waves in the boxing community once again, this time trying to entice recently retired heavyweight champion Tyson Fury into a fight.

The outspoken fighter from Brooklyn has taken to twitter to call out Wladimir Klitschko conqueror Tyson Fury in a series of tweets goading the unbeaten UK fighter. Most tweets seem to be centered around what shape Fury is in at the current time having had a BBBOC ban in place meaning he can’t fight in Britain.

Tyson Fury responds on Twitter to Shannon Briggs call out

Fury’s inactivity has led to him gaining a lot of weight which was evident during footage of him supporting his cousin Hughie Fury in his title fight against Joseph Parker. Tyson was also recorded partying with Hughie’s opponent Parker and performing a topless haka after the fight.

After attempting to secure a fight with David Haye in the same manner, Briggs has now taken the social media route to push through a deal taking a swipe at Fury’s silence asking if he is scared.

@Tyson_Fury are you scared 😳 or are you shook 😳? @FightClubOC great page follow for boxing… https://t.co/VNYvEpS6gN

Fury couldn’t resist a quick retort of his own with a dig about Briggs’ age, but at this stage was not being drawn into an agreement to fight.

Scared of a grandad lol,
Go fight som1 your own age.
I don't want to get done for hitting a pensioner .

It seemed that Briggs then knew he had his attention and continued with a barrage of tweets with various derogatory remarks referring to him as #Piesonfury and Tyson fluffy and notorious pie, with plenty of accompanying images.

Just when it seemed to be going nowhere Fury appeared to accept the challenge thrown down by Briggs and even with his insistence not to apply for his BBBOC license back, he could still potentially fight elsewhere.

@TheCannonBriggs I'm gonna give you the best whooping ever,it'll be like a ❤️Making beating. Long & slow with lots of time to play.

Make it Clare I'll not apply to the BBBOC for a new Licance I'll go elsewhere, take my money & bisuness to somewhere that appreciate it.

Nothing has been signed so far but it seems that in principle a fight might just happen, which would be music to the ears of the Briggs team who have really struggled to get decent match-ups. One thing guaranteed is that with these two characters, fireworks would be inevitable and that’s before the fight would take place. 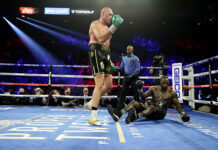