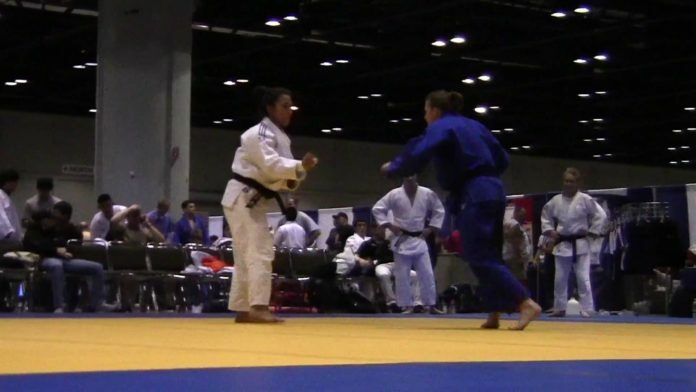 Pauline Macias, a judoka-turned-mixed martial artist, hopes to improve to 3-0 as an amateur on Saturday, Nov. 4, when she meets Jennifer Clausius (6-4, per Tapology), at Valor Fights 46 for a flyweight bout.

Ironically, Macias’ close friend since middle school happens to be a renowned mixed martial artist who transitioned from judo herself. Macias said that same friend is responsible for getting her into MMA. That friend is Ronda Rousey, the former UFC bantamweight queen.

Macias, 29, who said she spent nearly 20 years in judo, began to be burnt out by the sport. Then, her life changed with a phone call from Rousey in early 2014, soon after the then-champion’s second UFC title defense, against Miesha Tate.

Pauline Macias On Next Fight, Career Goals, and How Rousey Got Her Into MMA

“One day, Ronda called me and told me to come visit,” Macias said. “She was like, ‘Look at me, this is the life I have now. It’s a lot better than judo.’ I just went and saw her, hung out with her, stayed the night.”

At the time, Macias was still doing judo and had to decide if she wanted to cross over to MMA. Ultimately, she did so, taking a “leap of faith.”

“I was like, ‘Wow this seems like a transition I can do,'” Macias said. “It’s a chess game. I was just like, ‘Oh, I get to add punches and knees and kicks.’ It was a way to stimulate my mind.”

Macias had the opportunity to soak in MMA experience by being a fixture of Rousey’s fight camps, all the way up to the fight with Amanda Nunes in December 2016.

Now, it’s Macias’ turn to continue her MMA journey. As she does, she said she’ll be forever grateful for the roadmap that Rousey provided on how a judoka can reach the highest level of MMA.

“I don’t think I could ever thank Ronda enough for the knowledge of what I’m going to go through,” she said. “I couldn’t be luckier to have the woman who paved the way in the sport as a childhood friend. That’s luck I’m going to take and use.”

Macias, whose nickname is “Pita,” set the goal of a first-round finish over Clausius. She said a quick win would be “really important” for her after her first two victories over Julie Daniels and Olivia Fisher each came via split decision.

Macias chalks the too-close-for-comfort fights up to her trying to figure MMA out.

“It was definitely difficult at first to get out of some habits, like positioning,” she explained. “Some positions that were good for judo are bad for MMA. Everything has been a process of bringing all of my strengths together. Recently, everything has been flowing together. At first, I was kind of choppy at MMA. Now, it’s starting to flow more.”

Macias said her style is “like a mix of Ronda, Karo Parisyan, and Nick Diaz,” all of whom she looks up to.

Obviously, Macias has a background in judo and sees herself as more of a grappler, but she feels her striking game is starting to come together. She said that since moving to Tennessee, she has added Muay Thai to her boxing-based striking repertoire. With her game becoming increasingly well rounded, Macias believes she stacks up well against Clausius.

“It should be a good match-up for me,” she said. “I think I’m a little bigger than her. I haven’t fought anyone smaller than me before. She called herself a wrestler. [The ground] is my strong area.”

Macias said there’s no timetable of when she’ll make the leap to pro, but it will be when she and her coaches feel she’s ready. That’s okay with her, as she said she’s patient and still has a lot to learn in the sport.

“Even after doing judo for 20 years, I wouldn’t consider myself a master,” she said.

That said, Macias made her goals in her new sport clear: UFC gold.

“I definitely plan on going to the UFC,” she said. “But I don’t want to be an athlete where it’s ‘Oh, she made it to the UFC.’ I want to aim to be champ. I want to make this my career.”