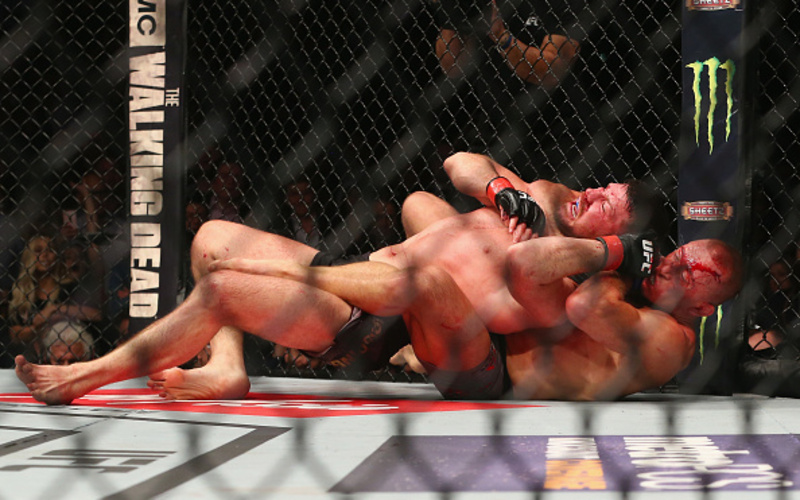 In the hallowed halls of Madison Square Garden in New York, New York, history was made and remade. Three UFC championship fights went down at UFC 217, and three new champions stood tall. Perhaps most shocking of all was George St-Pierre (26-2) knocking Michael Bisping (30-8) to the floor with a thunderous punch, swarming on him with strikes on the ground in order to set up a fight-ending choke in the third round. This makes St. Pierre only the fourth two-division champion in the UFC’s history, and the only one to have held the welterweight and middleweight titles.

It’s been 4 years since UFC gold has been around his waist. #AndNew @GeorgesStPierre pic.twitter.com/si3UXeWyi7

In his first bout in nearly four years, Georges “Rush” St-Pierre’s skills did not appear to have diminished in the slightest. While his cardio was not where it was in the past, it was St-Pierre’s timing and fight IQ that led him to victory. The technical submission victory, gained via rear-naked choke, was St-Pierre’s first submission victory since UFC 79. It was also his first stoppage win since beating BJ Penn until the Hawaiian gave up on his stool at UFC 94.

In his post-fight interview with Joe Rogan, George St-Pierre was coy about which weight class his future laid in. Robert Whittaker is the interim middleweight champion, and would make for an interesting challenge. Welterweight kingping Tyron Woodley has also expressed interest in fighting the French Canadian, and about between the two could be contested in either the 170 lbs. or 185 lbs. divisions.

For Michael “The Count” Bisping, the future is a little more uncertain. He has stated that he will not be retiring, but potential match-ups could prove challenging. Fights with Yoel Romero, Ronaldo “Jacare” Souza, and a rematch with Luke Rockhold are all possibilities for the former champion.

Keep it locked to MMASucka.com for more MMA news and opinion!