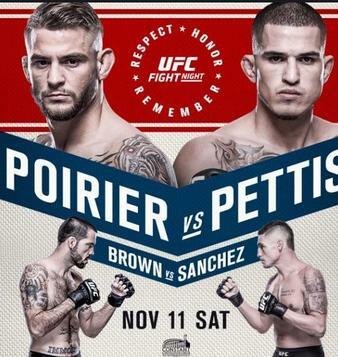 After a history-making event last weekend, the UFC is back again with UFC Fight Night 120. Going down live at the Ted Constant Convocation Center in Norfolk, VA, the card is headlined by Anthony Pettis throwing down with Dustin Poirier in a lightweight clash. Scattered throughout the card, however, are fighters looking to make or remake their names. These are athletes who are needing to stand out from the pack, something that is so much harder to do in the Reebok era. One of the few things a fighter can do to brand themselves as an individual is pick a unique, recurring walkout song. Most fail to do this. So that’s where I come in to help. As MMASucka.com‘s resident musicologist, I can help these wayward competitors find a track that suits their personal brand. I’m even doing it publicly, for you, the fans, to see. So, without further ado, here… We… Go!

What he last walked out to: “Baited” – Flame feat. Fedel

What he should walk out to next: “As Good as I Once Was” – Toby Keith.

I’m just going to say it: “Baited” has one of the most annoying vocal samples I’ve ever heard in a hip-hop song. It’s just… It’s just bad. And it doesn’t seem to fit a long-time veteran former King of Pancrase either. So what does a man who could very well be on his last run walk out to? Well, call me crazy, but I think Toby Keith’s “As Good as I Once Was” would be a perfect choice for the well-traveled veteran. Listen below.

What he last walked out to: “Lunatic Fringe” – Red Rider

What he should walk out to next: “Sabbath Bloody Sabbath” –  Bruce Dickinson and Godspeed

Let’s be clear here, “Lunatic Fringe” is not a bad walkout song. It is, however, something that everybody who wrestled in college has probably walked out to at some point. If he needs a grinding, mid-tempo walkout, then I have something that hasn’t been used so much. While “Sabbath Bloody Sabbath” is a classic Black Sabbath song, there’s a particular cover version  I have in mind. Performed by Iron Maiden singer Bruce Dickinson and Godspeed, I think this version would be perfect for Lopez. You can listen below.

Keep it locked to MMASucka.com for more UFC Fight Night 120 coverage, along with more MMA news and opinion!