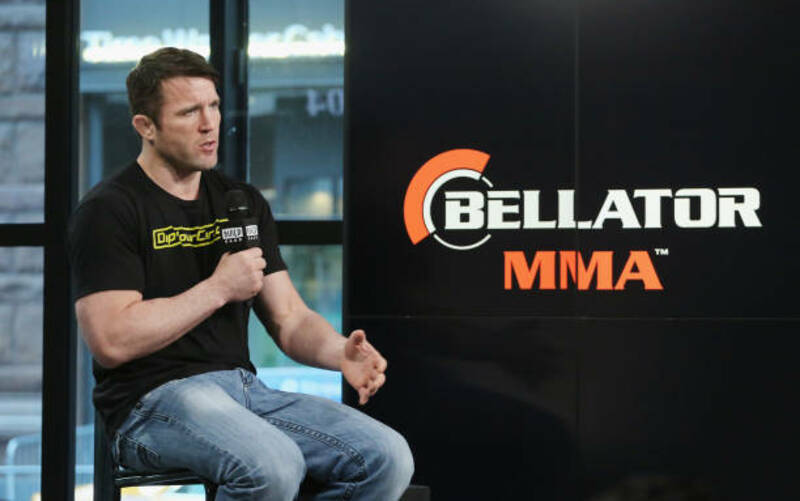 Earlier today Bellator president Scott Coker announced (via MMAJunkie and USA TODAY) that the company would finally crown a heavyweight champion next year. However, Coker did not follow this news with a fight announcement. Instead, he announced that eight of the promotions most notable stars will take part in a heavyweight grand prix.

This won’t be the promoter’s first foray into a heavyweight MMA tournament. One of the landmark moments during his time leading Strikeforce, was another tourney pitting the best heavyweight combatants the San Jose-base organization had to offer. Despite its surprises, and fight cancellations, the tournament was entertaining. And it ended up being the springboard for one of the best fighters of the last decade, Daniel Cormier (who was a first-alternate for the tournament).

Bellator’s version is sure to have its own unexpected turns, however, the question is: Which heavyweight grand prix had more fan intrigue when it was announced? There are a lot of different factors to compare between the two companies, and their respective rosters at the time.

The Companies After the Announcement

While a grand prix for Strikeforce was rumored for some time, it wasn’t until February of 2011 when it was announced. It was a big moment for the company. A press conference with all the participants was called, they took pictures, and we were told that this event was a showcase of the company’s continued rise as a legitimate rival to the UFC. And then just a month later the UFC purchased Strikeforce.

Few knew at the time that Strikeforce was up for sale, and even less foresaw the UFC acquiring it. The sale took some excitement out of the tournament, because the company was no longer an independent force offering high-level MMA, but instead the official number two organization under the Zuffa (the company that formerly owned the UFC) umbrella.

Along with the sale, fighters nearing the end of their Strikeforce deals started to leverage their way into getting into the UFC. One of those men was the Strikeforce heavyweight champion at the time, Alistair Overeem. Despite winning a unanimous decision against Fabricio Werdum in the first round, and being a favorite in the tournament, Overeem found his way out of continuing on, and taking any risk in diminishing his negotiating leverage. And it worked, because his next fight was inside the octagon against one of the biggest draws in the sports’ history, Brock Lesnar.

In hindsight, this opened the door for Cormier to enter the tourney, but no one knew the all-timer he would bloom into back then.

On the flip-side, Bellator is in a very different place as they move closer to a grand prix of their own. Ratings for the company’s events have been solid and showing an upward trend. Plans are for them to be one of the featured sports products going forward as Spike TV changes its name to the Paramount Network. And the promotion is in much better financial standing, as they have the broadcasting behemoth Viacom backing them.

The company isn’t far removed from putting on its second pay-per-view (the first under Coker), and first event inside Madison Square Garden. Overall, Bellator NYC was viewed as a success. This, along with the company’s continued free-agent push (Rory MacDonald, Ryan Bader and Frank Mir), has Bellator in a position to use this tournament to further establish the brand as the recognized opposition to the UFC. Something Strikeforce had hoped to do.

Vets in their Prime

What made the Strikeforce grand prix so interesting was it had several talented fighters right smack-dab in the prime of their careers. Now of course, in the heavyweight division a fighter can still be great passed 36-years-old. But in a sensible MMA world (which it often doesn’t seem to be) let’s assume early 30s are prime years.

Pride FC vets Werdum (34), Sergei Kharitonov (31) and Overeem (30) were all sub-35, and formidable forces in the division—especially “The ‘Reem” who wasn’t far removed from an impressive run in K1. Antonio Silva was 32-years-old, and even Brett Rogers—who did have some name-value at the time—was only 30.

In comparison, Bellator’s tourney is looking a tad geriatric. The youngest man in the tourney is the company’s light heavyweight champion Ryan Bader at 34-years-old. And a case could be made that he shouldn’t even be in the tournament considering his championship obligations. Aside from him, the next youngest man is Muhammed “King Mo” Lawal at 36. Though, he will turn 37-years-old in January. Add to that, two of the eight men are age 41 (Roy Nelson and Fedor Emelianenko) and you have a tourney that lacks the ability to showcase fighters that could lead the company for many years to come. 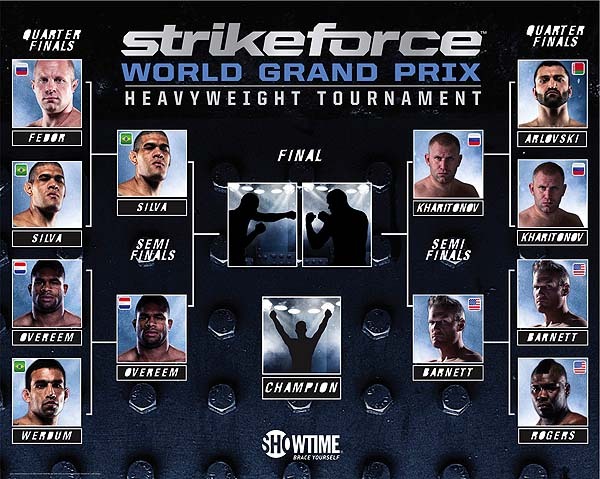 This is where Bellator’s heavyweight grand prix makes up a lot of ground on its Strikeforce predecessor. It’s filled with names fans for the last decade are very familiar with. The brackets include two former UFC champions (Frank Mir and Quinton Jackson), a living legend in Emelianenko (the Strikeforce tourney had him as well), the aforementioned current 205-pound champion, very popular fighters in Nelson and Chael Sonnen (who headlined Bellator NYC) and well-known thumpers in Lawal and Matt Mitrione. The matchups will occur over several Bellator events to start 2018. With these names, it’s safe to assume they will be co-main events, or get top billing on those cards.

The Strikeforce grand prix did have former UFC champs Andrei Arlovski and Josh Barnett. Though, both had question marks next to their names for many fans and pundits. Arlovski was on a three fight losing streak when he faced Kharitonov in the first round (which would turn into his fourth straight loss) and steroids were still very much a talking point whenever Barnett’s name was mentioned in fight conversations.

Werdum was a fighter whose style was heavily based around his Brazilian jiu-jitsu. Neither Silva or Kharitonov were household names, and Rogers was not fully accepted as a top heavyweight by many MMA diehards. The crowning jewel of this tournament was Emelianenko. Which wasn’t a bad thing at all, as he was viewed by many as the best heavyweight in the world at the time. Unfortunately, the bloom was starting to come off the rose of the “Fedor” aura. As he entered the tourney coming off a submission loss to Werdum, ending his 10-year undefeated streak.

What made the Strikeforce grand prix intriguing to fans above all, was a possible matchup between “The Last Emperor” and Overeem. They were without a doubt the best heavyweights not in the UFC at the time. And they could have easily been paired up in a title fight. However, the company chose to go the long-term route and provide a greater amount of interesting content, as opposed to one fight. They would regret that.

In the first round of the tourney Emelianenko would be stopped via strikes by Silva. And as mentioned before, Overeem negotiated his way out of the tournament. When the final four came down to Silva, Cormier, Barnett and Kharitonov, the sizzle of brackets at the start was gone.

Bellator has something unique going on in their tourney. Half of the bracket has fought large portions of their career at light heavyweight. That is the only division Bader has ever fought at, and while Lawal and Jackson have taken fights at heavyweight in recent years, they rose to stardom as 205-pound fighters. Sonnen has fought many times as 205, however his greatest success has come at middleweight.

The Strikeforce grand prix did have former UFC champs in Andrei Arlovski and Josh Barnett.

Bellator could make some intriguing matchups where the size differences are very appealing visually. Much in the vein of Pride FC, where this whole grand prix concept takes its essence from. Imagine Sonnen versus Mir. “Rampage” versus “Big Country.” Or “King Mo” versus Fedor. Despite the lacking of current relevance for some of those names, it is sure to draw attention from long-time fans.

In the end, both events are sure to be highly anticipated for diehards and casual fans curious about good fights outside the UFC. The Strikeforce grand prix on paper looked impressive, and while things didn’t seem to go according to plan, it certainly put names like Silva, Werdum, and Cormier into the minds of viewers who had overlooked them previously. Its success came from what it birthed long-term.

Bellator’s grand prix doesn’t seem like it will offer much for the company five years from now. Though it will bring greater intrigue in the short-term than the Strikeforce grand prix did. Even if favorites are upset as the tourney unfolds, name fighters are still going to be there, and odd and fun matchups will continue from beginning to end.

With both events, fans are sure to be entertained.