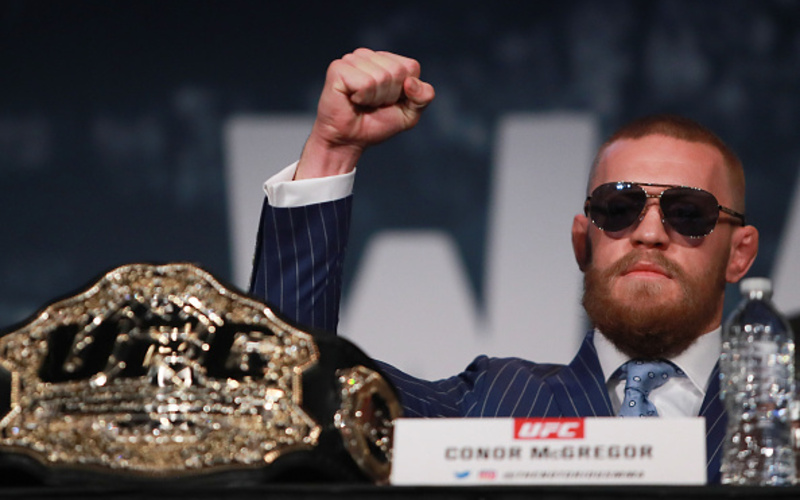 The “notorious” Conor McGregor is it at again. This time the brash Irishman was making headlines at Bellator 187, taking place in 3Arena in Dublin.

McGregor’s SBG Ireland teammate Charlie Ward earned a second-round knockout of John Redmond. Following the victory, McGregor jumped in the cage. He appeared to be about to celebrate with his teammate when an altercation with referee Marc Goddard ensued. It is important to note that McGregor was not a licensed cornerman for the fight.

Goddard attempted to remove McGregor from the cage and there was pushing between the two men. McGregor was then escorted out of the cage by security, only to return back inside for another exchange with Goddard. It was a chaotic scene that also saw McGregor run a lap of the cage, trying to fire up the crowd.

Madness in Dublin thanks to @TheNotoriousMMA!!! DO NOT miss #Bellator187 TONIGHT on @spike 9/8c pic.twitter.com/BGWcOBDvFb

This is not the first time that McGregor and Goddard have had issues. At UFC Fight Night 118 in Poland earlier this month, McGregor was again not licensed as a cornerman but was attempting to help teammate Artem Lobov in a match with Andre Fili. Goddard was the referee for the fight. He had to stop the match and order McGregor away from cage-side at one point.

Dana White and the executives at UFC will certainly not be happy that their biggest star just gave a ton of free publicity to their biggest rival, and made tonight’s Bellator event, must see TV. In addition, the ACB who licensed the fight, may take sanctions here. This could put McGregor’s next fight on shakey ground.