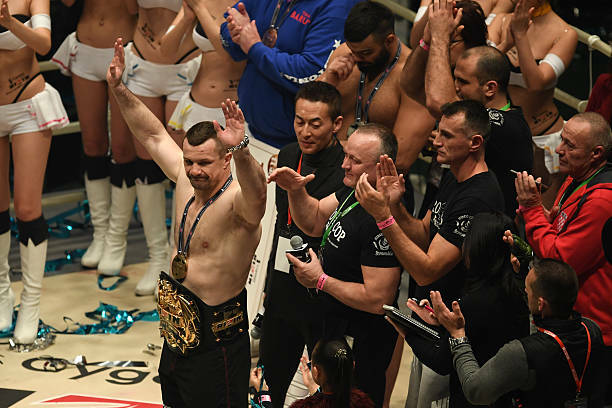 One of the most respected fighters in the history of combat sports, Mirko “Cro Cop” Filipović is back.

The 43-year-old legend fighting out of Croatia will return to the ring on December 31 when he takes on another veteran in the form of 47-year-old “TK”, Tsuyoshi Kosaka.

Filipović (35-11-2, 1NC) retired last December on one of the biggest highs imaginable. After winning four-straight in a two-year span, including a UFC return KO victory over Gabriel Gonzaga, Cro Cop closed out 2016 in RIZIN’s year-end grand-prix. He won three fights in the span of two days, taking out “King Mo” on December 29 before picking up back-to-back first-round knockouts against Baruto and Amir Aliakbari on December 31.

The Croatian legend retired after winning the tournament, but he has decided to postpone retirement one more time.

Speaking of retirements; Tsuyoshi Kosaka (27-19-2) retired from MMA in 2006 after losing to Mark Hunt at Pride Total Elimination Absolute. The Japanese legend returned to MMA a whole nine and a half years later to compete for RIZIN Fighting Federation. In fact, he was the winner of the first fight in RIZIN history.

Despite the near ten year layoff, Kosaka looked solid in his return, stopping James Thompson in the second round. He waited another year afterward to return to action, facing Baruto in December of last year in RIZIN’s grand-prix quarter-finals. Following the decision loss to Baruto, Kosaka returns almost two years to the day in which he returned to MMA after a nearly ten-year absence. Win, lose, or draw; Kosaka will add Filipović to an already incredible resume that features wars with Fedor Emelianenko, Randy Couture, Antônio Rogério Nogueira, Bas Rutten, and Ricco Rodriguez.

The heavyweight clash will take place at RIZIN Fighting World Grand-Prix 2017: Final Round on December 31 at the Saitama Super Arena in Saitama, Japan. It is one of three fights added, the other two being the women’s atomweight grand-prix semi-finals.