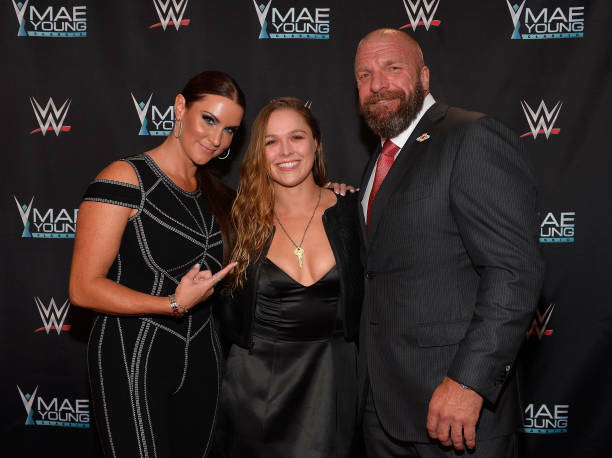 Ever since losing her bantamweight title to Holly Holm at UFC 193, rumors of Ronda Rousey making her way over to the WWE have consistently been in MMA news cycles. This became even more apparent after Rousey’s UFC 207 loss to Amanda Nunes by TKO in the first round.

Many thought that would be Rousey’s last bout in the UFC, and thus the rumors fired-up again. An appearance at WrestleMania 31, and at the Mae Young Classic added the theme of a clear relationship between the fighter and wrestling promotion. Now it appears as though it will actually happen, with sources reporting that a deal is looking very possible. Though, Rousey or the WWE have commented on the speculation. If the deal does in fact happen, how should all parties proceed with a working relationship?

For Rousey, it is a great opportunity to rebuild herself. Rousey at the peak of her powers was a huge star. People adored her. Her fall from grace was, as a fan, difficult to watch. MMA is an unforgiving and many saw her KO loss to Holly Holm as karma. Her aggressive, trash talking style angered many fans, and was viewed as a lack of respect to opponents.

This was always going to be a double-edged sword for her. Considering women had only recently been allowed to fight in the UFC, to see Rousey get in another girls face, and show them total disrespect, was must-watch stuff. Combine this with the fact she is a beautiful, and an Olympian, then it was no surprise Rousey was the face of the UFC.

Getting away from the cage for some time, and showing her talents in the WWE, is a great way to rebuild her star-power. Rousey shined under the lights of the UFC and she could definitely do this in the WWE. If her run in the WWE is successful, she will surely begin to appear in more adverts, and movie roles, and maybe even potentially make a return to the octagon.

Rousey could and should enter the WWE as part of the Authority.

For the WWE, they also have a great opportunity on their hands. The big worry in all of this is the booking of the WWE, especially when it comes to celebrities.

Look at the recent run of Bill Goldberg. What I mean by this is, a deal where she makes an appearance at a PPV, an appearance the following day on RAW, followed by a big match later on a major event to generate more PPV revenue. This should definitely not be how Rousey is booked in the WWE.

At first this seemed like a likely scenario, but after falling from grace with the UFC and its fans, why not give her an actual legitimate run in the WWE.

Look at her strengths. Firstly, she sells fights. The UFC barely had to promote Rousey as she did it all herself by creating great moments in and out of the cage. If Rousey is given the in-ring training she would need, she could be a huge star in the WWE. She definitely has the charisma and talent to win fans over, deliver killer promos, and be exciting in the ring.

If Ronda Rousey’s WWE run is booked poorly it will most likely still make the WWE a lot of money.

Rousey could and should enter the WWE as part of the Authority (the stable once headed by company figure heads Stephanie McMahon and Triple H), and compete in regular matches. Rousey would make an incredible heel. Her early dominance in the UFC could be replicated in the WWE. Just running through competition with little clear motivation, apart from winning the womens’ title and takeover the WWE.

This would work as it already has in the notable success of Brock Lesnar since his return to the promotion. And we have also seen that the WWE can work with the UFC, if Rousey did ever wanted to make a return to the UFC in any form. Giving her cross-promotional appeal if the UFC ever wanted to get back into the Rousey business.

I may be in the minority, but I can see Rousey as a legitimate competitor in the WWE.

If Ronda Rousey’s WWE run is booked poorly it will most likely still make the WWE a lot of money. Similar to Rousey’s flash return in the UFC, the WWE will be much better off by learning from the UFC’s mistakes, and instead of trying to make quick money off of her name, invest in her like the UFC did when she first arrived.

I may be in the minority, but I can see Rousey as a legitimate competitor in the WWE. The aura that surrounds her could be huge for the WWE and women’s wrestling in general. I believe she could be one of the biggest heels in recent memory. She could definitely be a part of exciting angles and matches with others due to her natural personality and skill on the mic.

Rousey could be the big shift that brings women’s wrestling to the top of the card, by creating intense rivalries, and recreating one of the biggest names in sports. This deal could be a huge moment for Ronda Rousey and the WWE.