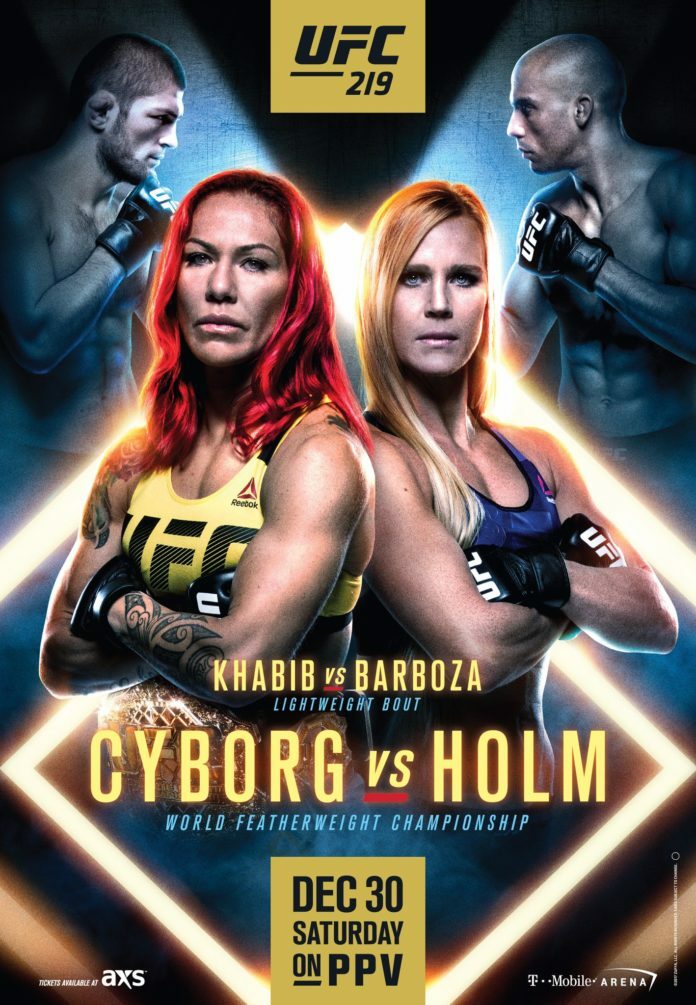 UFC 219 takes place this Saturday in Las Vegas. As per usual, the UFC has stacked what is to be the final card of the year with talent and high stakes match-ups. With fighters looking to get a big win right at the end of the year to kick-start their 2018, this card has serious implications for several divisions. This card features top prospects, tricky veterans, killer match-ups and best of all, the MMA elite going head-to-head. Without further ado, here are five key reasons to tune into the UFC this Saturday, for the last time in 2017.

On fight pass, Tim Elliott meets Mark De La Rosa. Elliott is one of the higher regarded fighters to appear on fight pass prelims this year. His chaotic but calculated style is always exciting to watch. This fight shouldn’t be disregarded due to it being on fight pass.

The prelims took two big hits after Gokhan Saki was forced to pull out of his fight against Khalil Rountree Jr. One of the exciting bouts was moved up to the main card due to the Jimmie Rivera vs John Lineker fight being called off. Because of these changes, the prelims are not as exciting as they looked when announced. Myles Jury vs Rick Glenn stands out as a particularly good fight but not enough to be a key reason to tune in.

The welterweight division has been so exciting this year. It has set itself up to be the best division in the UFC in 2018. Add to that the return of “The Natural Born Killer” Carlos Condit and the division has so many exciting possibilities. Condit returns to the octagon after lots of talk about retiring. Instead, he is back and faces Neil Magny this Saturday. With Condit at 8 in the rankings and Magny at 12, a win for either could put them right into the title picture. Neil Magny has the talent to beat anyone at 170 pounds. Magny is almost a welterweight gatekeeper at this point. Seemingly struggling with the welterweight elite but giving everybody a tough puzzle to solve regardless of opponent.

The big reason to tune in for this fight is to see how will Condit look on his return. Will his talk about retiring have taken an impact on his motivation and dedication to the sport? Can he challenge for the belt once again? How does he solve a problem like Neil Magny? The fight is going to be a close one.

Cynthia Calvillo has had a massive breakthrough year in 2017. She entered the UFC with a record of 3-0. Calvillo then won three straight in the UFC since her debut in March. She now meets the first UFC strawweight champion, Carla Esparza. Calvillo sits at number 6 in the rankings. Esparza is ninth, meaning this is a must win for both fighters.

Esparza holds a submission victory over the current champion, Rose Namajunas. She looks to get back to what was once hers by upsetting Calvillo and stealing her momentum. This would set her up for a title eliminator bout. For Calvillo, it is a huge test ahead in Esparza and an opportunity to show just how good she is. A win here puts her at 4-0 in the UFC in only one year. If she wins with a finish or a dominant decision we could see her challenge for the title at the next opportunity. The UFC is keen to push Calvillo, however, Esparza has been to the mountaintop before. Beating her is no easy task for any fighter at 115 pounds.

The following fight was bumped up to the main card in the absence of the cancelled Jimmie Rivera vs John Lineker fight. This fight features one of the most exciting prospects in the UFC welterweight division today. Marc Diakiese is an English fighter from the Congo. He is incredible to watch. The way he moves and the techniques he uses are so exciting. When given time and space, watching Diakiese is like watching a fighting game character.

Hoping to spoil Diakiese’s fun is Dan Hooker. He is coming off of the biggest win of his career, a knockout win over Ross Pearson. Hooker also has losses to big prospects in Yair Rodriguez and Jason Knight. If Diakiese can get past him, he will solidify himself as one to watch at 170 pounds. Diakiese’s last fight against Drakkar Klose saw him lose his unbeaten record. If nothing else, tune in for the red mohawk, but mostly tune in for the flashy kicks.

The two biggest fights on the card are absolute MMA bliss. The elite of the elite going head-to-head in the octagon. This fight features perhaps the scariest grappler we have ever seen in the UFC taking on one of the all-time greats in striking. Number 2 ranked Khabib Nurmagomedov meets number 4 ranked Edson Barboza. Nurmagomedov is 24-0 in his MMA career. He takes people down, keeps them there and assaults them until they break or time runs out. Khabib will be looking to prove doubters wrong after he has pulled out of fights for various reasons several times. He has been not very active. If Khabib wins this he sits at 25-0 with no one being able to take his relentless punishment.

The man who stands in his way is Edson Barboza. He finishes fights. Barboza has the first wheel kick knockout in UFC history. He is also the only fighter to finish multiple UFC bouts via leg kicks. Barboza is coming off of a scary flying knee knockout over Beneil Dariush. He is also on a three-fight win streak with big wins over Gilbert Melendez and Anthony Pettis. Khabib is a monster on the ground but Barboza strikes like lightning. How fast can Khabib get Edson to the ground is the big question going in. The longer one stands with Barboza the more danger you’re in of him finding your chin with whatever limb he chooses. It’s a traditional striker vs grappler match-up but to the max. Can Khabib stay undefeated and finally get to the gold or will he meet his equal in the form of the lethal Edson Barboza.

Cris Cyborg is undoubtedly the scariest female fighter of all time. She headhunts people like no one else and is a once in a lifetime athlete. Unbelievably fast, strong and technical, Cris “Cyborg” Justino hasn’t lost an MMA fight since 2005. She is the UFC Women’s Featherweight Champion. Cyborg meets the highest caliber of opponent she has ever faced this Saturday. Holly Holm shook the world when she head-kicked Ronda Rousey and dethroned the dominant champion. She now has the chance to do it again as she challenges for the title against Cyborg. Holm is the most technical of any opponent Cyborg has ever faced. Her success in boxing and in MMA make her the toughest challenge Cyborg has ever faced.

Holm is an expert striker and has the ability to dance around opponents with her slick boxing and footwork. She can also turn their lights out with highlight reel head-kicks. This is the best women’s MMA fight to date in terms of talent and scale. Either could be considered the greatest female fighter the world has seen. Now they will meet with a belt on the line as well as their legacies. It is a dream match-up for the fans and will no doubt be a marquee moment in the history of Women’s MMA. Cyborg vs Holm. Just saying it gives me chills. It’s actually happening and it’s this Saturday. What more convincing do you need?