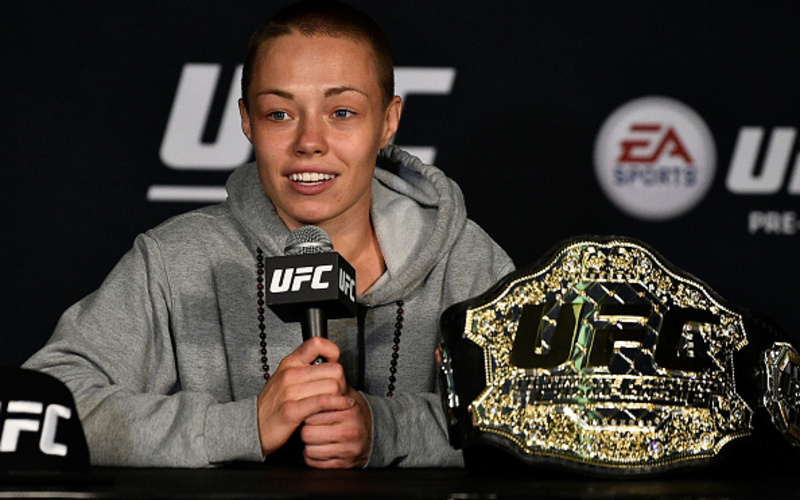 With 2017 in the books, another amazing year of MMA has come to an end. It was a year of great knockouts, great submissions and great fights. MMASucka would like to recognize and award fighters and promotions for making 2017 another memorable year for the sport. As a staff, we voted on who the publication should recognize in each category. These are the MMASucka 2017 MMA Awards.

Fighter of the Year 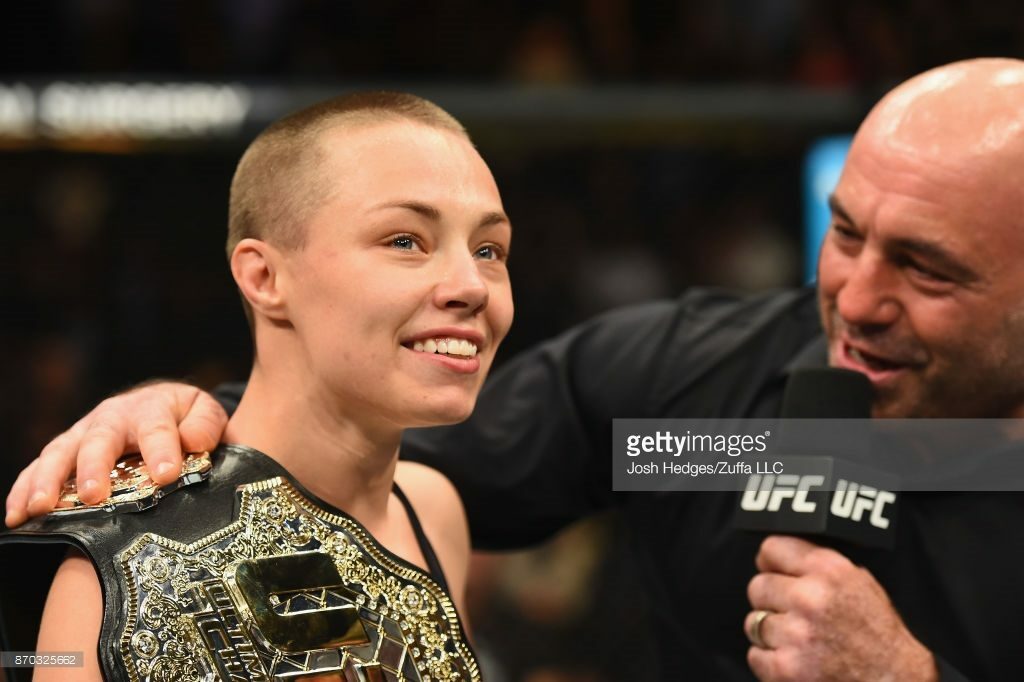 In a year full of contenders for fighter of the year, Namajunas stood out as just a bit more special. She went 2-0, but both wins were of the utmost importance to her career. “Thug Rose” defied the odds and was the one to dethrone former UFC strawweight champion Joanna Jedrzejczyk and end the year with the belt. Before that, she destroyed Michelle Waterson in the second round of their April fight. Namajunas applied a rear-naked choke after downing Waterson with a well-placed head kick. Namajunas not only becoming a UFC champion but in the fashion that she did it makes her MMASucka’s fighter of the year.

Knockout of the Year 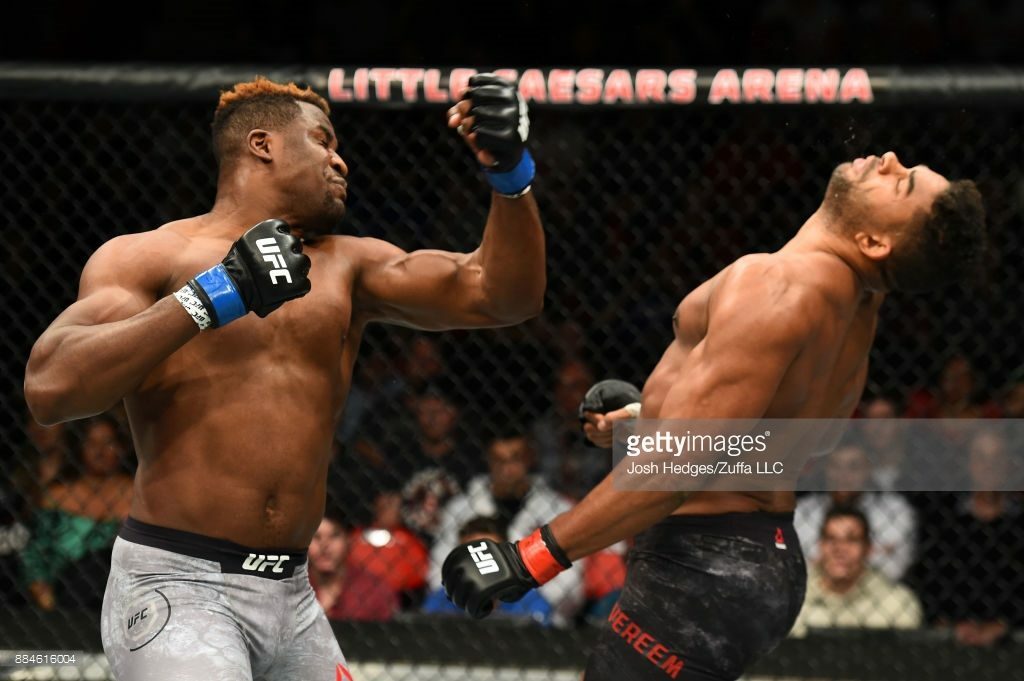 Francis Ngannou’s knocking out Alistair Overeem wasn’t so much a shock as how he did it. At just 1:42 into the UFC 218 co-main event, Ngannou landed what many dub the “Uppercut from Hell” square on Overeem’s chin. Overeem was out before he hit the ground. Some even said they felt unsettled by what they had just watched. The knockout left no doubt that Ngannou would be UFC heavyweight champion Stipe Miocic’s next challenger. They meet at UFC 220 this month.

Submission of the Year 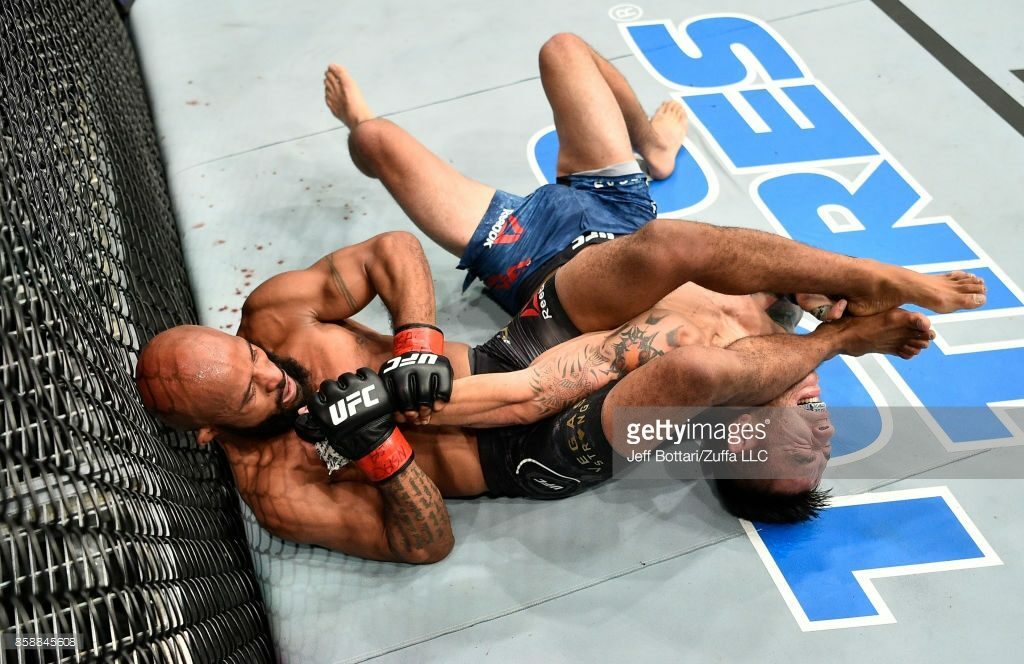 “Mighty Mouse” became the all-time record holder for consecutive UFC title defenses (11) in style when he submitted Ray Borg with a spectacular armbar. The flyweight champ lifted Borg off the ground, then snatched the challenger’s arm in mid-air. He did not let go, and forced a tap from Borg. One of the greatest submissions of all time was reflected by a near-unanimous selection from the Sucka staff.

Fight of the Year 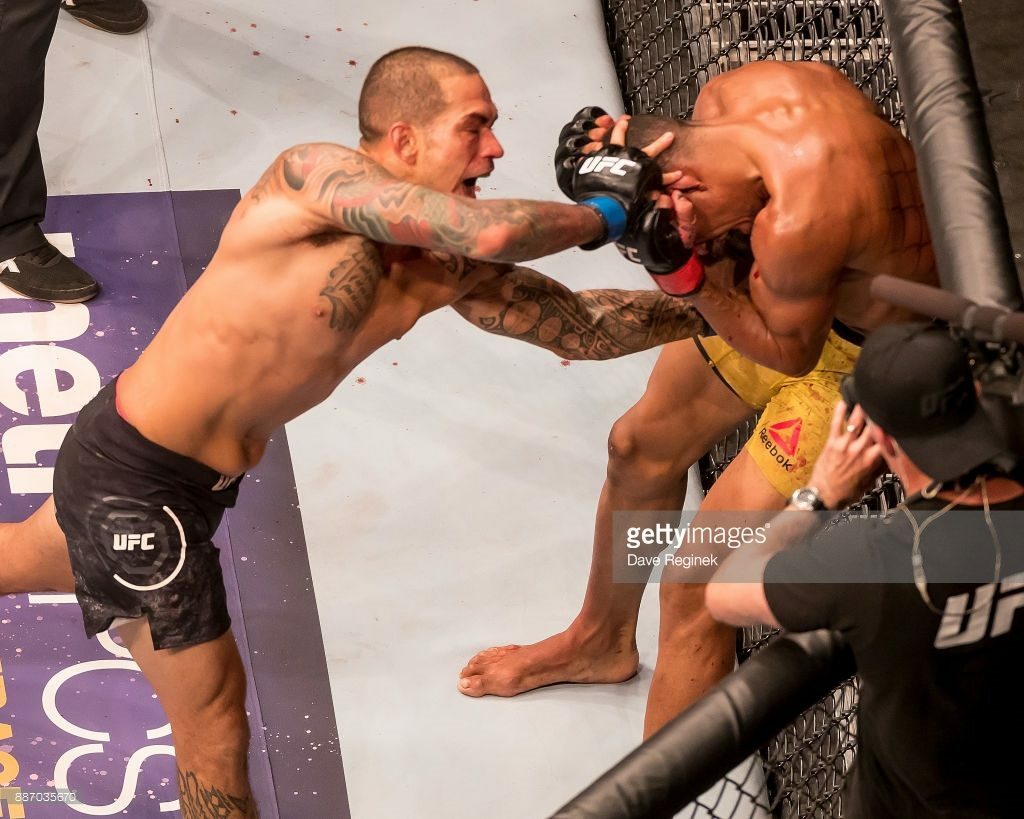 On one of the best cards of the year in UFC 218, Medeiros and Oliveira were arguably the best part. The two went to war for 12 minutes. The fight saw a combined four knockdowns and 168 significant strikes. At the end, it was Medeiros who was left standing in one of the most unforgettable bouts of the year.

Comeback of the Year 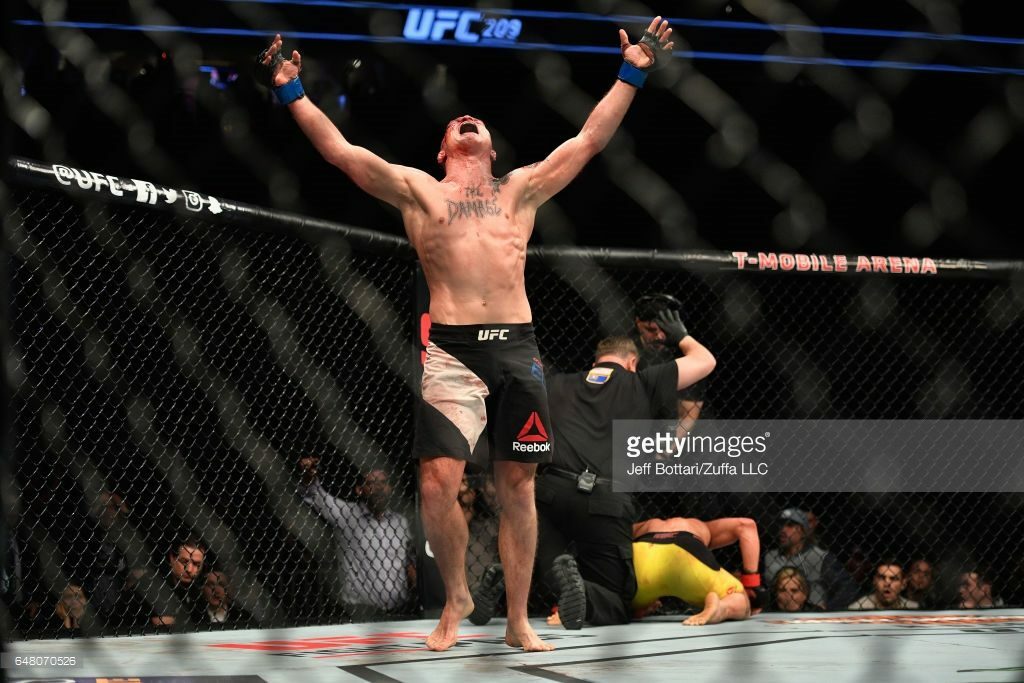 Darren Elkins was well on his way to losing a lopsided decision to Mirsad Bektic in their UFC 209 fight. Bektic had been doubling up on Elkins in significant strikes landed and strikes landed. He had four takedowns to Elkins’ zero. Bektic had nearly nine minutes of control time. That all changed in the blink of an eye. Elkins landed a right hand followed by a right kick that sent Bektic to the floor. Bektic had previously been an undefeated prospect. Elkins’ fantastic comeback victory warranted our website’s award.

Comeback Fighter of the Year 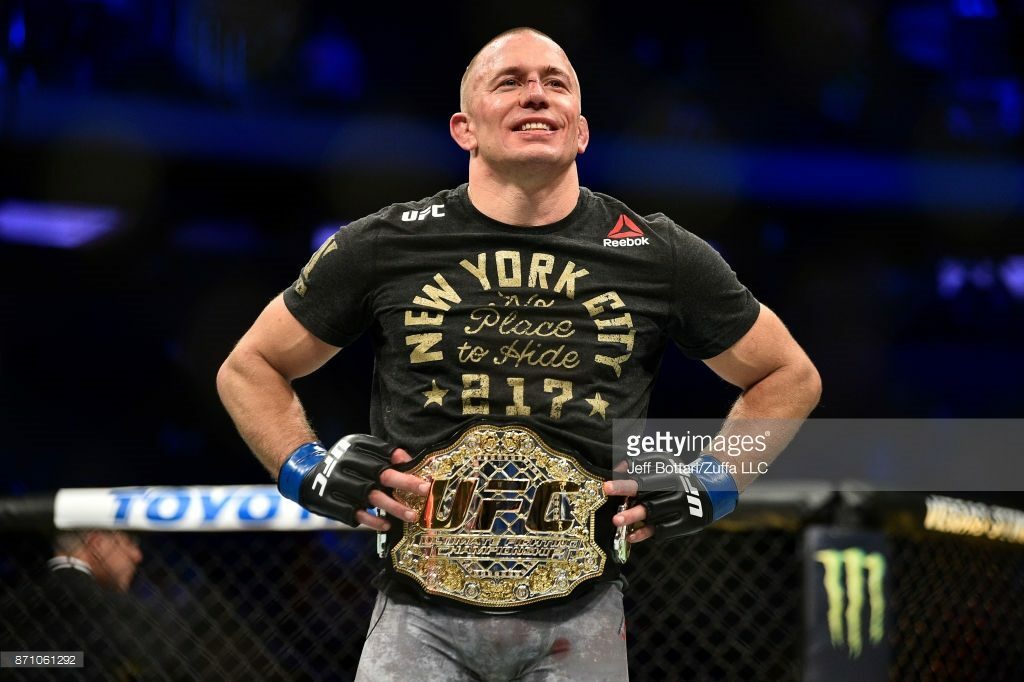 “GSP” returned from a four-year retirement stint and claimed UFC gold. That’s nothing short of fascinating. The former welterweight champion came back, moved up a division, and claimed a submission win over then-UFC middleweight champion Michael Bisping at UFC 217. It was the main event of one of the greatest cards ever. St-Pierre may have vacated the belt a month after winning, but that doesn’t erase his accomplishment of becoming a two-weight champion. It was a near clean sweep on our staff picks.

Upset of the Year 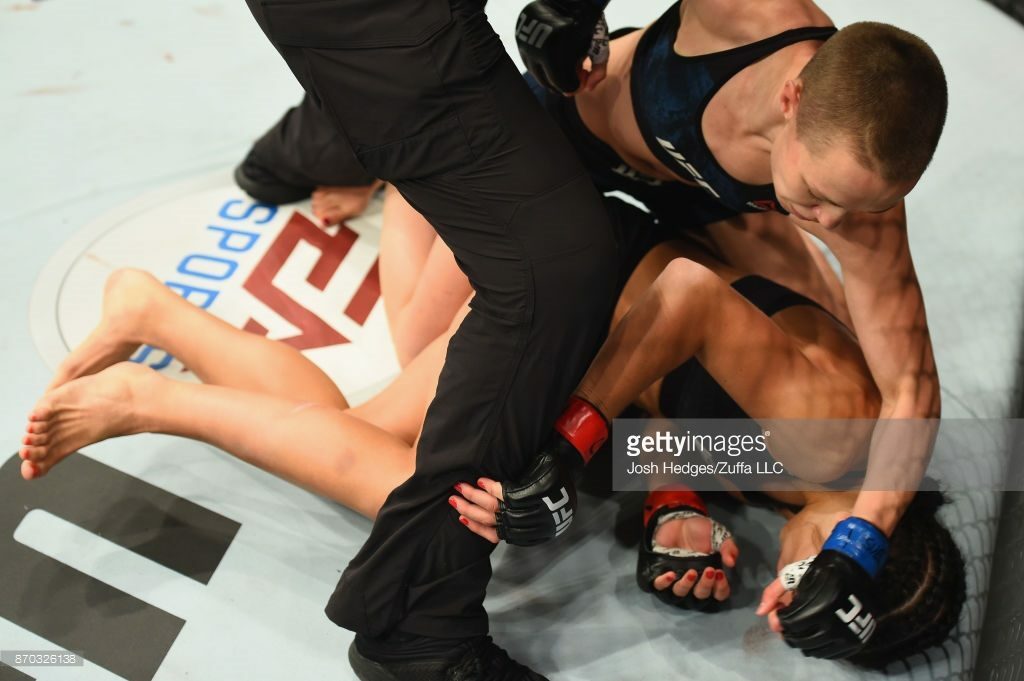 Namajunas’ win over Jedrzejczyk at UFC 217 for the strawweight title was that fight that shocked the MMA world in 2017. Jedrzejczyk was one win away from tying Ronda Rousey’s record for most consecutive title defenses for women in the UFC at six. The Polish star was a -700 favorite to defeat Namajunas. Those who picked Namajunas to win never thought she’d do it by TKO, as Jedrzejczyk is considered one of the best strikers in the sport, man or women. Namajunas knocking Jedrzejczyk down twice and earning her first stoppage via strikes constitutes the upset of the year. 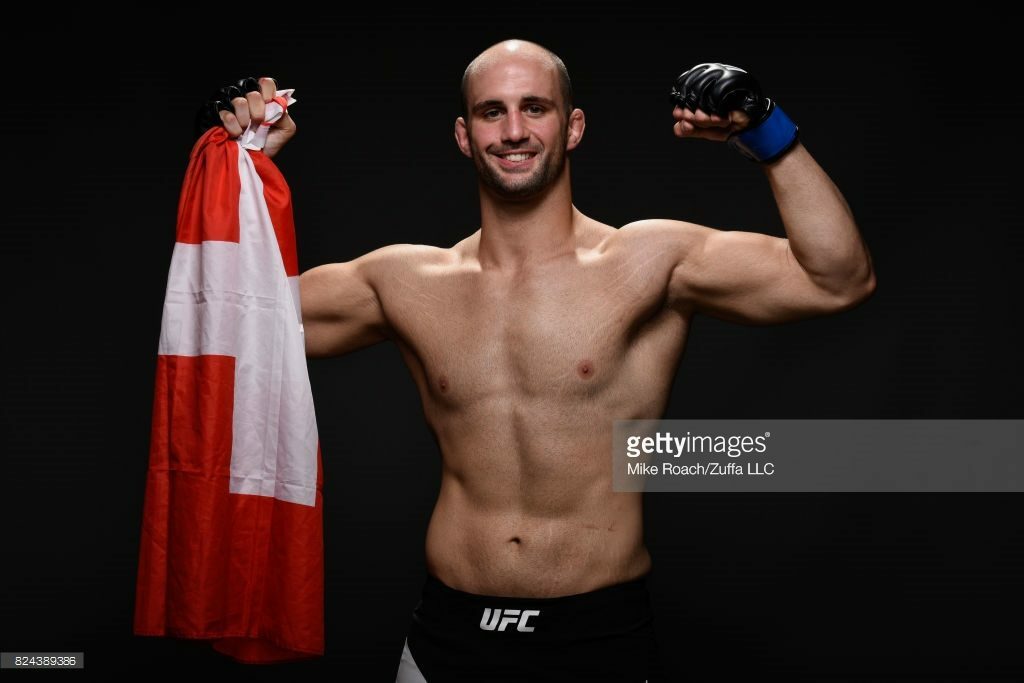 Oezdemir broke onto the UFC scene this year and went 3-0, had two devastating knockouts, and earned a title shot. Not bad for one year. Oezdemir’s first bout was a controversial split decision win over Ovince St. Preux, but fans quickly forgot when “No Time” blasted Misha Cirkunov and Jimi Manuwa back-to-back. Oezdemir was an underdog in every fight. He’ll be one yet again when he battles UFC light heavyweight champion Daniel Cormier at UFC 220 later this month. 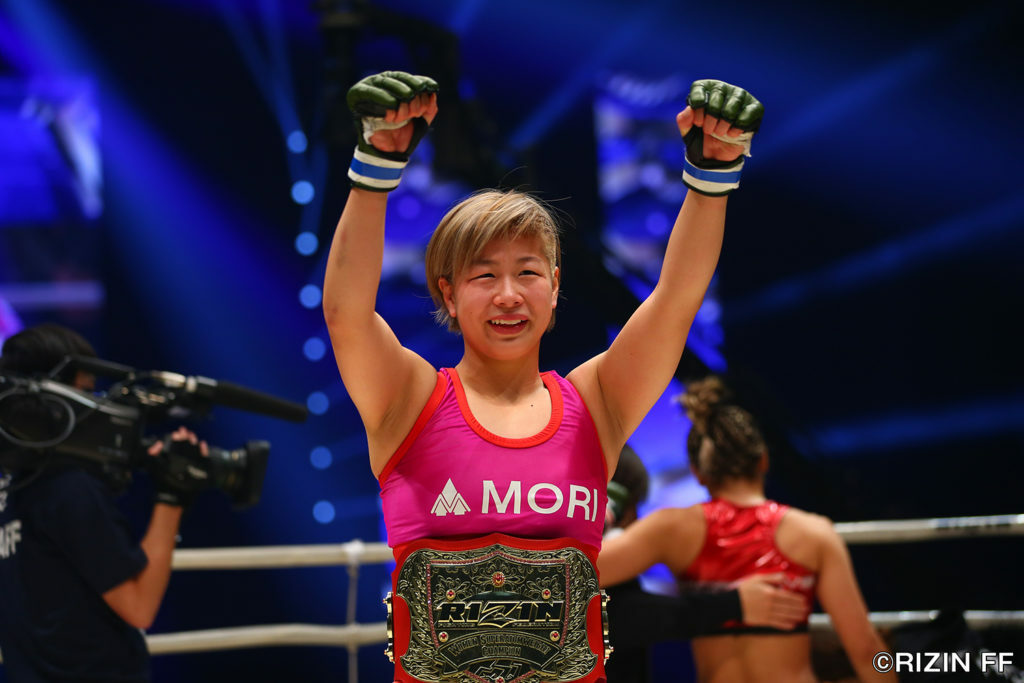 Asakura surprised many when she won the Rizin super atomweight Grand Prix last week. She submitted the likes of Rena Kubota and Maria Oliveira to do so. Asakura not only won a belt at the end of the year, but that topped off a campaign in which she went 6-0. Perhaps the most impressive thing about it is she turned 20 years old in October.

Promotion of the Year 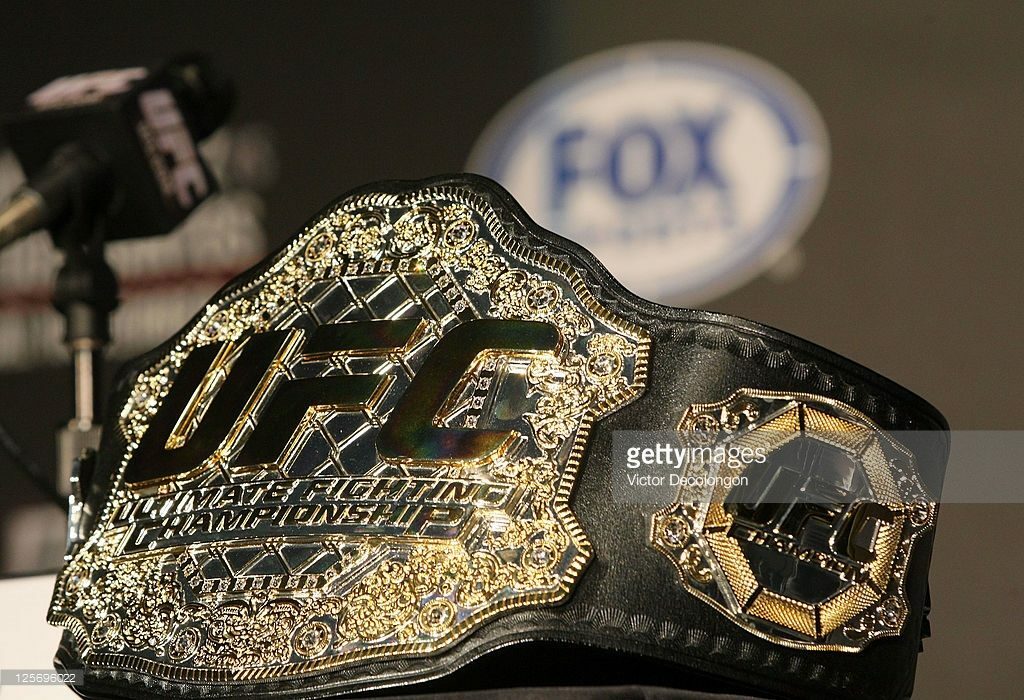 The UFC is widely regarded as the biggest and best MMA promotion in the world. In many’s eyes, that didn’t change in 2017. The brand remains the far most recognizable in the sport. In a year where Conor McGregor and Ronda Rousey did not fight, the promotion managed a strong end to the year. It had Georges St-Pierre return, saw the rise of new champions and stars, and put on some of the most exciting shows down the stretch of the year.

Analyst of the Year 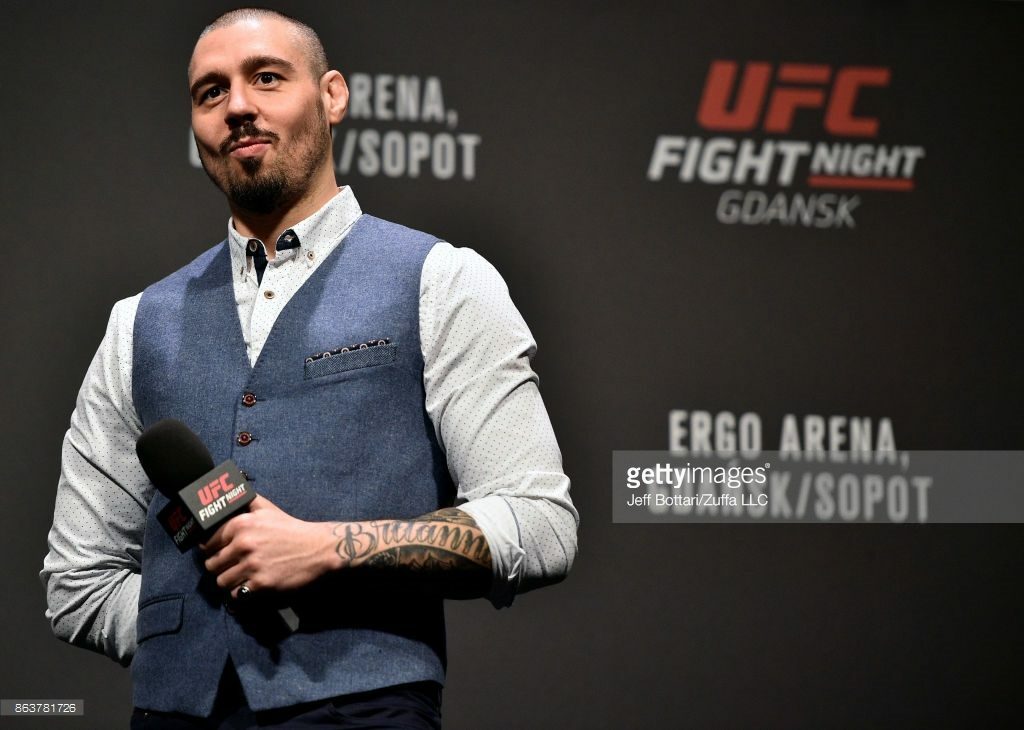 Former UFC welterweight title challenger Dan Hardy continues to be a fan favorite analyst. The MMA community praises him whenever he assumes the color commentary role for FOX at UFC events. In addition to his color, Hardy has also garnered praise for his breakdowns on BT Sport and Inside the Octagon.

Card of the Year 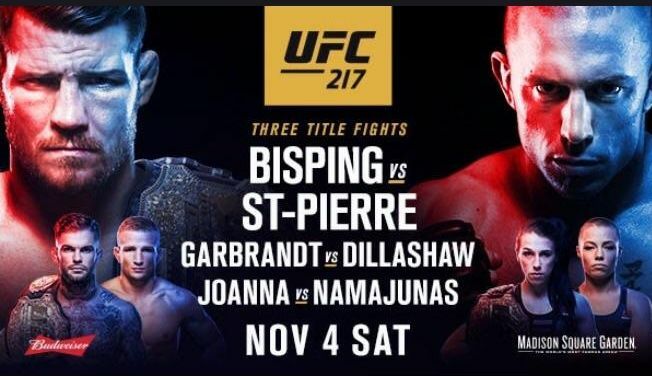 The most memorable event of the year. UFC 217 had three title fights, all of which delivered. Bruce Buffer read “And New!” three times that November night (Georges St-Pierre, TJ Dillashaw and Rose Namajunas). The main card also featured the continuing rise of Paulo “The Eraser” Costa and saw Stephen Thompson get back in the win column against Jorge Masvidal. On the undercard, fans witnessed prospects like Curtis Blaydes, Ricardo Ramos and Randy Brown pick up exciting wins. Of the 11 bouts, eight fighters won by stoppage. Seven were T/KOs.