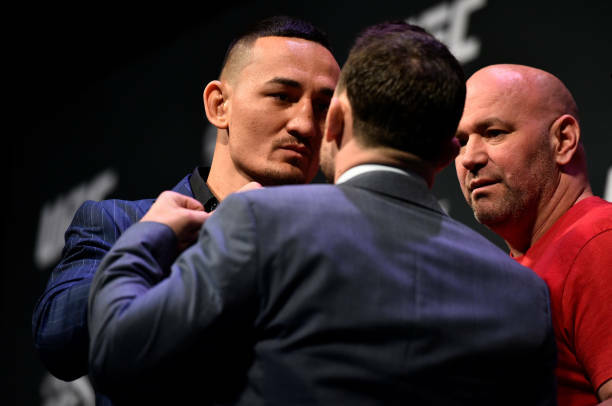 UFC pay-per-views continue to take a massive hit, as ESPN’s Brett Okamoto has reported that UFC Featherweight Champion Max Holloway has pulled-out of UFC 222, where he was slated to defend his title against Frankie Edgar.

The news has come just weeks after Robert Whittaker was forced-out of his title defense against Luke Rockhold at UFC 221, making this recent situation a bit difficult for fans to swallow. The UFC 221 headliner will now feature a interim middleweight championship fight between Rockhold and Yoel Romero.

Ariel Helwani expanded on the report, claiming that Holloway suffered a leg injury in training. No further details have been released regarding the extent of Holloway’s injury.

Holloway and Edgar were originally slated to fight at UFC 218 in Detroit; however Edgar suffered an eye injury which forced him to pull-out. This fight has shades of Tony Ferguson vs. Khabib Nurmagomedov in the likes that both fighters have pulled-out, and it’s getting to the point where you question whether the fight will ever actually happen. If Edgar chooses to stay on the card, he would likely face Brian Ortega, who many believe also deserves a title shot. A loss to Ortega would significantly hurt Edgar’s chances of another title shot in the featherweight division.

Various reports surfaced claiming that the UFC is working to salvage the UFC 222 fight card by adding a bantamweight title fight between bitter rivals TJ Dillashaw and Cody Garbrandt. Garbrandt confirmed on Twitter that he signed a contract, and that the UFC is awaiting Dillashaw’s response.

MMA Sucka will track the latest reports, and continue to update as information is released.