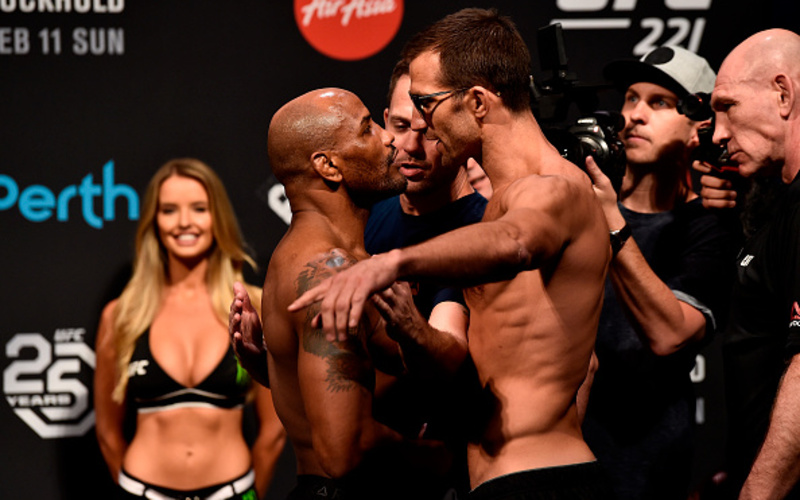 The UFC heads to the Perth Arena in Australia on Saturday evening. Below we will give you a breakdown and UFC 221 Preview.

Since making his professional debut in 2016, Abe has been extremely impressive. This weekend, the 26-year-old will be fighting for the 7th time in less than 2 years. Watching the tape, it’s hard to believe that Abe is still a relative newcomer to the sport. He fights with great composure and although there are some holes in his defensive boxing, he has tremendous hands and is a very precise striker.

Both fighters are at relatively similar stages of their careers, but Luke Jumeau has taken a much longer path to the UFC. Interestingly, 2 of Jumeau’s 4 career losses were dealt by Li Jingliang and Jake Matthews, who will be fighting each other on the main card of this event. I expect Jumeau to hold a bit of a size advantage in this fight. Although nothing stands out about Jumeau’s game, he is a well-rounded fighter and has not shown any blatant weaknesses thus far. With 2 decisions to start off his UFC career, the 29-year-old needs a finish to prove that he belongs in the UFC.

Both of these guys are pretty young but have accumulated a decent amount of UFC experience. Ishihara may have a slight edge in terms of overall athleticism, but Quinonez seems to be the more technically-skilled fighter. Quinonez’ biggest asset as a fighter is his boxing. He has exhibited strong boxing fundamentals and crisp striking. Although both of these fighters entered the UFC as primarily strikers, they’ve both made noticeable improvements to their ground games over the past couple of years.

After getting absolutely dominated on the mat by Gray Maynard, Ishihara bounced back nicely in his most recent bout, picking up a decision over Rolando Dy, and showing off some decent skills on the ground. With 3 straight victories under his belt, Quinonez has gained some nice momentum in the past couple of years. Ishihara certainly represents a step-up in competition for Quinonez.

Here we have two veterans of the sport, in what should be a fairly balanced contest. Pearson has been in the UFC since 2009 and has competed with the best of the best. Hirota has spent much of his career as a journeyman, bouncing around various regional promotions. One thing’s for sure — they always show up ready for a brawl. With 4 losses in a row, Pearson is in desperate need of a win. On the other hand, “Pugnus” is 4-1-1 in his last 6 bouts, although he’s faced a much lower level of competition than Pearson has.

Pearson is a great boxer and should be able to pick apart Hirota on the feet. Hirota should have the grappling advantage but it’s hard to say for sure. Furthermore, Hirota has exhibited a granite-chin throughout his career, so I see this one being decided by the judges’ scorecards.

Once again, a fight between 2 ranked flyweight fighters is buried on the undercard. Nevertheless, this should be a great fight, between a perennial title-contender and the division’s fastest-rising prospect. With just one loss in the past 7 years, Nguyen has just about established himself as one of the best 125ers in the world. The 29-year-old has exhibited great athleticism and a fantastic ability to finish fights, with 13 of his 16 career wins coming by way of either knockout or submission. In order to enter the flyweight division’s monopolized realm of title-contention, Nguyen will need to defeat Jussier Formiga — the division’s premier “gatekeeper”.

Formiga has spent a half-decade hovering on the verge of a title-shot, only to be denied by a future title-contender at each turn. In fact, Formiga’s 4 UFC losses have been dealt by John Dodson, Joseph Benavidez, Henry Cejudo, and Ray Borg — each fighter fought for the championship in their next fight [after defeating Formiga]. Although he’s never been an elite striker, the former jiu-jitsu world champion makes great decisions in the cage and can hang with the best.

With only 1 loss between these two fighters, we are guaranteed to see a high-level bout. It may not be the most entertaining fight, but these are two guys at the top of their games. Kennedy isn’t very refined as a striker, however, his grappling prowess cannot be overlooked. He has coasted to an 11-0 professional record thus far, mainly relying on his wrestling.

Volkanovski is a well-rounded fighter and I expect him to neutralize Kennedy’s wrestling and force him into some striking exchanges. Both fighters tend to spend a lot of time grappling against the cage, so I’m interested to see who wins the grappling battle. Kennedy may have the edge in terms of technical wrestling ability, but Volkanovski’s strength should even things up.

Israel Adesanya is about to send shockwaves through the UFC’s middleweight division. In 6 years as a professional kickboxer, Adesanya compiled a record of 65-5-2. His athleticism and striking ability make him a once-in-a-generation type of prospect. A quick look at his highlight tape will confirm that. Adesanya’s skill set has translated nicely to MMA — he’s racked up an 11-0 record, ending all fights with a KO/TKO.

Stepping into the cage across from the kickboxing phenom will be 25-year-old Rob Wilkinson. Despite his 11-1 record, Wilkinson has some glaring weaknesses in his game, mainly his striking and questionable gas-tank. His biggest asset would have to be his wrestling. Surely, Wilkinson’s only possible path to victory is by taking the fight to the ground. Either way, I don’t think he is a UFC-level fighter and I expect Adesanya to add another finish to his highlight reel.

This fight is a guaranteed banger. If you’ve seen either of these guys fight, then you know that we’re in for a treat. Neither Brown nor Kim are likely to make a title-run, but they both put on a show every time they step into the octagon. Kim should have a fairly obvious size advantage over Brown, and it could pay dividends in the clinch and on the mat. At the end of the day, I believe that Kim hits harder and has a better chin, so I’m expecting him to come out on top.

It’s important to note that there are two fighters named Dong Hyun Kim in the UFC. We will be seeing the lesser known “Maestro”, not longtime welterweight veteran “Stun Gun” Kim.

Since joining the UFC in 2016, Tyson Pedro has been nothing short of phenomenal. He’s quickly established himself as the top Australian prospect and one of the best young light heayvweights in the world. Although he only has 7 professional fights under his belt, he is already a very complete fighter. Of course, he has room to improve, but he’s shown that he can compete with the best. Despite losing to Ilir Latifi in his most recent bout, Pedro gained valuable time in the cage, going to the decision for the first time in his career.

Safarov has compiled an equally impressive record as Pedro, however, one thing that stands out is his overall lack of activity. With just 4 fights since 2012, and over a year since his last bout, you have to wonder how that will affect Safarov’s performance this weekend. He tends to get a bit reckless on the feet and an opponent like Pedro will make him pay for throwing wild haymakers.

It’s extremely impressive that Matthews is only 23-years-old and has already fought in the UFC 8 times. He’s had a successful run, but has faltered against high-level opponents such as James Vick and Kevin Lee. Across the cage from him will be the best Chinese fighter in the UFC, Li Jingliang. Jingliang’s skill set, particularly his striking, has improved tremendously over the past few years. With 4 wins in a row, including 3 finishes, the 29-year-old is surely on the brink of breaking into the welterweight division’s top 15. On the other hand, Matthews’ progress seems to have hit a plateau. He’s leaned heavily on his wrestling and athleticism thus far, but it remains to be seen whether his striking is UFC-quality or not.

Although Jingliang has never been knocked out, he has certainly been rocked a few times. However, he’s shown an uncanny ability to recover and push a high work rate. I doubt that Matthews will be the one to finally crack the chin of “The Leech”. Expect to see a great fight and a clash of styles.

As one of the top heavyweight prospects in the UFC, every Tai Tuivasa fight is a can’t-miss event. At just 24-years of age, Tuivasa boasts a massive frame and sneaky quickness. He will face Cyril Asker, a scrappy journeyman. The result of this fight should be very telling — if Tuivasa is legit, he should have no problem dispatching the 33-year-old, Asker. If Asker wins this fight, he will prove that he belongs in the world’s elite fighting promotion.

Tuivasa’s grappling ability is largely an unknown — if Asker can take the fight to the mat, things may get interesting. Tuivasa should hold a significant strength advantage in this one so I expect him to dictate the fight and get the finish.

As is the case with any Mark Hunt fight, you’re gonna want to tune in for this one. This is a classic matchup of striker vs. grappler. As one of the heavyweight division’s rising stars, Curtis Blaydes can enter the division’s upper-echelon with a win over Hunt. Since turning professional in 2014, Blaydes has steadily improved between each of his bouts. Leaning on his wrestling pedigree, we’ve seen him make significant strides as a martial artist. Hunt has shown some instances of good takedown defense over his career, but I think that Blaydes will be able to take him down and control the fight.

Fans are understandably disappointed that they will not see Whittaker defend his middleweight belt on home-turf, but this is about as good of a replacement fight that you can get. Romero and Rockhold are undeniably two of the most well-rounded fighters in the middleweight division.

After losing a hard fought, 5-round battle to Whittaker last summer, Romero will get another opportunity to win an interim belt, this weekend. As one of the most athletically-gifted fighters in the UFC, Romero has proven to be a nightmare matchup for most of the elite names in the 185 lb. division. Rockhold will need to be extremely careful and take points wherever he can get them. At the end of the day, I’m expecting Romero to pull-off the victory and earn a rematch with Robert Whittaker.

I like to watch MMA and write about it! I run the website cagesidetribune.com but will be primarily focused on writing for MMASucka.