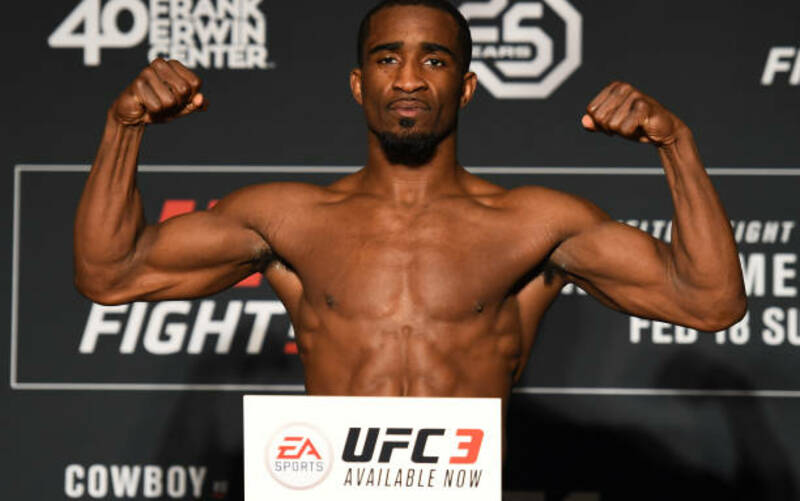 He is known as “Handz of Steel”, that’s right, with a Z. Geoff Neal (8-2) flew under the radar during his 3-0 stint with Legacy Fighting Alliance. The heavy handed Texan, training out of Fortis MMA, turned heads with his first round knockout last summer on Dana White’s Tuesday Night Contender Series.

When natural welterweight Geoff Neal got the call to step in on short notice against middleweight prospect Chase Waldon (11-3), he was working his day job as a server and bartender at a restaurant. The fight was for a chance at a UFC contract, an opportunity to impress UFC President Dana White, along with UFC matchmakers Mick Maynard and Sean Shelby.

For most men, this fight would have been out of the question. Neal had just fought at LFA 16 on July 14th, a mere 11 days before the scheduled bout with Waldon. However, the deadly striker was able to dispatch his last opponent Bilal Williams in less than five minutes. Moving up to middleweight, Neal was not burdened with concern over a second weight cut in two weeks.

Neal felt he could relax and let it fly.

Chase Waldon was the deserved favorite in his originally scheduled bout against Gabriel Checco, and an even heavier favorite over the unheralded and undersized Neal. Waldon was in the midst of an 11-1 streak, the lone blemish coming to Gerald Meerschaert, who has since gone 3-1 in the UFC.

A talented wrestler and grappler, the larger Waldon had success early pressing the takedown and holding Neal against the cage. After an extended effort, Neal was able to get back to his base, dig underhooks, and create separation.

Cool as a cucumber, Neal carefully pressured Waldon, let his hands go, and finished the job in short order.

NEXT FIGHT: vs. Brian Camozzi at UFC Fight Night 126

It’s worth considering that Neal’s hands actually are made of steel. The shot that put Waldon down was glancing, it seemed to just barely land around the guard. It appeared that Waldon was covering up well, but the ground and pound that followed stuck him to the canvas.

Brian Camozzi (7-4 MMA, 0-2 UFC) is a bit of a smaller, upgraded version of his brother, Chris. He’s a more polished striker with a muay thai base, and is no slouch on the ground. His deficiencies are very similar as well, there are definitely some holes in his wrestling game, and he is not much of a presence physically.

The physical mismatch in this bout is going to make the difference. Neal is as sharp as they come with his striking attack, and he’s going to pressure Camozzi to the cage and tee off. Showcased on free TV, Neal is a can’t miss fighter this Saturday night.

You can watch Geoff Neal make his UFC debut vs. Brian Camozzi at UFC Fight Night 126 on Saturday, February 17th, on the Fox Sports 1 prelims. If you want to see the handz in action, tune in around 9:00 PM EST.