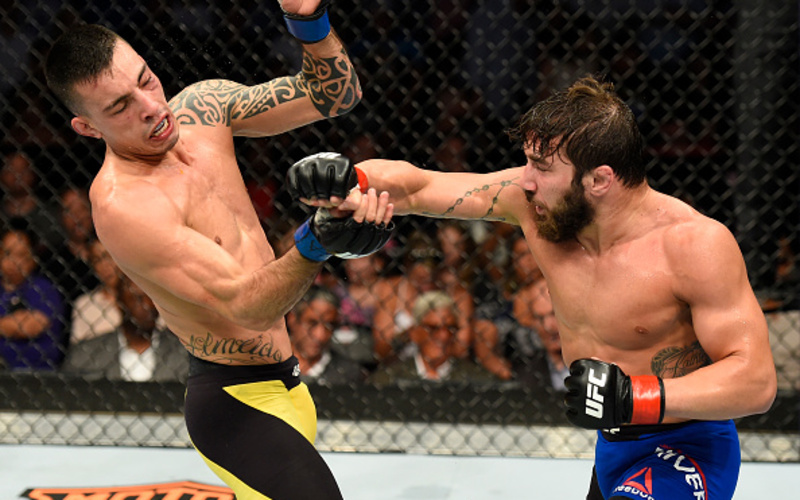 Recently Jimmie Rivera said if he beats Marlon Moraes, he automatically deserves a title shot with “no questions asked.” Looking where he’s coming from, it’s not hard to justify his comments. The fighters above him, Cody Garbrandt, Dominick Cruz, and Raphael Assunção are either coming off of a loss, or were dominated by the champ, TJ Dillashaw.

Rivera is coming into the Moraes fight undefeated in the UFC, which is another strong case for his title shot.

The issue that arises is TJ, Cody, and Dominick all have one loss in a loss-triangle of sorts. TJ lost to Dominick, Dominick to Cody, and Cody to TJ. Assunção was dominated by Dillashaw at UFC 200, but also holds a victory over the champ back in 2013, requiring a tie-breaker.

All of this makes it hard for someone not named Cody Garbrandt or Dominick Cruz to get a title shot.

Comparing Moraes’ UFC opponents, Aljamain Sterling (2-3 last five), John Dodson (3-2), and Raphael Assunção (4-1). Assunção was a controversial split decision loss that many had Moraes winning. Moraes combined UFC opponent record is 9-6, a .600 win percentage. The one thing that kills Moraes is that loss to Assunção in the UFC.

There are levels to this game.

The difference between Garbrandt and Cruz coming off losses are that they’re to a champ and a former champ. They’ve also beat a champ in their last five fights.

Luckily for us, Dillashaw is chasing a super fight with Demetrious Johnson at flyweight and it will give us time for the division to settle a little bit. Assunção also better look at the fight in front of him instead of his title shot he thinks he deserves.

Rivera is undefeated in the UFC but, his body of work doesn’t support his title aspirations just yet. Having your former opponents recent fights under .500 isn’t a very supportive platform to stand on. Beat Moraes then one of the top three, and you can claim your title shot.

Until then, let me suggest this:

Winner of Rivera and Moraes gets Cody Garbrandt. Loser gets Dominick Cruz. Then we revisit who fights TJ next after him and Mighty Mouse throw down.