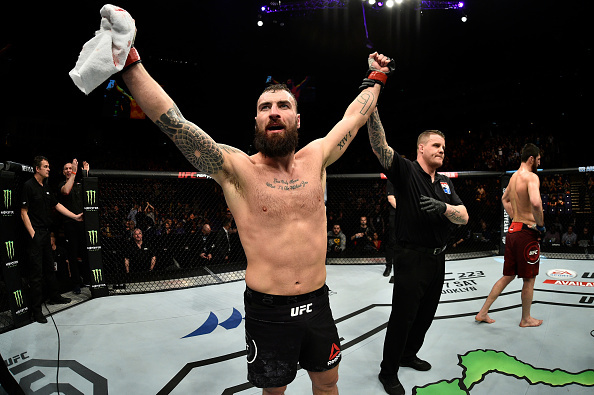 The Octagon returned to London on Saturday as Fabricio Werdum took on rising star, Alexander Volkov. Also, the co-main event saw a rematch between England’s Jimi Manuwa and Poland’s Jan Blachowicz. Rounding out the main card were fights between Tom Duquesnoy and Terrion Ware, and Leon Edwards and Peter Sobotta. The night saw many great fights and great performances from a card that didn’t hold many big names. This card proved that there doesn’t need to be big names in order for it to be entertaining. Here are our UFC Fight Night 127 standout performances.

#1: Paul Craig def. Magomed Ankalaev via Submission (Triangle Choke) at 4:59 of Round 3

Going into this fight, Paul Craig was coming off his first two losses of his career after starting 9-0. He made it clear before the fight that he needed a win against Magomed Ankalaev. He wanted that 10th win to come under the bright lights of the UFC octagon. Craig entered the UFC in December of 2016 and started with a win, but in 2017, he went 0-2.

Late in the round, Craig was on his back and as soon as the 10-second warning sounded, he locked in a triangle choke. With less than ten seconds left, the choke was so tight that Ankalaev was forced to tap with one second left. If Ankalaev hadn’t tapped, he would have easily won the decision. Instead, Craig completed a comeback of the year candidate that is going to be very difficult to beat. He also broke the UFC record for latest finish in a three round fight with one second left on the clock.

In the first round, Werdum took down Volkov with ease early. The first round was spent mostly on the ground as Werdum controlled Volkov. Volkov was able to get up at one point and connected with good shots but eventually ended up on his back again. After the first round, it seemed like Volkov was a little gassed and Werdum was gonna be able to easily control him. In the second round, Werdum took him down a few times, but later on, Volkov’s takedown defense got better and better. Rounds two and three were spent mostly on the feet as Volkov was able to stuff takedowns. Multiple times, Volkov would catch kicks and trip Werdum, who was lay on the ground waiting for Volkov to engage. But Volkov would make him stand up again everytime.

In the fourth round, he tripped Werdum to the ground once again. Werdum tried to make him fight on the ground but was forced to stand up again. Once he stood up, he began to swing for the fences as he realized he was down and needed to win the round. Volkov was able to avoid his punches and connected with a punch that dropped Werdum. He threw one punch to the grounded Werdum and it connected perfectly and shut the lights off for Werdum. Alexander Volkov has made it clear that he’s become a new threat at heavyweight.

#3: Danny Henry def. Hakeem Dawodu via Submission (Guillotine Choke) at 0:39 of Round 1

Coming into the fight, Hakeem Dawodu was looked at as someone who could be the next big thing. He was making his debut against Danny Henry who was coming off a win over Daniel Teymur at UFC Fight Night 113.

The first round started and not many strikes were thrown. About 20 seconds in, Henry landed a hard shot that dropped Dawodu and he immediately jumped on the guillotine. Once he locked it up good, Dawodu had no time to tap as he quickly went to sleep.

Danny Roberts was coming into the fight coming off a brutal knockout loss to Nordine Taleb at UFC on Fox 26. Oliver Enkamp was also coming off a loss to Taleb back at UFC Fight Night 109. Both fighters came into the fight looking for a win having recently lost.

The fight started and the first minute saw nothing but the two fighters feeling each other out. A few leg kicks thrown here and there, but nothing exciting. After about a minute and a half into the first round, Roberts connected with a shot that forced Enkamp to immediately look for a takedown. Roberts was able to defend well and eventually they separated. After separating, the two didn’t throw much again. But then Enkamp threw a body kick that Roberts blocked and Roberts threw a hard left hook that knocked Enkamp down. The ref immediately stepped in to call the fight after that shot.

#5: Charles Byrd def. John Phillips via Submission (Rear-Naked Choke) at 3:58 of Round 1

After two successful showings on Dana White’s Tuesday Night Contenders Series, Charles Byrd was finally making his UFC debut. Across the cage was another fight who was also making his debut, John Phillips.

The fight started and Byrd immediately shot for a takedown and got it. After getting the takedown, he quickly got into full mount and started throwing elbows and punches at Phillips. He connected with many hard shots as Phillips tried to escape from Byrd. Byrd was completely dominating Phillips on the ground. With about 1:20 left in the round, Byrd got Phillips’ back and quickly locked in the rear naked choke. The squeeze was so tight that Phillips was forced to tap, awarding the victory to Byrd in his debut.

Looking back at an exciting card form London, these were the five performances that stood out over the rest. Once again, next week there will be no UFC card, nor will there be one the week after, but there will be in three weeks. In three weeks, the most anticipated fight of the year goes down as Tony Ferguson takes on Khabib Nurmagomedov for the lightweight title. Plus, a rematch between strawweight champion, Rose Namajunas and former champion, Joanna Jedrzejczyk. Join me in three weeks as we look back at UFC 223 and determine the five standout performacnes.