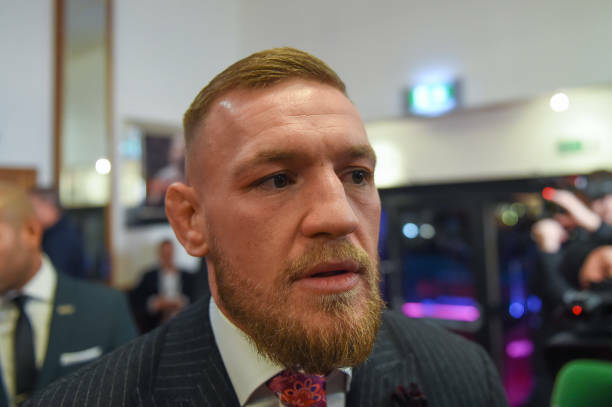 Conor McGregor made a surprise appearance at the UFC 223 media day, and to put it lightly, all hell broke loose – as it usually does when ‘The Notorious’ arrives. So much hell that the NYPD has a warrant for Conor McGregor’s arrest.

McGregor and his team of thugs, including Artem Lobov, were reportedly let-in to Barclay’s Center in Brooklyn, New York after a group of TheMacLife staff, who were credentialed media, offered access to the arena. McGregor and his thugs were seen in various videos throwing trash cans, barricades, and chairs.

Here is a video of McGregor throwing what appears to be a barricade:

By the time he left, there were damaged vehicles. pic.twitter.com/WkTKBnV46I

Many considered this nothing but a minor breakdown by McGregor – that is until McGregor and his team charged a bus full of UFC staff and athletes – injuring them in the process. UFC President Dana White reported that Michael Chiesa is badly cut-up, and a UFC staff member likely broke his knuckles as a result of the projectiles being thrown into the bus. The extent of Chiesa’s injury is currently unknown, and therefore makes the current status of his tilt against Anthony Pettis also unknown. Furthermore, White confirms that UFC Strawweight Champion Rose Namajunas was nearly injured by a projectile thrown by McGregor’s team.

Below is a video of the altercation with McGregor, his team, and the bus filled with UFC staff and athletes.

@TheNotoriousMMA is about that life pic.twitter.com/kLRbMVzSzk

White provided quotes to MMAjunkie shortly after the altercation. Below are some of the highlights.

“[Conor and his team] stormed the building, got into the loading docks when the fighters were getting into the busses, and started to attack the busses – throwing trash cans and dollies – stuff like that. Broke a window, cut Michael Chiesa pretty bad.” White said.

“Obviously everybody is pretty shaken-up when 30 thugs storm a – you know.” Dana paused. “These guys are all cutting weight and getting ready for a fight. This is the most disgusting thing that has ever happened in the history of the company.”

Shortly after, it was reported that Lobov was pulled from the UFC 223 card – likely as a result of today’s altercation. As for McGregor, the NYPD is still searching for him. We will continue to update this post as new information is provided.