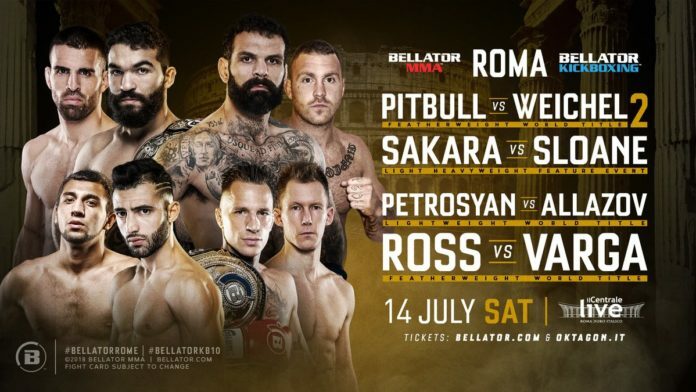 Bellator is primed for another Summer return to Italy, this time in the country’s capital; Rome. Live from the Il Centrale Live Roma – Foro Italico on Saturday, July 14. They bring a doubleheader with them in the form of Bellator 202 and Bellator Kickboxing 10. Two bouts have been announced for each so far.

“From the beginning of our international expansion, Italy has always played an integral role in our growth,” Bellator President Scott Coker said. “Following successful events in the gorgeous cities of both Florence and Torino, it only made sense to bring a card to Rome, the home of the Colosseum, a city that has seen warriors do battle since 80 AD.”

Patricio “Pitbull” reclaimed the featherweight strap by defeating Daniel Straus via submission in round two in April of last year. This netted him his fourteenth victory inside the Bellator cage, making him the winningest athlete in promotional history. On his previous run as champion, “Pitbull” knocked out Daniel Weichel in round two at Bellator 138 in 2015.

A massive fan-favorite in Italy, Alessio Sakara is currently 2-1 in the Bellator MMA cage. He has knocked out Joey Beltran and Brian Rogers but was quickly defeated when he challenged middleweight champion Rafael Carvalho late last year.

Jamie Sloane will be making his Bellator debut when he looks to play the role of spoiler in Sakara’s home country. With a winning record of 8-4, the BAMMA veteran has also made appearances at heavyweight and middleweight since beginning his professional career in 2014.

Referred to by his fans as “The Doctor,” Petrosyan is one man you do not want an appointment with. The top-ranked Armenian-Italian striking ace has put together an incredible 46-fight unbeaten streak, cultivating an extensive trophy case that includes multiple championship belts as well as “Kickboxer of the Year” accolades in both 2011 and 2012.

Currently, in the midst of a 27-fight winning streak of his own, the 24-year-old Allazov has not suffered defeat since 2014, winning the K-1 super middleweight championship along the way. Hailing from Belarus, Allazov brings a Thai boxing style to the Bellator Kickboxing ring.

A two-time Glory featherweight champion, Gabriel Varga signed with Bellator in March of 2017, immediately making it clear that his sights were clearly set on competing against Ross. Italian fans may remember the 32-year-old Canadian from his Bellator Kickboxing 8 appearance, where he stopped Roberto Gheorghita in the second round of action.