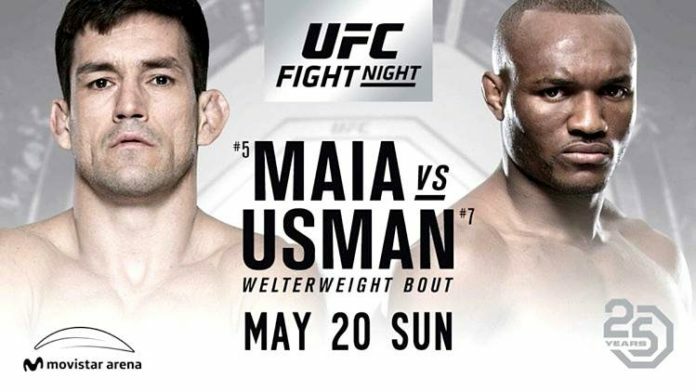 UFC Fight Night 129 is upon us this week! The card, topped by a welterweight bout between Demian Maia and Kamaru Usman, will be live from the Movistar Arena in Santiago, Chile. While many fighters on the card have grasped the idea of branding via entrance music, there are still people needing help with their UFC Fight Night 129 walkout songs. With uniforms now de rigeur for UFC athletes, one of the few ways they have left to stand outs individuals is with walkout music. That’s why I’m here. As MMASucka.com‘s resident musicologist, I’m here to offer suggestions that would help these fighters become more memorable as a brand. I’m even doing it publicly, for your entertainment. So, without further ado, here… We… Go!

What he last walked out to: “Congratulations” – Post Malone feat. Quavo

What he should walk out to next: “Professional Killer (Sascha Konietzko Remix)” – KMFDM

I said it when Drakkar Klose walked out to Post Malone, and I’m going to say it again, the dude is the audio equivalent of Quaaludes. Aural downers, man… Even if Dominick “The Devestator” Reyes has walked out to “Congratulations” more than once, it’s not something I’d recommend further. If he needs something that’s a lower tempo to keep him from burning out on adrenaline on the way to the cage, I get that. But there’s still songs that can keep the crowd from falling asleep before the start of the fight and lasting until Reyes potentially notches his sixth finish in a row. That song is “Professional Killer” by German industrial legends KMFDM, specifically the Sascha Konietzko remix. Anchored by soothing female vocals in the verses before raising up into a rousing chorus, this would help set Reyes apart from the masses of fighters making their way out to mumble rap these days. Listen below.

What he last walked out to: “Ambition” – Kodak Black

Claudio Puelles has the same problem as so many other fighters. They walk out to contemporary hip-hop, with the same low-energy beats. So who is new that can help set Puelles apart from his peers and stand out with his walkout? Well, I think that would be Gensu Dean, with the hard-hitting banger, “G.O.D. (Game of Death).” Listen below and hear for yourself.