RIZIN 10 was just last weekend, but the announcements for RIZIN 11 have already begun.

The first fight announced for the card is a big one in the flyweight division; Kyoji Horiguchi vs. Hiromasa Ogikubo. Also on the card, combat sports royalty in the form of the legendary Mirko Cro Cop. And, on the opposite end of the spectrum, combat sports prodigy Tenshin Nasukawa will also compete at the event.

These announcements were made at a press conference in Japan.

The promotion also started to make announces for their September show – RIZIN 13. They will hold a kickboxing tournament that will include at least a few RISE fighters by the sound of it.

The RIZIN Kickboxing tournament will feature 8 men, and the quarter-finals will take place at RIZIN 13 in September. The winner of the tournament will, by the looks it, have to win their semi-final and final on the same night at the always loaded NYE show.

Kyoji Horiguchi will make his kickboxing debut on this September card in the tournament. So, no kickboxing warm-up for Horiguchi. He will fight old rival Ogikubo in an MMA bout in July, and it’s right on to the kickboxing tournament in September afterward.

After leaving the UFC on a three-fight win streak, Kyoji Horiguchi (24-2) began to make waves immediately in his return to Japan.

Upon signing with RIZIN Fighting Federation, Horiguchi was put into the deep end right away. He made his debut and handily beat down longtime DEEP title-holder Yuki Motoya to earn a well-deserved unanimous decision win.

Horiguchi competed in his first fight since the tournament win, just 10 days ago. He did the unthinkable and knocked out fellow UFC-veteran Ian McCall in just 9-seconds. The American Top Team representative will look to make it 10-straight wins when he takes on Ogikubo in July.

Fighting out of Paraestra Matsudo in Matsudo, Japan, Hiromasa Ogikubo (17-3-2) enters the contest as the #2 flyweight in Japan – only behind Horiguchi.

He is a former VTJ tournament winner and Mobstyles bantamweight champion but currently holds the Shooto flyweight title.

Ogikubo formerly competed on TUF 24, making it to the finals before losing to Tim Elliot. He seemed like shoe-in signing for the UFC after the season ended, and was irrefutably the most deserving outside of Elliot. But, somehow, the UFC did not take notice and sign him.

So, he returned to Shooto in 2017 and defeated UFC-veteran Danny Martinez before defending his title with a first-round submission win against Tadaaki Yamamoto in October. 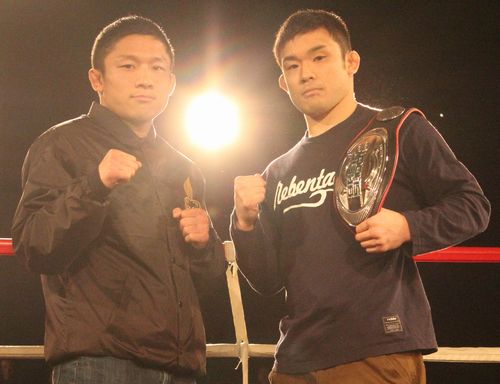 The two have fought previously, back in 2013.

Both were up-and-comers, with Ogikubo sporting a 10-2-2 record opposite Horiguchi’s 9-1.

Even back then, Ogikubo entered the contest proudly holding the Shooto title. Ultimately, he went on to lose it to Kyoji Horiguchi via submission.

Funnily enough, this is the sole submission win of Horiguchi’s career. Ogikubo was a good grappler back then but has gone on to become one of the best grapplers in the world at his weight class.

No opponent has been revealed for Mirko Cro Cop (36-11-2, 1NC) as of now. But his confirmation for the card is a very, very welcome one.

The 43-year-old Croatian legend is quietly on the best run of his entire mixed martial arts career. He has won 8-straight, all via finish. This includes a 2016 RIZIN Grand-Prix win after defeating the likes of King Mo and Amir Aliakbari, as well as a UFC win over former foe Gabriel Gonzaga.

Along with his RIZIN 11 inclusion, Cro Cop is also currently set to face former opponent Roy Nelson later this month at Bellator 200 in London. He will look to get revenge on Nelson for a loss in 2011, and this will be a bout to determine who the official alternate will be in Bellator MMA’s ongoing heavyweight grand-prix.

Lastly, we have 19-year-old phenom Tenshin Nasukawa slated to make his return to the ring at RIZIN 11.

He is on a spectacular undefeated run in kickboxing, but, hopefully, this upcoming RIZIN 11 bout will see Tenshin return to the MMA ruleset before he enters any RIZIN kickboxing tournaments later this year.

He is a solid 4-0 in mixed martial arts, and as yet to truly been tested yet. So, after he makes an appearance or two kickboxing for RISE, let’s see what he has in store for his return to RIZIN.

RIZIN 11 is scheduled to take place on July 29, live from the famed Saitama Super Arena in Saitama, Japan.

If the poster revealed last week is any indication, look out for upcoming fight announcements for Yusuke Yachi, Kanna Asakura, and Tatsuya Kawajiri.

Why do so many young MMA prospects fail