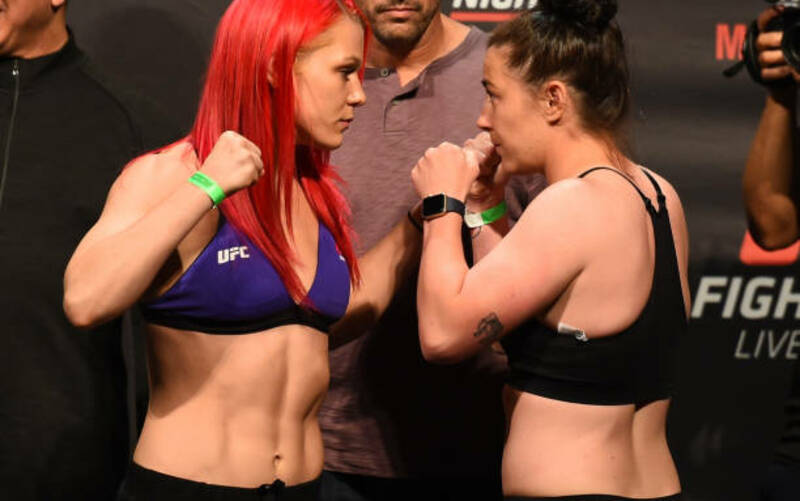 American Top Team is known for developing and coaching the best talent in the world, both male and female. ATT is home to women’s UFC world title holders such as Joanna Jedrzejczyk and Amanda Nunes. Flyweight Gillian Robertson looks to continue that strong women’s tradition at American Top Team. The young talent has the makings to bring the flyweight title to the team.

“I got into MMA when I was 16 years old,” Robertson said to MMASucka. “For some reason I had it in my head that I wanted to do kickboxing so my parents signed me up for a cardio kickboxing class at Din Thomas’ gym. Over the years I just stuck with it and continued to do more and more at the gym until two years later I had my first amateur fight. After that I was hooked.”

That first bout was at Combat Night against Suzanne Simpson, where Robertson won by split decision. Being coached by one of the best in the business has been a huge aid in Robertson’s development. “Din is definitely someone who helped build me physically and mentally as a fighter,” Robertson stated. “He’s put in endless hours of drilling and studying in order to help me.”

Robertson would spend a little over the next two years on the amateur circuit compiling a record of 9-1 before taking her first professional fight at Island Fights 37. Though Robertson would suffer a loss in her very first professional bout, she would go on to win three of her next four. The only loss along the way would be to future UFC standout Cynthia Calvillo by decision. Robertson’s big break on the world stage would come as it does for many, through The Ultimate Fighter show.

The Ultimate Fighter has been a platform many fighters have used to improve their skills. “The TUF experience was 100% life changing for me. It was great experience in general from the coaches and the girls that I was able to work with to the doors it opened for me,” Robertson told MMASucka. “I’m extremely thankful for the tough experience.”

Though Robertson would lose to Barb Honchak, she would still get her chance to fight on the UFC stage. Robertson took on Emily Whitmire at The Ultimate Fighter 26 Finale. Robertson was able to secure the victory with a first-round submission. That victory propelled her to a huge opportunity, taking on a UFC newcomer, the highly hyped Molly McCann at UFC Fight Night 130: Thompson vs. Till on May 27, 2018.

Robertson dominated the matchup over the hometown favorite and secured her second straight submission victory, this time in round two.  So what is next for the American Top Team rising star? “I’m not too sure what’s next yet, but I’m ready for anything,” Robertson said. “Just waiting for the call from Mick Maynard but I have no injuries and I’m ready to go.”