The RISE 125 show in Chiba, Japan was headlined by RIZIN superstar Tenshin Nasukawa, who won an absolute war vs. Rodtang Jitmuangnon.

Also on the loaded card was Riri Nasukawa – Tenshin’s 15-year-old sister! See how she did here.

Tenshin Nasukawa will compete in the upcoming RIZIN KICK Tournament in September, but aside from him and – likely – Horiguchi, no other names have been announced.

Thankfully, RISE 125 will begin to answer some questions. As a four-man, one-night tournament goes down to crown a winner, earning them a spot in the upcoming tournament alongside Japanese superstars.

In the first semi-final of the night, Miyazaki Shuto picked up a very convincing unanimous decision win over 2x Tenshin foe (in both MMA and kickboxing) Yamato Fujita.

Fujita was very game. And he threw his power punches throughout the contest, but Shuto technically shut him down throughout. Technique beat power here handily. The low kicks of Shuto took a toll on Fujita, and it’s a credit to the Reversal Gym rep that he made it to the scorecards given the fact Shuto turned his leg into mush.

Very impressive showing from Shuto, and a good introduction to show people unfamiliar with him what he can do. He now moves on to the finals where he will face either Kento Haraguchi or Momotaro for a chance to compete in the RIZIN KICK Tournament.

The second semi-final wasn’t quite as entertaining as the first, but it was solid nonetheless.

KICK Lab’s Kento Haraguchi took on Oguni Gym’s Momotaro. And despite Momotaro being the more technically sound, Haraguchi kept the pressure on throughout and mixed up his attack with some wild techniques, as well.

Whereas Momotaro stuck to his very, very good fundamentals, Haraguchi kept him guessing throughout and didn’t give him much room to breathe. This ultimately resulted in what sounded like a unanimous decision win for Kento Haraguchi.

Haraguchi now faces Miyazaki Shuto in the finals for a chance to compete in the RIZIN KICK Tournament. 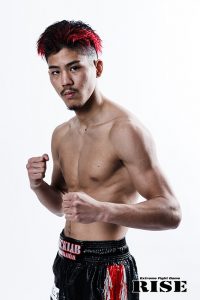 In a very closely contested fight, Kento Haraguchi scored a knockdown in round three with a glancing axe kick to the had of Shuto. This is seemingly what sealed the deal in an otherwise close fight.

That is two wins in one night for the ACCEL Featherweight Champion, and he will now compete in the upcoming RIZIN KICK Tournament alongside some massive names in Japanese kickboxing & MMA.

Janet Todd On All Kickboxing, Muay Thai Contenders: ‘I Welcome The Challenge’

Jessica Rose Clark Looking to Bounce Back at UFC 276