Cage Titans 39 live from Pinz in Kingston, Massachusetts. The event marks the first time the Massachusetts promotion has switched venues since 2012 at Cage Titans 12. CTFC 39 also marks a showcase event for the new venue. As noted before by promotion owner and match-maker, Mike Polvere, the home of Cage Titans is in Plymouth at the famed Plymouth Memorial Hall.

Tonight’s card originally featured 9 fights but unfortunately, a short notice withdrawal forced a highly anticipated matchup off the card. Taylor Thompson suffered an injury to her foot during fight week and subsequently, her bout against Kylie O’Hearn was scraped. O’Hearn and Thompson are the amateur flyweight and bantamweight champions, respectively. On top of their champion status, both women were highly ranked in the New England region.

The remainder of the card features 8 fights including the main event showdown between Peter Barrett and Connor Barry. Barrett vs. Barry pits a New England MMA veteran in Barrett against an up and coming fighter in Barry. Barrett holds a record of 9-2, while Barry is less experienced with only 6 fights and a 4-2 professional record.

Elsewhere on the card, Randy Costa makes his return to mixed martial arts competition as he takes on Stacey Anderson. Costa first appeared on the scene when he made his amateur debut at Cage Titans 18. There he defeated Ryan Pompey by a quick KO finish. Stacey Anderson makes his second appearance for Cage Titans tonight. In his first appearance, Anderson took on Jeff Perez on short notice at Cage Titans 38, effectively saving Perez’s bout from being scrapped. He now has a full fight camp to prepare for the debuting Costa.

Amateur catchweight bout: Aaron Hughes def. Xavier Cardona via KO at 0:07 of round 1 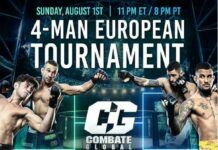