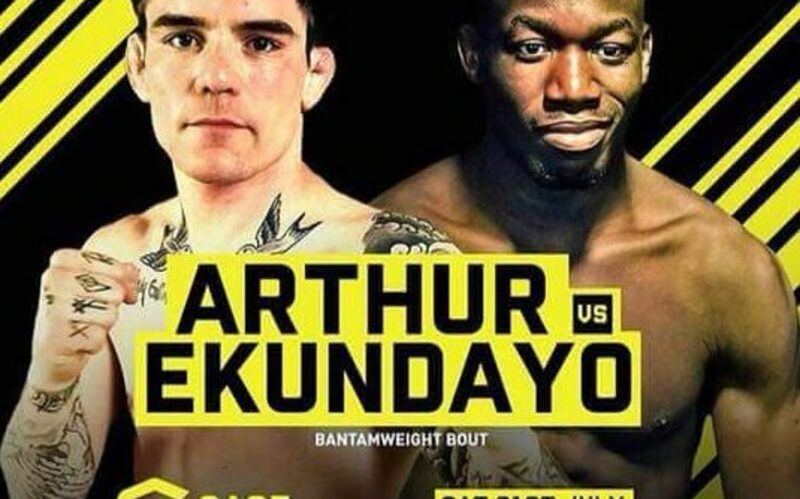 Business couldn’t get much better for Cage Warriors 95’s Mike Ekundayo. The Team Titan bantamweight is only a few days away from a high-stakes matchup in London, England. Only it isn’t the first major opportunity earned in the city he calls home. It isn’t even the first of this summer.

Just as the summer months began, Ekundayo competed at the landmark event, Bellator 200. There he defeated Tom Mearns by 2nd round TKO. It was the fighter’s first appearance via mass live stream. While the moment was big, it failed to carry any emotion dissimilar to previous performances. So much so, the only trace of feeling it left was that of monotony, a few minor details aside.

“I’ve spoken to a few of my training partners and they’ve asked me the question, ‘Would you be able to cope under even bigger lights than Rise of Champions [A regional promotion based out of South England and run by Team Titan coaches Mickey Papas and Brad Pickett]?’ I always said, ‘Ah, yeah’, Ekundayo told MMASucka. “I still have to perform the same if one person is watching or if one million people are. That’s always been my answer, but the proof is in the pudding. It’s easy to say these things, but to do it is another thing.”

His cerebral approach to fighting and preparation among other factors has elevated him from the regional scene to Bellator 200 and now a contract with the highly respected European promotion, Cage Warriors.

The situation behind this ruckus of a year takes more than a moment to understand. Ekundayo spoke about the circumstances of his Bellator matchup previously with MMASucka. Originally, the London resident received the Bellator bout agreement after a teammate withdrew with an injury. At this point, Ekundayo already earned the Rise of Champions bantamweight title and booked his fight with top European bantamweight Ed Arthur for Cage Warriors 95.

“I knew what the next step will be after that. So I just blocked it out, I didn’t let the pressure of having two fights let me crumble. I just saw it as I’ll deal with this one first, God willing I win, [then] deal with the next one.”

In Ekundayo’s mind, Arthur has an established name within the European region, yet, his name is developed more than his skills. The undefeated bantamweight admitted once Saturday comes to pass, his matchup against Tom Mearns will have proved more challenging.

“He’s a name. That’s pretty much it, he’s a name,” Ekundayo said. “I really believe that the last fight was a lot tougher than this one as well. It’s the same again with the promotions, it’s now the same with the opponent. Being in there with harder people, not to say that I’m taking him lightly. I don’t take anyone lightly but I’ve been in there with tougher characters. It’s nothing new. He’s not going to produce anything that I haven’t seen before.”

His experience at Bellator 200, against Mearns, only intensified his confidence. A confidence drenched in ripe sweat, painful frustration, and years upon years of meticulous study. This evident mental toughness stems far further than the reach of which online research is perceived to provide.

One thing that did weigh on him was far from the fight: food. Due to his hectic schedule, and constant preparation, his food consumption is less than desirable.

“So I’m just thinking like, ‘What? So that means I can’t eat again?’ that’s how I see it. It’s not the training or anything because I’ll be training regardless. It’s just the food, I want to eat, but I can’t so that’s just the main thing.”

Everything else fits into the mold of business. In all aspects of preparation and fighting, his approach is similar to that of a CEO. Nothing in the realm of his profession slips through the cracks. Each meal, each session, each relaxation period is monitored like a dying shareholder price. For some, fighting is a job. And for others, like Mike Ekundayo, it is a passion.

Now all that is left for both Arthur and Ekundayo is the battle for the top rung of the Cage Warriors bantamweight ladder.