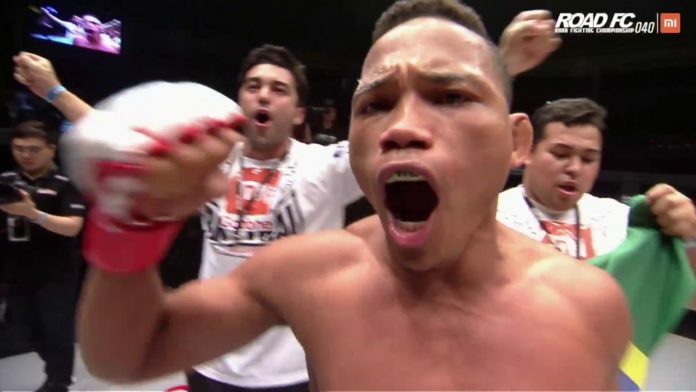 As previously mentioned, of the stellar 10-fight RIZIN 11 card, one fight is arguably better than all the rest. That is, of course, a lightweight banger between Daron Cruickshank and the relatively unknown Tom Santos.

Brazil’s Tom Santos is not a recognizable name in the MMA world, even compared to the likes of Daron Cruickshank. Because of this, it seems as though this fight is being completely overlooked. And that is a shame.

His 9-5 record may not stand out on paper, but if you look deeper and watch his fights you will see why a guy like him opposite Cruickshank could spell trouble for the American.

The main talking point regarding Tom Santos is without question; power.

Here we’re gonna take a look at his last five fights, in these he went 4-1. We will discuss his strengths, his weaknesses, and everything in between.

At 37-years-old, Nam has fought all over the world. In the UFC, ROAD FC, M-1 Global, and more. As a veteran of nearly 30-fights, the man is known for his toughness. This is what gave him the moniker of “The Korean Bulldozer.” In those 30-fights, he has been knocked out two times – but we’ll get to that.

The two first met at ROAD FC 38 in April of last year. One could argue that this was Santos’ introduction to truly high-level competition. Prior to this, he did fight Yasuaki Kishimoto under the HEAT banner, and Kishimoto entered the fight with a record of 20-7-2. But heading into the first meeting with Nam, it was fresh off his stint in the UFC.

Early on in their initial meeting, Nam took Santos to the mat and was content to work from guard throughout. Santos is a very solid grappler defensively, though. So the Korean couldn’t do much and was even eventually swept by the striker in the final ten seconds.

Round two is when we really see what Santos can do.

After spending multiple minutes stalking the veteran around the cage in round two, Santos finally uncorked with a piston right-hand, dropping Nam. Smelling blood, the Brazilian slugger pounced on him and knocked him out with the vicious follow-ups.

This is the first time in Yui Chul Nam’s career that he would lose by knockout. The Brazilian Bulldozer was better than the Korean Bulldozer on this night.

Have no fear, though. Nam was given a chance to avenge this loss in an immediate rematch just three months later. This fight will fit into a GIF.

If I told you that staredown lasted longer than the actual fight, would you believe me?

Yui Chul Nam came out highly aggressive, clearly looking to avenge the defeat he just faced courtesy of Santos a few months prior. Well, the overaggressiveness cost him.

He made arguably the biggest mistake imaginable when facing Tom Santos, he went in the pocket and decided to trade. In the time it took Nam to throw one strike, Santos hit him with a three-piece, connecting on the shoulder for the first two strikes, but hitting the chin of Nam on the third with a right hook.

This, of course, sent “The Korean Bulldozer” reeling, but as he did this Santos hit him with a right-hand similar to the one landed in their first fight. Dropping him again, and stopping him with the follow-ups – again.

There you have it. In 30-fights, Yui Chul Nam has been knocked out twice – one of those being in just seven seconds. Tom Santos is responsible for both of those. That is quite a feat.

As promised, we’ll also cover Santos’ losses. As well as his weaknesses. And we see both of those here.

After two starchings of a veteran the caliber of Nam, there was no more messing around when it came to matching up Tom Santos with studs. He next fought a veteran of 40-fights; Ronys Torres – who entered the contest 35-5.

This fight was a part of ROAD FC’s $1 Million Lightweight Grand-Prix last year.

Torres is a Nova Uniao veteran who, heading into the night, won ten-straight. He is a beast on the ground, and Santos was forced to defend a takedown early. Eventually, however, Torres was able to complete a nice single leg attempt.

Santos spent the next three minutes showing off his ground defense. Torres went for multiple kimuras, was continually looking to advance position, and still, Santos was able to defend the submission attempts and continue getting Torres back inside of his guard.

Well over three minutes later we saw Torres get into mount, and Santos immediately tried to scramble out of there but was unable to do so. As Santos began to panic, Torres was able to get a hold of the arm to force a tap with less than one minute remaining.

In over forty career fights, Torres has won by submission eighteen times. So, frankly, the fact that a guy who is purely a striker was able to defend submissions and whatnot from his back for over three minutes with an aggressive grappler like Ronys Torres on top of him is still quite impressive.

But, regardless, it is here where we see Tom Santos one glaring weakness as a fighter. Though he is not a bad grappler, all five of his career losses came against grapplers. With the most recent being this defeat to Torres.

After the previously seen 2-1 run in ROAD FC, the young Brazilian striker traveled to Japan for a two-fight stint in Pancrase. This, of course, his two most recent fights that we’re about to get to right now.

This time he fights an 11-2 Reversal Gym rep in the form of Yusaku Inoue. When compared to his two previous opponents mentioned above, Inoue is quite different. He is a lot like Tom Santos in some ways, in fact.

The first round consists of Inoue throwing some of his signature jump knees as well as working heavy on the lead leg of Santos. But the Brazilian stalks him constantly and forces some heated punch exchanges throughout.

Later on in the round, Inoue decides to get aggressive from the clinch and attack with knees. This eventually leads to a brief break before we see Santos slip and Inoue begin to put the pressure on.

As both fighters grabbed a single-collar, they start to throw down hockey fight style – think Frye/Takayama. But Inoue nopes out real quick when he feels the power of Santos.

The two, to no one’s surprise, close out round one with nice exchanges. This includes both men attacking the body with some hard kicks as well.

Round two is when things start to get relatively one-sided for Santos. He has Inoue bleeding from the mouth and breathing heavy, but the Japanese slugger won’t back down. He is still trying to swing and make something happen.

Ultimately, after battering Inoue throughout and dropping him with a hook, Tom Santos finishes the fight following two uppercuts. As much as a warrior like Inoue wants to try, these fighters just can’t take Santos’ power for too long. And this is one of the best examples of that.

Here we are looking at a situation similar to the one we saw with Yui Chul Nam.

Yusaku Inoue may not be as reputable a name as Nam, but for those who are familiar with him, he is known for his striking, his power, and his toughness. In 15-fights, one man has been able to knock him out – Tom Santos.

Hell, no one was even able to outstrike Inoue until he faced Tom Santos. That round two is the biggest beating we’ve ever seen Inoue take. And that’s worth something.

Finally, we take a look at Tom Santos’ most recent fight.

At Pancrase 296 in May, Santos took on near 40-fight veteran Kenichiro Togashi, a grappler out of Paraestra Hiroshima.

Despite having a pretty solid boxing base, Togashi is a grappler at heart. Relying heavily on his judo and BJJ game throughout his 17-year career.

Santos entered the fight with title aspirations, and perhaps to his detriment seemed to be looking past the veteran Togashi.

Santos worked the lead leg early, and Togashi seems wary as he has never faced a hitter quite like Tom Santos despite his lengthy career.

He connects on the right-hook, sends Togashi reeling, whiffs on the straight-right before scoring the KO with yet another uppercut.

And just like that, Tom Santos hands Kenichiro Togashi his first real KO loss in six years. Showcasing his stiff leg kicks and lightning fast right-hands in the process.

Do not sleep on Tom Santos.

He is a big lightweight, a lengthy lightweight, and can do damage from everywhere. Fighting him at a distance? He will batter your legs and time his devastating straight-right. Get in close? He will tag you with hooks until you get the hell out of there like Yusaku Inoue or die trying. Shoot in for a takedown? Be ready to eat a right uppercut for your troubles.

He is fighting Daron Cruickshank, a fellow (albeit different) striker. So, takedowns should not be an issue. But even though ground is far from Santos’ strong-suit, he is a physical powerhouse, and he will not be easy to dominate or submit on your first few attempts. Just ask Ronys Torres, one of the most high-level grapplers in the division.

At 33-years-old, he may not be considered a “prospect,” but he is a complete fighter and an absolute wrecking ball that cannot be overlooked against any man who plans on striking with him – this includes Daron Cruickshank.

He is one of the hardest hitting lightweights around, and he is a problem. Expect him to show you exactly why on July 29.