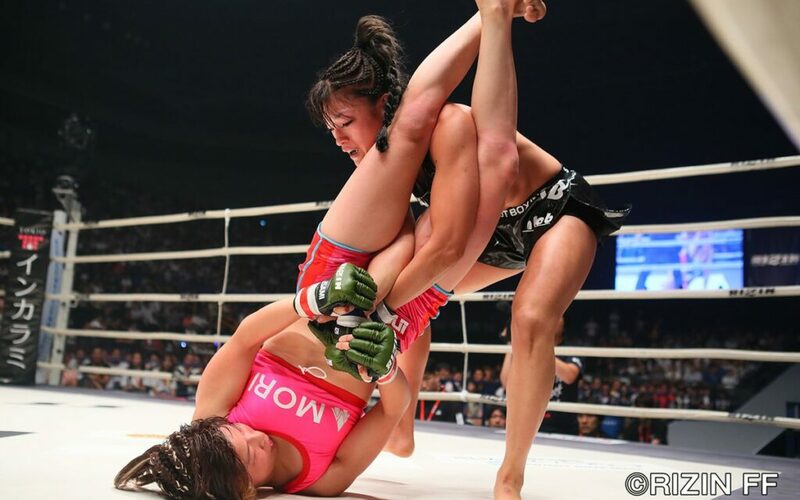 RIZIN 11 went down late last night/early this morning. Perhaps overshadowed by UFC Calgary, the Japanese-based juggernaut took to the Saitama Super Arena with an arguable Event of the Year contender.

There were ten fights in total. One kickboxing bout and nine stellar mixed martial arts fights. What we saw was a night jam-packed with wild fights, brutal finishes, and one stinker.

Let’s do a quick recap of the event. Starting from the main event to the show opener. If you want the short version of this in the form of results, I got you.

The main event of the night was an atomweight rematch between 20-year-old wrestler Kanna Asakura and 27-year-old Shoot Boxing star Rena Kubota.

Each lady is one of the biggest stars in RIZIN Fighting Federation, and prior to their initial meeting in December, RENA was a big-time favorite against the then tournament underdog Kanna Asakura.

In this meeting, we saw a much-improved Rena Kubota and overall a much better fight. RENA was able to land her fair share of shots on the feet, but Asakura was relentless with her takedown attempts and was able to put in work everytime the fight hit the mat.

Submission attempts, ground-and-pound, and determination wound up securing the win for Asakura. She keeps up her winning ways, netting her eighth-straight victory and securing win #2 against stand-up technician Rena Kubota.

Kanna Asakura improves to 13-2 and continues to impress, whereas Rena Kubota falls to 7-2 with both losses coming against a hungry Kanna Asakura.

Much like the night’s headliner, the co-main event was a highly-anticipated rematch. But this one had far more questions behind it.

Unlike Asakura and RENA, who had just fought this past December, Kyoji Horiguchi and Hiromasa hadn’t fought since a 2013 Shooto title fight. Both men have been on a roll since then following Horiguchi’s second-round submission win in 2013.

It was intense as the #2 flyweight in the world, Kyoji Horiguchi, stood across the ring from his old rival – two-division Shooto title-holder – Hiromasa Ogikubo.

Pre-fight Ogikubo spoke about having no desire to stand with Horiguchi like he did in the first fight. We saw him looking to go for takedowns immediately, and even shockingly drop the stellar striker in Horiguchi.

As the fight progressed, Horiguchi began to take over. Using his slick striking game to cut open Ogikubo, coupled with a few nice moments of ground-and-pound plus a vicious soccer kick to the face of Ogikubo as he was essentially doing a headstand in the corner.

It was a very solid all-around performance by Kyoji Horiguchi as he wins his tenth-straight against a wildly game Hiromasa Ogikubo. Both men entered the night on a roll with big win streaks, but only one man could leave with his intact.

Kyoji Horiguchi jumps to an awesome 25-2, putting Ogikubo at 17-4 in the process.

At light heavyweight, we saw a wild one. Both on paper and in reality.

Very early on in the contest, we saw Cappelozza land a clean jab, rocking Procházka in the process. The hit brought the best out of Procházka, as it turned him into the violent Czech badass RIZIN fans have come to love.

Jiří Procházka allowed being rocked to fuel him, as he returned the damage with an onslaught of punches that eventually had Bruno Cappelozza sleeping on the canvas, with half of his body hanging out of the ring.

A veteran of 25-fights at just 25-years-old, Jiří Procházka continues to impress. He improves to 21-3-1 with 18 wins via knockout. The Brazilian knockout-artist loses his second outing inside a RIZIN ring, dropping to 10-5 overall.

Up next, the high-point of the night to most.

Japanese MMA legend, “The Fireball Kid,” Takanori Gomi returns once again to take on a fellow slugger in the form of Melvin Guillard.

A decade ago, this fight would have been one of the most highly-anticipated lightweight battles of all time. In July of 2018, however? Not quite.

On this night, both men were in desperate need of a win. A legend of Japanese MMA & the sport in general, Takanori Gomi entered the bout having lost six-straight – all in the first round – and winless since a 2014 decision victory over Isaac Vallie-Flagg. “The Young Assasin” Melvin Guillard is in a similar situation, having lost seven-straight and also winless since 2014.

In a fight where two men absolutely needed the win, they weren’t shy to go all-out and brawl. And that is exactly what they did.

It was a one-round slugfest between two gritty veterans who were in a must-win situation. We eventually saw the two exchange heavy shots before Gomi’s leg seemed to buckle, indicating a potential injury to the leg of the “Fireball Kid.”

Noticing this, Guillard attacked the leg and seemed to rock Gomi even further with a right-hand. This lead to Takanori Gomi going straight-up vintage Gomi, pouring it on Guillard for the vicious KO against the ropes.

To the MMA hardcore, it was absolutely incredible to see Gomi ride the wave of that turnbuckle once again to celebrate a victory.

Following his first knockout win since 2012, Takanori Gomi improves his legendary record to 36-15. “The Young Assassin” put forth a valiant effort, but is ultimately winless in his last nine bouts as he falls 32-21-2.

In one of the most intriguing fights of the night, Japanese wildman Satoru Kitaoka brings his near-70-fight resume into the ring to welcome TUF 14 winner Diego Brandão to RIZIN.

It was the power of Diego Brandão vs. the unpredictability and ground-savvy attack of Satoru Kitaoka. And it played out as such.

Very early on, a scramble on the ground leads to Kitaoka looking for one of his signature leglocks. And as he fell back looking to mangle the leg of Diego Brandão, he felt the Brazilian’s power.

Diego Brandão smashed the open face of Kitaoka who was focused more on his offense than his defense, and it resulted in him putting the veteran out and getting the shocking finish.

Leg locks are a high-risk move, and Brandão showed the world exactly why. Hell-bent on becoming the second-coming of PRIDE Wanderlei Silva, the heavy-handed Brazilian improves to 23-12, picking up another highlight-reel KO.

The Japanese MMA pioneer Kitaoka falls to 41-17-9, but expect him to rebound in a big way. Per usual.

I will not spend very long on this fight. RIZIN 11 was loaded with great fights & finishes, as mentioned above, there was one stinker on the entire card. This was it.

RIZIN committed a sin and booked an MMA fight with no elbows, grounded knees, or soccer kicks. And this crime is something they paid for in the form of an absolutely atrocious 15-minute contest.

Shibisai landed an illegal knee early and received a yellow card for it. This pissed Boldpurev off, as he closed the round by continuing to fight well past the bell and pushed on the face of the moat fighting star to head back to his corner.

Between rounds, the corner of Boldpurev dumped ice and water all over their fighter and the ring, so this time Boldpurev received a yellow card. Childish antics throughout and Boldpurev celebrates post-fight as if he had just won a Lawler/Macdonald II-esque bout.

Be surprised if either fighter gets brought back to RIZIN after this one. The Japanese fans are known for being the most respectful crowd in combat sports. By far. So when you have them booing you, you know there’s a problem.

It was a battle of young guns up next in RIZIN 11’s sole kickboxing bout.

Kaito is a Shoot Boxing superstar, dubbed by some as the “Prince of Shoot Boxing,” and he took on a far less experienced REBELS veteran Yoshiya Uzatsuyo.

This fight was thrown together on 24h notice, but man did Kaito impress.

He showcased a tremendous legkick-heavy gameplan in round one before scoring the knockout blow in round two with a knee to the jaw. Kaito put on a show and looked fantastic doing it!

In the first female fight of the night, we saw a battle of proud mothers and high-level grapplers.

It was a very fun scramble-fest, with both ladies giving everything they had. As a three-time gold medalist at the World Wrestling Championships, we saw Miyuu Yamamoto employ that gameplan spectacularly – showcasing some stellar submission defense to boot!

It was a good performance from both, as evident from the split decision call. The gutsy showing pushes Yamamoto’s record to 2-3, having fought only top-tier competition along the way. Ishioka falls to 15-12 as the veteran loses a close one in Saitama.

On-paper, this fight was a brawl. Two constant-pressure fighters who are willing to eat a couple to deliver one of their own.

Despite the fight just barely lasting one minute, it delivered. They entered the fight with bad blood, as Yamamoto didn’t want elbows to be legal in the fight – rendering them illegal. Topnoi, the muay thai specialist, did not appreciate this. As a result, he took jabs at Yamamoto and Japanese fighters as a whole.

Topnoi and Tadaaki dropped eachother before the brutal finish.

Yamamoto dropped Topnoi with a left-hook, Topnoi recovered and dropped Tadaaki with a left-hand of his own. Following this up with a soccer-kick before sleeping “Onibozu” in the corner with a clean right hand.

The Thai improves to 6-1 with five knockouts, and the veteran “Onibozu” falls to 15-11.

Opening the show we saw one of my most highly-anticipated fights of the night. A stand-up firefight between the always flashy Daron Cruickshank and heavy-handed Brazilian Tom Santos.

Most fans expected three rounds of violence. And, well, we did get that. But virtually none of that was courtesy of Tom Santos.

“The Detroit Superstar” was firing on all cylinders throughout. Spinning back-fists, jumping switch-kicks, 360-degree soccer kicks, headstomps, rolling thunders to a downed Santos. It was a spectacular showing.

In round three, Cruickshank faked a takedown so Santos would use a heavy sprawl. In doing so, he took down Santos essentially – without even touching him. And as Santos laid on his back, Cruickshank frontflipped onto his downed foe.

A few moments later, the striker took mount and sliced Santos open bad with some disgusting elbows for the stoppage.