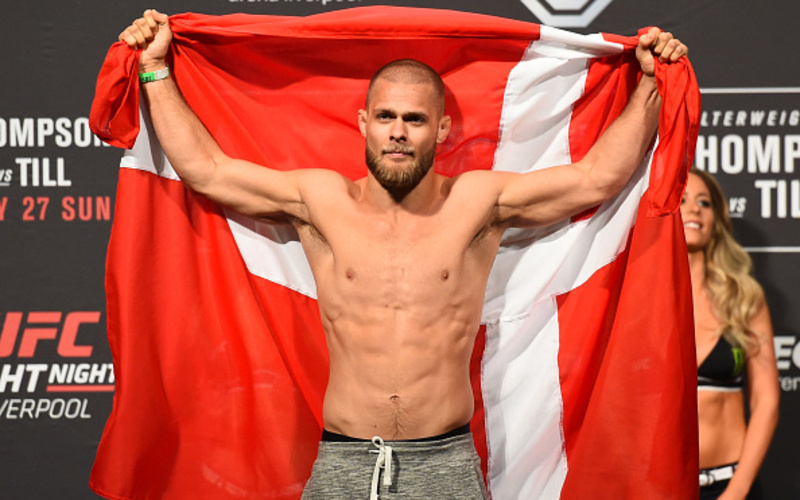 After compiling a 1-2 record in the UFC, Danish featherweight Mads Burnell has signed with Cage Warriors. The news was announced earlier this morning from TV3Sport. This comes as a surprise to many, seeing that the young 24-year-old looked to have a promising career ahead in the world’s top promotion. Many took to Twitter after the news of his release from the UFC and signing with Cage Warriors.

Mads Burnell is a bad cut. Dude was looking great in his last fight. Very disappointed.

This is so bad. Mads was easily one of the best MMA wrestlers in Europe and was a definite prospect in the UFC regardless of his slow start. And he was about to 30-26 Arnold Allen in his own backyard before the flash submission. The UFC have made a mistake with this one. https://t.co/UVRAnssSS2

Makes no sense, this dude was a legitimate UFC level fighter.

Burnell began his professional mixed martial arts career in September of 2013 competing in various European promotions. He would sign with the UFC holding eight victories and one defeat as a short-notice replacement to face Michel Prazeres, losing by submission late in the fight. Burnell would victoriously rebound at the opening card of 2018 with a unanimous decision over Mike Santiago. Burnell’s third and final UFC fight came against Arnold Allen in May, and despite controlling most of the fight, he would suffer another submission defeat in the third round.

Burnell has competed in the featherweight division his entire mixed martial arts career. The 145 pound Cage Warriors belt is currently up for grabs, as former champion Nad Narimani vacated the strap after signing with the UFC. However, if there would be any interest to move up to lightweight, newly crowned champion Soren Bak is fresh off a decision win over Paddy Pimblett. A potential bout between the the two could very well be a fight the promotion wants to make happen next.

With a little more experience under his belt, we may very well see Burnell one day back competing under the UFC banner. For now: welcome to Cage Warriors, Mads.