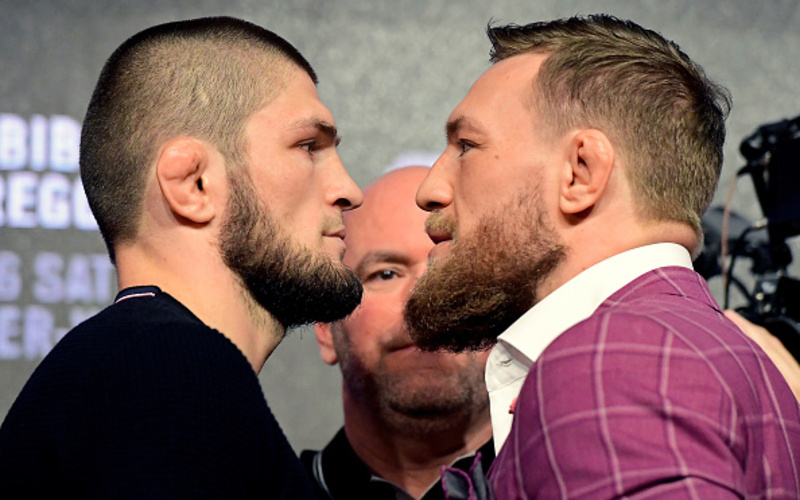 One of the biggest fights in UFC history is upon us. Lightweight champion Khabib Nurmagomedov will defend his title against former featherweight and lightweight champion, Conor McGregor. There’s more than just a belt on the line, however. The two hate each other and will square off in a grudge match. UFC 229 goes down tomorrow night. Who are other professional MMA fighters predicting to win this match-up?

“I think Conor’s going to win and I think the only way Khabib beats him is if he takes a complete ass-beating for three rounds and then comes back miraculously and maybe gets a decision. I don’t think Khabib can finish Conor. I don’t think Khabib can really finish anyone. He kind of has that finishing ability. I just don’t know if Khabib can take those shots the same way [Nate] Diaz did. Diaz is a really accomplished striker and Conor put him down consistently through rounds 1 and 2. The only thing I question in that fight is Conor’s gas tank.”

“I really feel like Khabib will close the distance and wreck him on the ground. If I had to bet money I think I’d put it on Khabib. They’re both top-end guys and they’re really good at what they do. I feel like the wrestler-grappler will win this match-up.”

“Conor better not let Khabib make him touch that mat. Or else that’s it.”

“I think Khabib is way bigger and stronger. If he can get caught by Conor, then we’ll see. But I basically see him steamrolling Conor, to be honest. He’s not going to have the same grappling arsenal as Khabib does. He can’t make no mistake into one of those spinning back kicks because he’ll just get taken down. All he has is his left hand and maybe a right hook. In terms of who is real as a fighter, I think more so that Khabib has that crazy thirst. Conor’s pretty hard too but nothing like Khabib and what he really wants.”

“Oh, as soon as Conor threw that dolly through the window of the bus, I was like ‘Damn I can’t wait to see them fight.’ That’s tough because Khabib has proven himself but I’ve got to go with the strikers man. Wrestlers, Jiu-Jitsu players, I have the utmost respect. But you’ve got to respect a striker. When they touch you and you look at them like, ‘What the hell?,’ you’re relying on your instincts at that point. I’ve got to go with Conor on this one.”

“That’s one of the hardest match-ups to pick ever. They’re two totally different styles. If I had to put money on it, I’d pick Conor. The only reason is I’ve seen a hole in Khabib’s game. Michael Johnson almost knocked him out with that left hand. And if Conor connects it, he could put him away. Conor also gets the range immediately. I’ve never seen anything like it. It usually takes fighters a round or two to get their range. I feel like he’s going to get Khabib’s range. He’s going to really land that left hand or a combination and put him away, as hard as it is to bet against Khabib.”

“Khabib wins by TKO second round. I think Khabib will out-wrestle him every round and smother him with ground and pound.”

“It’ll either be a counter-punch from Conor or a wrestle-fuck show from Khabib. Both of their weaknesses are each others’ strengths. I’m open to seeing Khabib closing the distance and dummying McGregor. I would like to see him get wrestle-fucked.”

“I think Khabib takes him down and mauls him, but every time I count Conor out I’m wrong. So we might all be surprised with a quick KO.”

“It’s literally a 50/50. I think that Conor is going to pick Khabib apart. Khabib gets hit an awful lot because he walks straight forward to grab you and doesn’t move his head. Conor has great footwork. But if Khabib grabs him and gets him on the ground, I think the fight will be over within two minutes.”

“Conor McGregor by way of Proper No. 12. If Khabib gets KO’d on the decal of McGregor’s whiskey on the mat, I called it.”