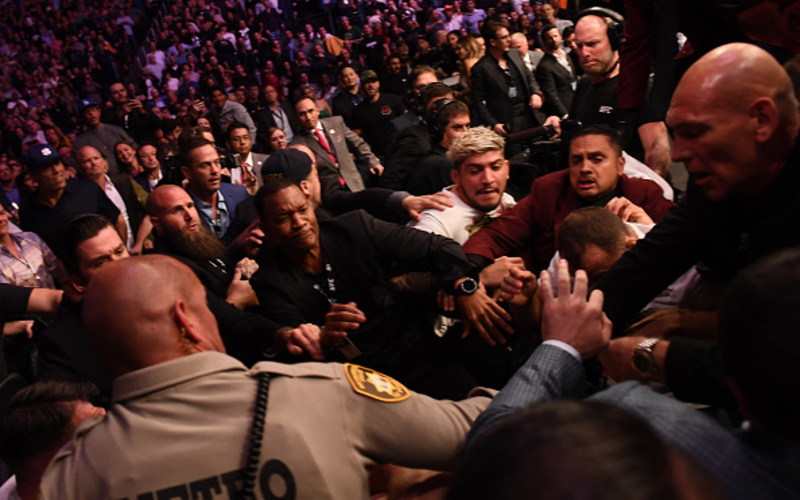 When the main event was over, UFC 229 was a major success. Khabib Nurmagomedov submitted Conor McGregor in the fourth round to retain his lightweight championship. The success soon turned to disaster, as Khabib jumped the cage to confront one of McGregor’s teammates, and absolute madness followed. The UFC 229 aftermath will be talked about for a long time, and here is what happened.

Cahaos in the UFC 229 Aftermath

As soon as the fight ended, when McGregor tapped to Khabib’s rear-naked choke, Khabib was fired up. He appeared to stand over McGregor and yell at him before he was pulled away by Herb Dean. Khabib’s attention was then diverted to McGregor’s teammate Dillon Danis, who was sitting ringside. According to Dana White, Danis got Nurmagomedov fired up by trash talking him from his seat. Khabib, already fed up with all the personal insults that were directed at his father and religion leading up to the fight, jumped out of the cage to confront Danis. Though it is definitely a bad look for Khabib, and White says he will likely face serious punishment from the Nevada State Athletic Commission, Khabib didn’t appear to land any punches on Danis before being pulled away.

By far the worst acts of the night were committed by Khabib Nurmagomedov’s teammates. After all of the brawling ensued, two of his teammates appeared to jump in the cage and attack McGregor. Zubaira Tukhugov was the first teammate into the ring and appeared to hit McGregor a few times. Rising UFC lightweight Islam Makhachev was soon to follow and also appeared to land a few shots on McGregor. White originally said that those two and one more of Khabib’s teammates were arrested. He then stated that McGregor did not want to press any charges on the men, so all three were released. Still, White said both Tukhugov and Makhachev will never fight in the UFC again.

One thing that is getting lost in the shuffle is that McGregor might not be completely innocent. In the below video, you can see Khabib’s teammate and cousin Abubakar Nurmagomedov jump on the cage to try to go after Khabib and stop him. McGregor, after jumping onto the cage, decided to punch Abubakar, who didn’t do anything to instigate. This appeared to be what caused Tukhugov and Makhachev to hop into the ring. Still, it seems that McGregor will not be receiving any punishment for his post-fight actions.

Fighters Not Getting Paid

Dana White’s first report of the night was that the NSAC was withholding both fighters’ checks until an investigation could be done. Soon after, he then reported that after reviewing video, the commission determined that McGregor was innocent and he was paid. White said that, as of his post-fight presser, the Nurmagomedov had not received his money. This would make you think that the commission either didn’t see the angle of McGregor hitting Abubakar Nurmagomedov, or determined it wasn’t anything that would warrant a further investigation.

All of the UFC 229 Aftermath will be talked about for weeks to come. White said that there will likely be severe punishments for Khabib and his team. He has already brought up the issue of whether or not they will be able to get visas to get back into the country again. To be fair, he said the same things after McGregor’s bus incident, of which nothing came. And, McGregor already posted to Twitter saying this:

So, this whole thing seems to be far from over. Whether or not McGregor deserves a rematch is a different story (he doesn’t). But, after all the dust settles, we just might get round two. If that’s the case, the UFC should have more security ready. And, they just learn that using unsanctioned violence in advertisements for the fight isn’t a bright idea.