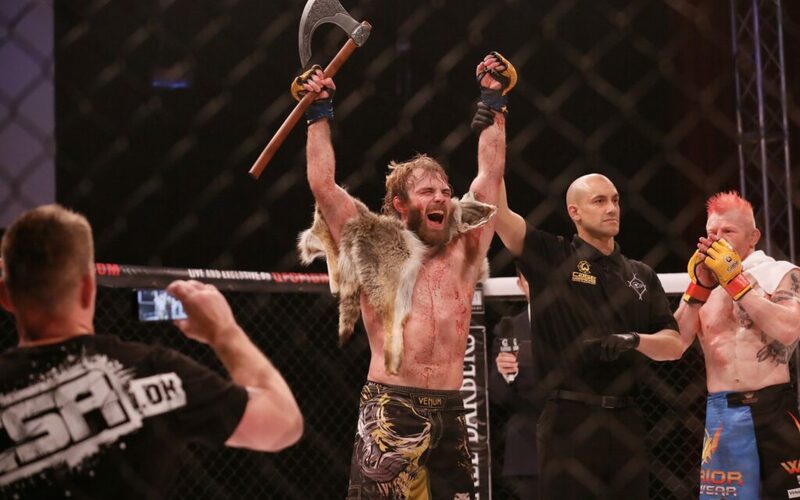 In one of the biggest upsets Cage Warriors has ever seen, Søren Bak captured the lightweight title from the hometown hero, Paddy Pimblett. Everyone seemingly counted “The True Viking” out of the fight. Bak was determined to walk into Liverpool and silence the fans that spoke against him. Silence them, he did.

Søren Bak took a very different route starting in MMA. Like many, he brings in a strong wrestling background. But, Bak is special because he started as a child. “From a very young age, the age of six, I started wrestling. From there, when we started the MMA team after wrestling, my trainer was like, ‘Just stick around.’ Even though it was 18 to get onto the team, and I was 14 or 15, with the wrestling background, I still thew people around.”

As Søren Bak walked to the cage, he swore he would take Liverpool, as his ancestors did way back when. Upon Bak walking out, the crowd was wild, booing and jeering the guy who was taking on the hometown kid. If I Had a Heart by Fever Ray played through the loudspeakers (interestingly, the same song as the History Channel’s Vikings TV series as well).

Just as Bak began his walk, the stadium fell silent, anticipating the fight they dreaded. Bak comes out in his pelt with his battle axe draped over his shoulder. He was ready for war. “It worked for the atmosphere. It fits me well when people just let me hear my music.”

Paddy Pimblett is known for his charisma and crazy submission skills, as seen above. Bak made all the right preparations going into the fight. “It was a little bit of both [special training and business as usual] going into the fight. Paddy is very hard to predict what he’s going to do. Therefore, it’s hard to train for him specifically. We did a lot of things in the camp with ground guys, high level jits guys, and made them try to catch me in a submission if they could.”

In the first round, Pimblett almost had Bak put away with an insanely deep rear naked choke. To everyone’s astonishment, Søren survived it, didn’t pass out and did not tap, giving him the cardio advantage for the rest of the fight.

“There were a few seconds there where I was thinking, ‘Well, this isn’t where I wanted to be.’ So, I scrambled for his hand on my neck and I just couldn’t grab anything. I tried to move to the other side, so I did and I was just trying to get a little bit of air. That was enough for me to work with going into the next couple minutes. He was trying to get it, but it wasn’t really as deep as it was in the beginning.”

After the fight, in his ringside interview, Bak said only one person was allowed to call him while he was on vacation: Dana White. While the phone call from Dana hasn’t come personally, Bak and his crew are speaking with people in the UFC.

Because of the potential a title in Cage Warriors brings, Bak’s future is still up in the air. Arguably next in line for a lightweight title shot in Cage Warriors is Jack Grant, who fought on the same card as Bak.

“When you get a title in Cage Warriors, in your contract, you get a few months to figure out what your next move is. We’re not through that period yet and haven’t looked at Jack Grant specifically. One thing I did notice about Jack is his first real, hard opponents have been his last two. He’s coming on a six-fight win streak, but many of them haven’t positive records. I know a lot of people are calling for Jack, and he will get his shot eventually, but I can’t say if he’ll get his shot right now.”