A quest for glory continues Saturday. After an arduous layoff, Taylor Thompson returns to the cage where she is set to break a 10-month dry spell. She will do so in Maine for the New England Fights promotion at the organization’s 36th numbered event.

In this fight, Thompson makes her promotional debut with NEF. She faces Maine’s Catie Denning.

The layoff frustrated Taylor Thompson. A lack of depth in the New England region already caused her career to slow at moments. Over the summer it was a freak injury which put her life on pause.

“I had a fight lined up in June and I broke my foot, fight week. It was three or four days before the fight. I was doing pad-work, and it was the last minute of the last round of the entire camp. All I had left was cardio, and I misstepped, I heard a snap and I yelped. It takes a lot for me to have that kind of pain response.

I went to the doctor as soon as they could get me in to get an x-ray. They were like, ‘yup, fifth metatarsal is cracked and broken clean through in two places. You are lucky you didn’t need surgery and pins. Hopefully, you’ll be walking in 10 weeks.’ I was like, ‘Run that by me again?’… I ended up not being able to fight in June. And I had another fight lined up in July that I had to withdraw from as well for the same injury. It was a long process but I am feeling good. I barely remember which foot it was.”

Although Thompson is the Cage Titans Bantamweight champion, she migrated north in search of match-ups. In the New England region, women fighters are scarce, making it hard on women like Thompson to cultivate her career, especially as an amateur. Her move north is in no a slight against Cage Titans, yet more-so a statement upon the lack of depth in this area.

“My manager and I reached out to every promotion we had contacts with and said, ‘hey, what opportunities do you have available?’ I did reach out to Cage Titans and asked if they had somebody lined up to challenge me for my belt through there. They didn’t have anybody at the moment…

It’s difficult for all women to find fights in this area, I think. Because there is definitely some good talent but we’re all so spread out that it’s difficult for promotions to justify paying for somebody to travel in for an amateur fight.”

In Catie Denning, Thompson has a game opponent. While her record displays a lack of cage experience having fought only once, she is not to be underestimated. Denning is a tough woman. For Thompson, Denning is another cog in the machine. But she, like most fighters, will enter the cage with humility as she expects the very best from her opponent.

NEF 36 takes place at Aura in Portland, Maine November 17th. The card also features Jose Lugo in his return to action when he takes on Ernesto Ornelas. Also on the card, Ras Hylton and Yorgan de Castro battle for the inaugural NEF cruiserweight title. 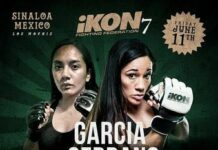