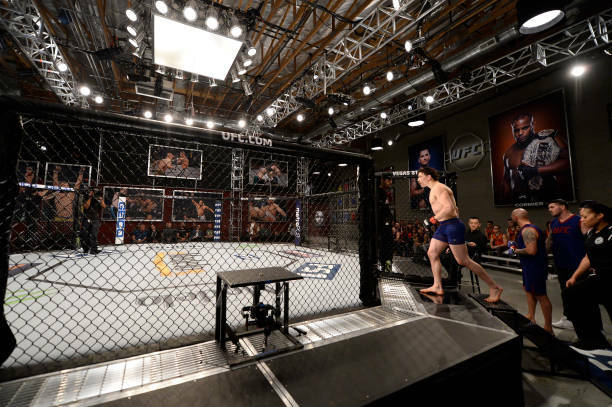 It’s week ten of The Ultimate Fighter Season 28! The semi-finals continue as Pannie Kianzad of Team Gastelum takes on Julija Stoliarenko of Team Whittaker! Will there be any further Maurice Greene incidents? Will the house stay relatively calm? Let’s find out in this week’s TUFtermath!

#1) Trading Vices – Maurice Greene has put down the booze, but has returned to another one of his coping mechanisms in smoking. It has, however, allowed him some clarity, and the strength to finally talk about the pressure that’s been weighing him down.

#2) Regional Rivals – While they’d never fought prior to this week’s episode, Julija Stoliarenko and her team at home have been studying Pannie Kianzad for a long time. This was simply due to the two being based in Europe, and

#3) Refocus – Maurice Greene’s story has overshadowed a lot of what’s going on in the house, and now we’re coming into its third act. Coach Kelvin Gastelum gave him one last lecture before setting him to work with one of the strength and conditioning coaches on a series of drills designed to make get his head back in the game. We’ll see if it works next week.

Stock Up: Pannie Kianzad. It was a gutsy win for Kianzad, who showed tremendous coachability and great takedown defense against Julija Stoliarenko. Win or lose, expect a good showing from Kianzad at the TUF 28 Finale.

Round one of Pannie Kianzad vs. Julija Stoliarenko saw the Team Whittaker fighter start first, throwing jabs and leg kicks in an attempt set up a takedown. She controlled the striking for approximately the first 90 seconds, but soon Kianzad would start firing back. Smart counterpunches and combos on Coach Gastelum’s command helped her close the gap somewhat, but Stoliarenko was still ahead in terms of landed strikes. With less than 90 seconds left in the round, Julija finally made a serious takedown attempt, only to have it fended off by Kianzad. The round would end without any other strikes of note being landed. I scored it 10-9 for Stoliarenko.

The second round saw Pannie Kianzad get more active, not letting Julija Stoliarenko strike first and unanswered. As the exchanges grew more frequent, Kianzad was able to stun Stoliarenko with a lead hook at the end of a combo at the 1:52 mark. This triggered something in Julija, causing her to attempt a very telegraphed takedown that Pannie easily defended. Kianzad’s continued to find her timing and range, catching Stoliarenko and turning her desire ifor a takedown into desperation. Pannie shrugged off multipe takedown attempts as she picked up the pace on Julija as the round drew to a close.  I scored the round 10-9 for Kianzad, putting the score at 19-19 after two stanzas.

Round three saw Pannie Kianzad starting at an even higher pace. Julija Stoliarenko was getting drawn into exchanges that were not necessarily ending well for her. Midway through the round, Stoliarenko attempted a takedown ontly to be brought back up to a vertical base and and hit with shots that made her knees buckle. Kianzad’s strikes were landing often, and landing hard on Stoliarenko. The damage done was visible on both fighters. Kianzad was busted open at some point in the round. Stoliarenko looked like she’d been through a blender. After the horn, I scored it 10-9 for Kianzad, which would have her winning the fight 29-28.

After three rounds, the judges awarded the fight to Pannie Kianzad via unanimous decision. Kianzad will move on to the featherweight finals.

Team Gastelum now has a man and a woman going to the finals. Next week we find out if they can fill both slots in the men’s final. Next week, Maurice Greene will take on Juan Espino of Team Whittaker. Keep it locked to MMASucka.com for the next TUF 28 TUFtermath!