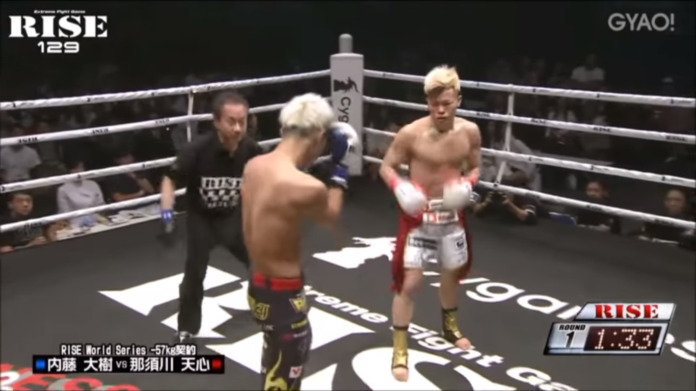 Early this morning, RISE 129 went down in Japan. It was a stellar card, topped by a rematch between Tenshin Nasukawa and Taiki Naito.

Back in 2015, a 16-year-old Tenshin stopped an 18-year-old Naito to win the -55kg BLADE FC JAPAN CUP TOURNAMENT. Both had improved drastically since this date, however. So a lot of people were truly expecting a competitive fight, with Tenshin having an obvious advantage.

It was not a competitive fight, though. Tenshin came out to destroy Naito, and that’s exactly what he did.

About one minute into the round, Tenshin flurried with punches and one of his signature body shots before literally pushing Naito into the ropes. As Naito rebounded back in Tenshin’s direction, the 20-year-old prodigy landed a superman punch to score his first knockdown of the fight.

Taiki Naito was able to get up, of course. But it took just seconds for Tenshin Nasukawa to continue pushing the pace on Naito. With his foe’s back against the topes, Tenshin lit him up with punches and more body strikes before capping off the flurry with a left-hand that put Naito down yet again.

It was another knockdown for Tenshin Nasukawa, but Taiki Naito was able to stand back up once more. It took ten seconds following the stand up for the stoppage to occur. Similarly to knockdown #2, Tenshin had Naito backed against the ropes. As he flurried with a barrage of monster hooks, mixing in him stabbing knees to the gut, Naito had no answer and was very clearly overmatched.

He did not fall a third time, but the referee stopped the contest, seriously saving Taiki Naito from further punishment considering the amount he just took in under two minutes. As Tenshin Nasukawa wins, he improves to 28-0 in kickboxing.

An emotional Tenshin Nasukawa post-fight sincerely thanks Naito for fighting him, and now as he looks ahead to facing Floyd Mayweather at RIZIN 14, he says he puts all of his focus on NYE starting today.