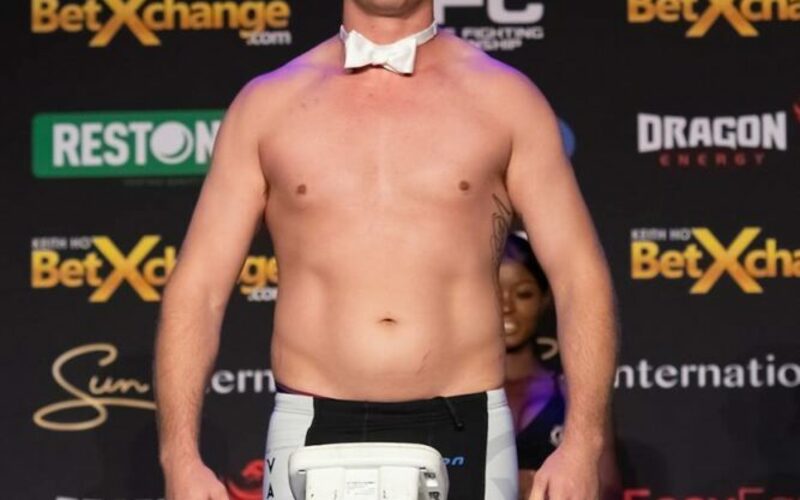 This match will decide who is the best heavyweight within the EFC organization. Vanderaa has been eager to get back into the octagon after his second round knockout victory over
Elvis Moyo back in September. Prior to that, Vanderaa had lost two in a row, both by the judge’s decision.

“I know I belong in the higher echelons, I mean it’s the truth,” Vanderaa told MMASucka. “You know, taking a fight on a week notice and then going in there and putting it all out on the floor and not taking anything away from my opponent [but]he had a ten-week camp but yeah it was a ten-week camp for a different guy so I mean it does change things up. I just took the fight because I wanted a fight you know, I was looking for a fight, people kept on dropping out”.

Vanderaa’s unwanted streak of fighters pulling out lead him into an early state of depression. Due to this, he began to drink prior to being notified of his official fight with Vernon Lewis (6 – 4 MMA).

“I took that fight and I tried to drink as much water as I could to just give my liver a chance for [that] week. Rookie mistake”. Obviously, that fight did not go the way Vanderaa had hoped for, but he is now hoping to change it up with another consecutive victory. This will be Vanderaa’s third fight in 2018, as he follows up on his active 2017 and 2016.

This wasn’t the first time Vanderaa faced adversity in his career. He grew up extremely poor and even as an adult he had to move over 50 times throughout his career. Three years ago, Vanderaa was living in his car, showering at his gym and training full time. Now his life has changed for the better and looks to continue this momentum.

Ruan Potts is a tough opponent for anyone in the heavyweight division. He is currently riding his own 3 fight win-streak within the EFC organization. Potts is also the first opponent Vanderaa will fight who has previous UFC experience.

The two were scheduled to meet in the middle of the year. However, due to a sustained injury in training, Potts had to pull out and Lewis stepped up to take on Vanderaa. “Before I was supposed to fight Vernon, I was scheduled to fight Potts. That was early…March. I didn’t hold my breath on it because I knew he was coming back from knee surgery and I knew it could have been a problem”.

“It irks me when people [say] Potts’ ground game is phenomenal. I mean I respect the guy’s ground game, you know I would be a fool to [say] oh he’s nothing, I can beat him on the ground because I’m a brown belt too, but he’s a brown belt for a reason”. Vanderaa added. “I do respect that”.

Jared Vanderaa is currently training at Dan Henderson’s Athletic Fitness Center. He’s been with the UFC legend for a few years now and looks to capitalize on his teachings.

“I like how Dan [teaches]. He doesn’t show us a lot. He is very quiet. But if he does teach us something it’s because he sees a giant hole in our game. I will rarely shoot, I could do it – I have a great shot but realistically a heavyweight shooting[is unlikely]. You get like phenoms like Cain Velasquez and Curtis Blaydes, you get few of those guys, but even then you don’t see a lot of heavyweight shooting. Having offensive takedowns from different positions is pivotal, and [Dan] always trying to give me one or two just to keep the tides in my favor”.

You can catch Jared Vanderaa fighting this weekend, December 8th at EFC 76 Worldwide.

Stay tuned right here at MMA Sucka for more live streams as well as videos highlighting the top fighters, commentators, coaches, promoters and other names in MMA and combat sports. We also bring you great offers on the latest MMA products and merchandise. Make sure to subscribe to the TCKO YouTube Channel for more MMASucka Powered Interviews!