In the sport of mixed martial arts, the last thing a fighter wants to be known for is being a quitter. To make a career in this sport, you need to be some of the toughest people on this planet.

Fighters have to go through months of agonizing training, hours of brutal sparring sessions and equal amounts of time keeping their body in peak condition. Yes, we may only see certain fighters compete once or twice a year, but make no mistake that there’s no time off. Some fighters are spending 4-6 hours a day in the gym training. When they’re in fight camp, that number can be as high as 8 hours a day. Imagine all the bumps, bruises and cuts they receive just from training.

A fighter’s body is never at 100%. No matter what they tell you, there’s always a lingering injury that is masquerading itself. However, all the pain, sacrifice and hardship is all worth it to these warriors.

The Thrill of Victory

One may think to themselves why would anyone want to be a professional mixed martial artist? Surely being locked in an octagon with another individual who’s one goal is to hurt you must an idea for the mad? Plus, add on everything previously stated about training and it really leaves the casual individual perplexed.

But that’s just it. This sport is not for the casual individual. It is for the unique, the ones who push themselves to unimaginable limits. As for why these combatants fight, it is for the rush of victory. Standing in the center of the octagon, getting your hand raised and hearing the crowd going nuts. It makes all the preparation worth it.

But there’s one factor that looms over MMA as a point that always leads to controversy. In combat sports, a fighter is coached by their corner during and in-between rounds. The idea of the corner is that they are doing everything in their power to make sure their fighter wins and remains healthy. But they’re also the ones that have seen the hardship of their fighter through the training camp and ultimately want to see the fruits of their labor.

With that, however, do MMA corners need to learn when to throw in the towel for their fighter?

The Corner is responsible for their fighter’s well-being 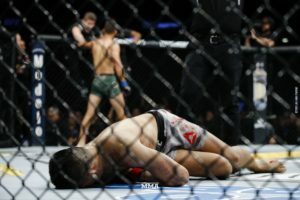 We have seen countless times where two fighters give it their absolute all in a match. Instances where their will to continue overpowers their physical limits. It makes for one hell of a show, but at what cost to the fighter’s health?

When both fighters are toe-to-toe, giving it their all, both landing and winning in exchanges, it makes honorable sense that the corner will not get involved in terms of stopping the match. This example is the fundamental example of what makes mixed martial arts so exciting. Two equally capable warriors leaving it all in the ring. Examples of these types of matches can be seen most recently with Yair Rodriguez (11-2 MMA) versus Chan Sung Jung (14-5 MMA) at UFC Fight Night 139. Both fighters looked like complete equals up until the very last second of the fight. It would have been a devastating blow to the fighter, and to the fans if the corner threw in the towel at any moment during that fight.

But there’s the other side of the story too. The scenario when it’s not both fighters delivering and receiving equal amounts of punishment. In this case, it is a one-sided beatdown where a fighter is receiving unparallel amounts of damage to the head and body.

Not every fight is going to be balanced. There are obvious instances where one fighter is just better than their opponent. Those types of fights typically end in a quick finish or, a grueling beatdown that highlights the clear difference in skills of both.

For the purpose of this article, the first option is the better solution.

It is always easier to judge from the outside looking in. When you see a fighter clearly getting pummeled for the majority of the match, you can think to yourself that the corner should stop the match. Avoiding additional damage should be the priority of the corner, right? 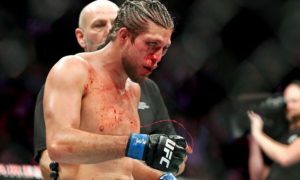 Well, it’s never that simple. Especially in higher level fights where it can lead the victor higher into the rankings, the corner seems to be hesitant. In the month December alone, we have seen two instances of high profile fights that were one-sided beatdowns.

UFC 231 bolstered an impressive fight card with the main event featuring a match between featherweight champion Max Holloway (20-3 MMA) defending his title against Brian Ortega (13-1 MMA). This ended being an onslaught.

Ortega look battered, beaten and at times it was almost too tough to watch. But Ortega showed why his was the number one contender and never gave up. He continued to march forward, hearing the echoes of his coaches to not give up. The fight ended by doctor stoppage between the fourth and fifth round. It took the doctor to intervene and determine that this fight should not continue. Ortega’s corner fought the call and were recorded to be visibly frustrated by the doctor.

Hoping for a miracle is dangerous

It’s clear that Ortega’s corner was hoping for a come-from-behind victory in the fifth. Really?

He was unconscious on his feet. Lost visibility in his left eye, and barely responded to the calls of the referee, doctor, and even his own corner. This was the perfect example of his corner letting him down. If the doctor did not stop the fight, Ortega would have had to endure another 5-minute beatdown at the hands of Holloway.

Another keen example of misjudgment from the corner occurred last weekend at UFC on Fox 31.

Edson Barboza (20-6 MMA) took on Daniel Hooker (17-8 MMA) in the co-main event at the last Fox event. Barboza was subject to a controversy of corners not stopping a fight during his appearance with now UFC lightweight champion Khabib Nurmagomedov (27-0 MMA). He was on the other side this time. For almost 15 minutes Barboza unleashed a striking clinic that was rarely seen before. Utilizing punches, kicks, knees, and elbows – Barboza brutalized Hooker.

It wasn’t just that he was getting the better of the exchanges, he was landing heavy-knockout level strikes to Hooker’s body and head. From spinning back wheel-kicks to heavy overhands and to crushing liver shots, it is remarkable that Daniel Hooker was still standing.

At one point in the fight, Hooker ate a liver shot from Barboza that hunched the New Zealand martial artist. This was when the fight should have been stopped and even then, it would be a topic of controversy. Barboza followed it up with a wicked combo to the liver that finally ended the fight.

Hooker took a beating that is rarely seen. It was completely one-sided and even though it takes one shot to end a fight, hoping for a miracle is dangerous in this sport.

All in all, the coaching staff and the cornermen of any professional mixed martial artist are pivotal. They provide advice, guidance, and support.

It should be their responsibility to see that their fighter is outclassed and taking severe damage that can be avoided. In the heat of the moment, that decision may seem impossible to make. But for the longevity of the career for their fighter, it may be the right move to make. Even if it crushes the current hopes of their team.