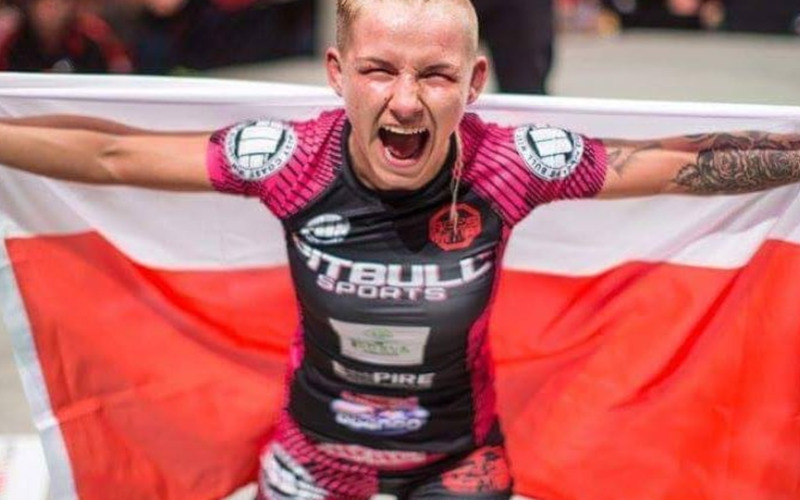 Poland is known for its top-level MMA talent fighting all over the world. The Polish women’s duo of Karolina Kowalkiewicz and Joanna Jedrzejczyk have earned the world’s respect, but there is a third woman who belongs apart of that trio. “The Polish Assassin” Karolina Wojcik is the only of the three to currently hold gold, as she is the EFC Worldwide strawweight champion.

The 24-year-old striker has been through many struggles, to where she is now a champion in life and in the cage.

Some fighters have a great childhood, a great upbringing with solid role-models. Wojcik was unfortunately not one of those. “I did not have an easy life,” Wojcik told MMA Sucka. “I lived with an alcoholic father and freed myself from this. Then I moved to England.”

While in England, Wojcik came across Reps MMA located in Preston, Lancashire, England on December 15, 2015. As soon as she started training here, she knew this would be her new home.

MMA is not just a hobby to Wojcik, it is arguably what saved her from her extremely tough life. “My trainer is my hero. he changed my life. He believed in me like no other,” Wojcik told MMA Sucka. Reps MMA is head coached by Steve Nightingale. Nightingale is a former flyweight who has competed in UK Fighting Championships and ACA (formally ACB.)

Quest to the Gold

Wojcik is just in the beginning of her MMA journey. Her first amateur MMA fight came in May 2016. In 30 plus months of MMA competition, Wojcik has fought in over 14 bouts, only losing two. Fighting across England, Wojcik went 8-1 as an amateur only losing her debut. After that, she reeled off eight victories with four of those by finishes.

In Wojcik’s first year as a professional, 2018, she competed in five bouts going 4-1 and earning the EFC Worldwide strawweight title. Her lone loss came to Cheyanne Vlismas at EFC Worldwide 74 in October 2018. The loss came via split decision with many believing Wojcik actually took the victory. The two had much trash talking back and forth and a rematch would draw huge fan-fair especially with Wojcik now as champion. The American, Vlismas, is 2-1 as a professional but has a lot of experience in the cage earning a 7-5 as an amateur between 2013 and 2017.

The Polish invasion of the UFC is real thing. Several top-ranked fighters represent Poland. Look for Wojcik to continue in the footsteps of females Poles, Kowalkiewicz and Jedrzejczyk, and enter the UFC with hype. With only one year of professional experience behind the 24-year-old, its a very real possibility within the next few years, the UFC strawweight division could have three Poles in the top 15 rankings. Wojcik has all the potential in the world to keep collecting gold belts in whatever organizations she decides to fight in.