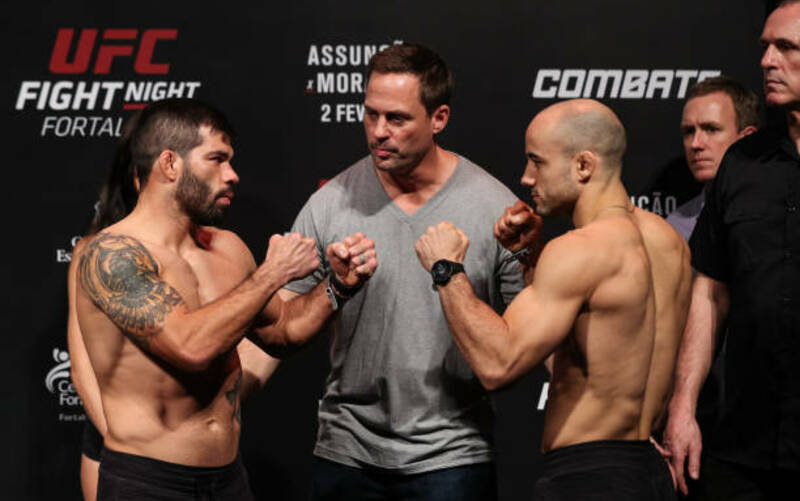 UFC Fight Night 144 is the second broadcast held on the new home of UFC broadcasts, ESPN+. After an exciting debut on the streaming platform, the UFC brings ESPN+ to Fortaleza, Brazil. In the fight-crazed country of Brazil, countrymen face-off in each of the headlining bouts. UFC Fight Night 144 is the second ESPN+ card but the first in which every fight presides on the streaming service. From start to finish, the event stays on ESPN+.

Overall 17 Brazilians compete at UFC Fight Night 144. Other than the headlining bouts, Brazilians cross paths in two bouts. The first takes place on the preliminary portion of the card, Geraldo de Freitas vs. Felipe Colares. Livia Renata Souza vs. Sarah Frota opens the main card as the second Brazil vs. Brazil matchup.

The preliminary card hosts a few interesting bouts. Thiago Alves attempts to snap a two-fight losing streak when he takes on Max Griffin. Alves is UFC veteran of 20+ fights. His debut with the promotion came all the way back in 2005 at UFC Fight Night 2. The veteran Alves beat a handful of top-ranked fighters early in his UFC career. On his resume sits wins over Chris Lytle, Karo Parisyan, Matt Hughes, and Josh Koscheck. These victories came in consecutive order and earned the Brazilian a title shot. Alves fought the then-welterweight champion, George St. Pierre at UFC 100, ultimately losing by unanimous decision.

Also on the preliminary card, undefeated Talia Santos makes her promotional debut when she takes on Mara Romero Borella. Santos tallied up quite a few first-round stoppages en route to her 15-0 record. Eight of her victories came by 1st round stoppage. Of those eight, four came inside two minutes. Her opponent, Borella is a relative newcomer to the octagon. Borella makes her 3rd appearance for the organization at UFC Fight Night 144. She looks to boost her promotional record above .500 with a victory.

The main card of UFC Fight Night 144 holds many intriguing matchups. From top to bottom. Exciting knockout artist, Johnny Walker returns to the Octagon less than three months removed from his promotional debut. In his debut, Walker earned a 1st round KO of Khalil Rountree at UFC Fight Night 140. The knockout was Walkers 8th stoppage victory, his 6th KO/TKO. Walker faces Justin Ledet in the second bout scheduled for the main card.

On the opposite end of stoppages, submission aces Charles Oliveira and Demian Maia also compete on the main card. Oliveira takes on Muay Thai stylist, David Teymur. While Maia goes up against a fellow MMA veteran in Lyman Good.

The headlining bouts of UFC Fight Night 144 feature two important bouts in terms of title contention for two divisions. In the co-main event, all-time great, Jose Aldo takes on rising contender Renato Moicano. After impressively defeating Calvin Kattar and Cub Swanson, Moicano looks to be not too far removed from title contention. A victory over arguably the greatest featherweight in UFC history would bolster his status as top contender.

For Aldo, his ascent back to title contention is a bit trickier. In his previous outing, Aldo stopped the surging Jeremy Stephens with a hellish liver shot that crumpled the hard-hitting contender. Aldo followed up with relentless ground and pound before earning the stoppage. This victory was on the heels of his second consecutive loss to Max Holloway. A win over Moicano would be the second contender to have fallen at the hands of Aldo in as many fights.

Marlon Moraes and Raphael Assuncao meet for the second time in a top contender showdown for the bantamweight division in the night’s main event. A victory for either serves as concrete proof that a title shot is deserved. Moraes, the former WSOF (now PFL) bantamweight champion looks to avenge his only UFC loss en route to earning a title shot. His loss to Assuncao in his UFC debut was his first loss since 2011. Since losing in his debut, Moraes continued to handle top contenders just as he did in the WSOF promotion. In four bouts with the UFC, Moraes is 3-1 with 1st round KO victories over Aljamain Sterling and Jimmie Rivera.

Raphael Assuncao has long been a top contender in the UFCs bantamweight division. Since 2012, Assuncao’s only loss came at the hands of TJ Dillashaw at UFC 200. Over that span, Assuncao accumulated a 10-1 record.

Marlon Moraes def. Raphael Assuncao via Submission (Guillotine) at 3:17 of Round One

Jose Aldo def. Renato Moicano via TKO (Strikes) at 0:44 of Round Two

Demian Maia def. Lyman Good via Submission (Rear Naked Choke) at 2:38 of Round One

Charles Oliveira def. David Teymur via Submission (Anaconda Choke) at 0:55 of Round Two

Johnny Walker def. Justin Ledet via TKO (Strikes) at 0:15 of Round One

Markus Perez def. Anthony Hernandez via Submission (Anaconda Choke) at 1:07 of Round Two

Jair Rozenstruik def. Junior Albini via TKO (Strikes) at 0:54 of Round Two

Said Nurmagomedov def. Ricardo Ramos via TKO (Strikes) at 2:28 of Round One