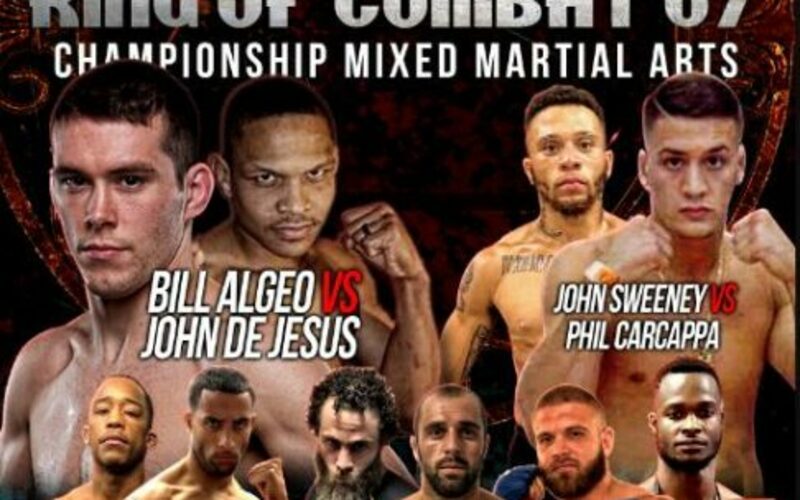 FITE TV is bringing top-level, regional MMA action with the Ring of Combat 67. At the top of the billing is ROC FW champion and promotional staple, Bill Algeo. He’s fighting a game John de Jesus who has fought everywhere from Pinnacle FC to CFFC to LFA.

Follow along with MMASucka as we provide you with the results throughout ROC 67.

Round 1: Some back and forth. Bill Algeo hit’s a wrestler’s headlock! He turns to take side control. He’s landing GnP! He’s heavy on top. Steps for mount but de Jesus gets half guard. Bill is throwing which lets de Jesus get his guard back. Bill STILL throwing heavy GnP. He’s relentless. GnP to the body and the head from inside the guard. de Jesus needs to control his posture. Bill tries to pass which allows de Jesus to explode up. Bill looks for a takedown and locks up a DARCE CHOKE! He’s working it and tries to get mount with it locked in. He’s now selling out for the choke. Somehow de Jesus survives and pops up. Bill ON THE ATTACK. de Jesus is on the retreat. HUGE HEAD KICK LANDS BY BILL. FOLLOW UP STRIKES! DE JESUS IS WOBBLY! BACK ELBOW LANDS BY BILL! MORE STRIKES! SAVED BY THE BELL!!! 10-8 Bill Algeo

Doctor looking at de Jesus between rounds… He lets it continue…

Round 2: Bill lands two body kicks in a row. de Jesus with a right. Bill with a head kick. Bill has his hands down and feels in control and he is. Huge body kick for Bill. Lots of torque. Flurry by Bill Algeo. de Jesus is on his bike! Bill on the attack again and they clinch against the cage. de Jesus is just trying to breathe. de Jesus turns Bill around. Bill lands ANOTHER wrestle’s headlock! He tries for a armbar with his legs in kesa gatame! WOW! This guy is versatile. He then turns into side control and is landing GnP. Knee on belly. de Jesus turtles. Bill lands a big knee to the body. Bill takes his back and rolls him over. Bill sinks the RNC and this looks to be over. de Jesus finally gives in. DOMINANT VICTORY BY BILL ALGEO.

Round 1: Sweeney feinting. Phil throws a couple kicks that don’t land. Guys gauging distance. Phil weaves in and out. Moving forward. Body kick for Phil. Body kick for Phil again harder this time. Sweeney darts in and lands. Phil charges forward and lands a 1-2. Phil throws a head kick but its blocked. Phil lands a right hand. Sweeney is moving well but isn’t landing quite as much. Sweeney lands a HUGE right hand that drops Phil FLAT!!! Sweeney charges forward. Sweeney trying to seal the deal! Phil tries to recover and turns to put up his guard. Phil miraculously recovers and they stand. Phil got hit HARD guys. I thought he was out. Sweeney shoots for a takedown and gets it. Phil stands and Sweeney misses a BOMB. Phil whiffs on two bombs of his own. This is a fight. Sweeney lands a 1-2. Phil lands a counter. Phil slips but gets right back up. Phil seems to have recovered. Pace finally slows a bit. Phil misses a spinning back kick. Sweeney lands a counter. Sweeney lands a follow-up and the bell sounds. That’s a “statement” first round for Sweeney 10-9.

Round 2: Sweeney catches a leg kick and they trade for a second. Gauging distance. Phil seems a bit puzzled by Sweeney who looks more comfortable. Sweeney misses a lead uppercut. They exchange and Phil lands a big right hand. Both land but Phil got the better of that one. Pace slowed. Phil lands a spinning back kick. Leg kick for Sweeney. 1-2 for Sweeney and Phil misses on the counter. HUGE straight for Sweeney basically drops Phil falling forward. Phil drops immediately for a takedown and gets it. Sweeney sitting against the cage and Phil is trying to pull him off the cage. It’s a grind here. Sweeney sucking wind. Sweeney stands and misses. Phil lands a right. Phil looking loose here. Sweeney still is handling Phil on the feet. Left hand for Sweeney. Phil shoots a double. Good shot but too far away and no setup. He does get Sweeney to the fence though. Phil switches to a single. Sweeney making him work. Throwing elbows to Phil’s head. Phil can’t secure a takedown. 10-9 Sweeney

Round 3: I guess this is the final round??? Sweeney controlling the center of the cage. Sweeney bobbing and weaving not cruising to a win. Sweeney paws with his left then throws a huge straight right but overextends himself. Phil avoids the punch and counters with a left-hook/right counter that partially lands. Phil uses his counter to seize momentum pressuring Sweeney back (who was already off-balance).  Phil throws a head kick as Sweeney winds up for a huge looping right hook BUT PHIL’S HEAD KICK LANDS FLUSH. SWEENEY DROPS! KO! Phil covers for GnP and the ref saves him! HUGE comeback victory by the champ!

Round 1: Quick takedown by Giorgi. Step over into mount. Throwing bombs!. Salas stands. Giorgi gets a HUGE takedown and he’s throwing GnP again. SUPER FAST pace to start. Salas on top now – has the back – against the cage. Giorgi stands up. Salas falls off the top and Giorgi on top. They stand up. Fighting for position against the cage. Over-under battle. Legit don’t know how to score that. Maybe 10-9 Giorgi???? 10-9 Salas makes sense, too. He probably had more top control.

Round 2: Trading punches early. Looping right hand punch by Salas. Giorgi lands a big takedown. Salas looks for a guillotine but Giorgi is in side control on the correct side. Salas stands. Salas gets a trip takedown. Giorgi trying to stand and Salas working toward the back. Up against the cage. Salas has one hook in. Giorgi is on a knee. Now Salas looks to go over the top selling out for the second hook. Giorgi stands. Salas may fall over the top. He falls off. Giorgi now taking over. Throwing strikes. They are both standing now. Salas walks Giorgi to the cage. HUGE right elbow landed by Giorgi to end the round. 10-9 Giorgi but close again

Round 3: Giorgi looks like the fresher guy in Round 3. Throwing but nothing to big is landing. Leg kick by Giorgi. Salas needs to throw back. Jab by Salas. Giorgi after throwing a kick. Stands up. Leg kick by Giorgi. Over-under clinch. Big knee by Giorgi. After a slower pace Giorgi lands a HUGE spinning back fist. He’s been looking for that a lot. Giorgi has Salas up against the cage. Ref stops the fight to get dangling tape off of Salas’ glove. Return to the same position. Salas gets a nice double but Giorgi stands up and spins Salas to the cage. More working for position until the bell sounds. 10-9 Giorgi clearer this time.

Round 1: A lot of gauging distance to start. Puglia shoots in but works his way up and they are SLINGING BOMBS. They separate. Puglia changes level but nothing is there. On the feet again. Body kick for Powell. Puglia charges forward and lands two big punches but Powell lands a huge counter! Both guys are bringing it, but nobody going down yet. Flurry by Powell. Flurry by Puglia! Powell drops down! He more dropped by his legs giving out than dropped by any one punch, but he was getting hit by a lot of punches! 10-9 Puglia

Round 2: Feints on both sides. Gauging distance. Flurry by Powell! Puglia is against the fence! Powell throwing bombs! Huge takedown by Powell. Puglia is working his way back up to his feet. Powell looking to bring him right back to the canvas. He clasps his hands together and takes Puglia back down. Pace has slowed quite a bit. Powell lands some GnP and Puglia responds by finding the strength to stand. Powell putting all of hit weight on Puglia up against the fence. Powell throwing some bombs as the bell sounds. 10-9 Powell

Round 3: Head kick by Powell is blocked. Gauging distance, both guys. Powell holding the center of the cage. Leg kicks by Powell. Powell throwing bombs!!! Puglia shoots for a hard double but Powell sprawls throws bombs! Puglia clutching the Powell’s leg and the ref steps in…? Premature stoppage. Not good. Puglia does some push-ups and the crowd boos!