Khama Worthy: “You Have to Be Willing to Die in There” 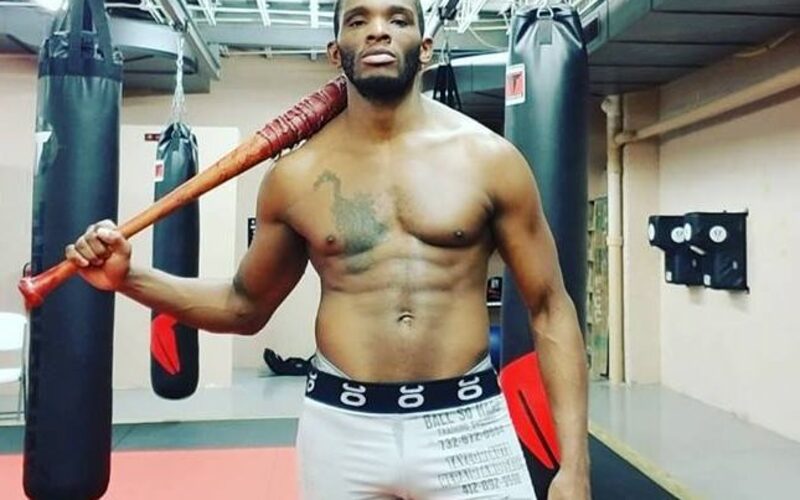 In every sense of the word, Khama Worthy is a star in the Pittsburgh MMA scene. He will be looking to once again impress a hometown crowd at 247 Fighting Championships‘s upcoming event Steeltown Throwdown. “Deathstar” will be taking on Joey Munoz for the promotion’s lightweight championship. Worthy gave MMASucka a few minutes of his time and talked about a host of topics, including the mindset a fighter has to have, his expectations for 247 FC, and his opinion on some UFC fighters.

Throughout our conversation, Khama Worthy talked a lot about the mentality he thinks a successful fighter needs to have. In his 11 year MMA career, Worthy has realized the importance about being in this sport for the love of fighting more than anything else.

“You’re not gonna have any time. It’s a stress on your relationships. It’s very difficult to continue it. And on top of all of that, you’re beating the s–t out of your body on a daily basis”

Worthy also showed a very important characteristic he possesses: confidence. He is confident in himself and his abilities. As the top ranked lightweight, and one of the best pound-for-pound fighters in Pennsylvania, Khama Worthy doesn’t make a big deal about fighting for 247 FC’s inaugural lightweight title.

“I’ve been the f—ing best, I’ve been a king without his crown. For me its just another day in the books. I just haven’t gotten the credit for all the hard work I’ve put in throughout my career. Technically, this s—t’s overdue,” Worthy said when asked if his ranking and status is a humbling experience.

The final tidbit that Worthy shared regarding a fighter’s mentality is the lengths a fighter has to be willing to go to secure a victory.

Khama Worthy has shared the cage with plenty of big names that have went on to fight in the UFC. Those names include Paul Felder, Matt Bessette, and Kyle Nelson. Right away, Worthy shut down the idea that it was a big deal to share the cage with these fighters.

“They’re just regular f—ing people. They’re not superheroes, they don’t have super powers. They’re just regular people. It’s just about performing when you show up. It just means that I’m willing to fight people, but it doesn’t give me a certain advantage. I don’t see a guy in the UFC or a big organization as better. They just had the right opportunity at the right time.”

Worthy went on to once again show his confidence in himself as a fighter, with regards to his thoughts on some UFC fighters. “I see guys in there doing the s–t that I’m doing. They’re just on a bigger stage. It doesn’t mean that they’re better than me in any shape or form. There’s certain guys that do some s–t that I think is impressive. But for the most part, I think I’d walk through like 60-70% of the lightweights in the UFC. I think they’re basic.”

Despite not “looking up” to UFC fighters, there are some who Worthy really likes to watch and learn from.

“I like Israel Adesanya, but he’s just doing the same s–t I’m doing. I tell people all the time, he’s just doing my s–t but he’s doing it on a bigger stage. Edson Barboza is one of my favorite fighters. Of course, Anderson Silva. Who doesn’t love Jon Jones when it comes to martial arts? I like those guys as fighters. I like their styles.” He emphasized again later in the conversation that Adesanya is “stealing his s–t.”

Owning and Operating a Gym

“You just have to make sure you’re just in the gym all day. I’m in the gym at least ten hours a day. If I wanted to do other stuff, it would be difficult. But I can teach classes and get training in between and stretch and jump around,” Worthy said. He does almost all of his training at his own gym. Worthy said he does go to The Mat Factory once a week to get some high level wrestling practice in.

247 FC owner and promoter Ryan Middleton is a friend of Khama Worthy’s. Worthy said that Middleton brings his kids to academy, and the two have gotten to know each other pretty well. Being from Pittsburgh, Worthy likes what Middleton is doing for the sport in that area.

“I think Ryan has a good idea of how he wants to run the promotion, just making it a good promotion. We have a lot of good fighters here in Pittsburgh, and its good to give them somewhere to start off with. And I think he’s doing a really good job with that,” Worthy said of Middleton and the promotion.