The former UFC and WEC featherweight champion Jose Aldo was hospitalized Wednesday due to a severe bacterial infection. The 32-year-old fighter seemed to have had a small cut on his knee where the infection started. Antibiotic treatment was unsuccessful within the first 24 hours according to a report by Combate.

Aldo is on a two-fight win streak. With wins against very formidable opponents, Jeremy Stephans, and Renato Moicano. Both victories coming via TKO.

2019 started very strong for Aldo and is looking to continue the winning streak with his next opponent Alexander Volkanovski.

Aldo vs. Volkanivski In Jeopardy

Scheduled for UFC 237, Aldo’s injury possibly puts this matchup in jeopardy. Doctors are still unsure as to when Aldo will be released. His trainers are hoping for a speedy recovery. The last report showed that Aldo no longer has a fever and is recovering quickly. Everyone is hoping that this will not affect his preparation for his fight in May.

Aldo to retire after the fight in Sao Paulo 2019

According to a number of sources, José Aldo is looking to retire this year. He has had an impressive career and is considered by some to be the best featherweight of all time.

Although due to these recent events, it is hard to tell if Aldo will retire this year. Especially if his fight against Volkanovski is canceled. Its possible fight fans see Aldo again. Only time will tell how this will play out.

Could go for the title again

Aldo, as we all know, is a ferocious competitor. He is ranked #1 in the featherweight division. The way this is all shaping up with the current UFC Featherweight Champ Max Holloway making a run for the lightweight belt. The featherweight title may be vacated. This opens the possibility of Aldo fighting for the featherweight strap once more before retiring.

What do you think could play out? What do you want to play out in the featherweight division? 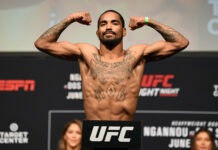