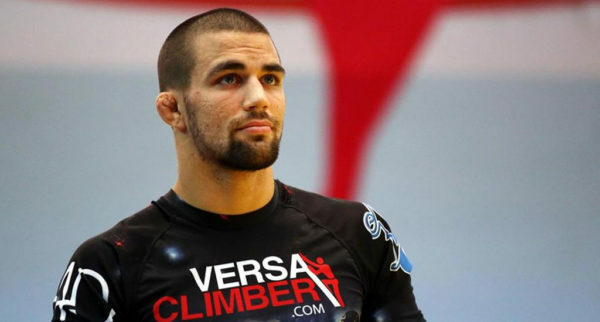 In the original days of the UFC, it was setup to determine which was the superior of the arts. A wrestler would face a brawler, a BJJ guy would face a boxer, etc. Times have changed and it’s more common place in MMA to see fighters well versed in all the artforms. Tonon is leading the charge of BJJ specialist transitioning to the world of MMA. “I believe my success as well as the success of others coming from a grappling background in MMA will inspire others to believe they can do the same,” Tonon told MMA Sucka. “However, I do believe that many will struggle at some point because there is a lot more to this game than rushing in taking people down and submitting them.”

Arguably the most famous BJJ squad aside from the Gracie name is the Danaher Death Squad. The group is led by Renzo Gracie blackbelt, John Danaher. The legendary team houses many of the best young talents in the BJJ world. The team still continues to aid Tonon in his growth, even on his MMA path. “The [Danaher Death Squad] was and still is instrumental to my success in MMA. Before I even got started on my MMA journey, John and the squad gave me the tools to potentially take out any MMA fighter in the world out by submission, which I have proven a number of times in grappling,” Tonon said to MMA Sucka. “I still grapple just as much as I ever did. The only thing I changed in my training was adding sparring and drilling sessions for MMA.”

As far as Danaher specifically is concerned, “I truly do not believe I would have been able to make progress I have in such a short period of time in MMA without his assistance. He gives me a sense of direction at all times which allows every day to be a day towards progress.” Tonon continued, “I don’t even know if I’m half the fighter I will be one day, but I think very few people have made progress like I have in three MMA fights and John is the secret sauce responsible for that. I am extremely excited to be the first MMA student John Danaher had got to work with full time and also have to give credit to my new MMA sparring partners which bend over backwards in their schedules to help beat me up and test myself everyday.”

Being a Part of ONE Championship

ONE championship is arguably the hottest organization in MMA at the moment with their recent signings including Demetrious “Mighty Mouse” Johnson and Eddie Alvarez. “Chatri [Sityodtong] is always talking about how his organization is doing well, and is growing, but I just figured he was optimistic and enthusiastic about his business. It turns out that not only does Chatri and ONE Championship talk the talk about growth. They walk the walk,” Tonon said. “I think this recent group of signings is proof of that, and I’m excited to continue to see them grow in the future and I don’t see this organization slowing down anytime soon. I couldn’t be prouder to be apart of it.”

ONE Championship is set for it’s biggest card to date. It will feature four title fights as well as the organizational debuts of Johnson and Alvarez. Already with a mass Asian following, the juggernaut will look to infiltrate the American fanbase with this card in particular. But can ONE Championship ever overtake the UFC in the grand scheme of worldwide popularity?

“While I still believe that many people considers the UFC to be the gold standard for MMA championships, I believe everyday ONE Championship grows and succeeds it is respected more and more. I will also say that the UFC may be huge in the US, but I don’t think they come close to the popularity of ONE Championship in the Asian marketplace, so regionaly ONE Championship is already more respected than the UFC.”

The Next Task at Hand

After an amazing “rookie” season last year in ONE Championship, Tonon earned a record of 3-0 with three submissions. He takes another step up in competition battling the long time ONE Championship veteran,  Anthony Engelen. Engelen has the knockout power to end the fight quickly if Tonon makes a mistake. On the other hand, three of his five career losses have came by submission which an obvious advantage for Tonon.

So Who is Garry Tonon’s Dream Matchup From Any Era of MMA?

Many fans fantasize about matchups we would love to see if it weren’t for father time. Matchups like prime Anderson Silva vs. prime Jon Jones or a prime Royce Gracie vs. a prime Demian Maia. “Having only three fights of experience I’m not trying to call out the best in the world just yet. In a hypothetical situation I’d like to test myself at my peak against the greatest of all time, Georges St-Pierre because I consider him to be the best that’s ever done it. In the real world I would never fight Georges [St-Pierre] even at my peak because we are teammates.”