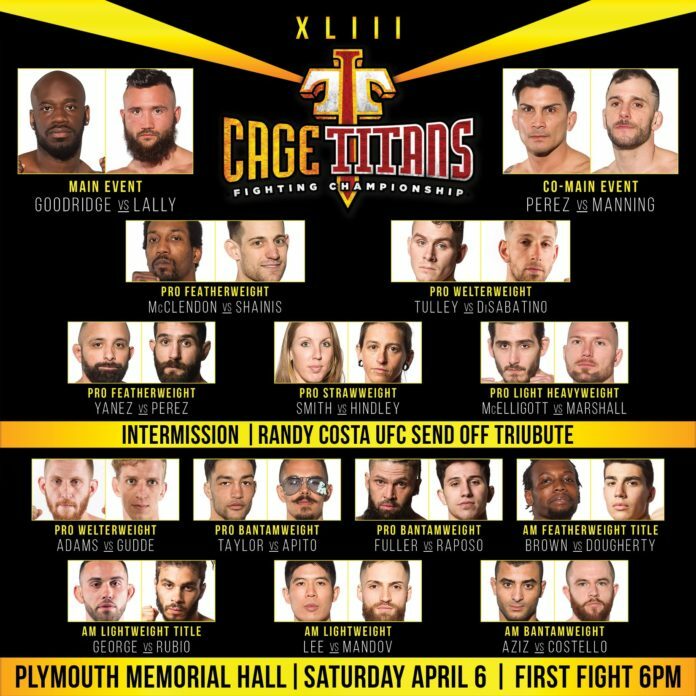 Cage Titans 43 goes down live from the historic Plymouth Memorial Hall located in the historic town of Plymouth, Massachusetts. The forty-third numbered event hosts a record number of professionals. 10 mixed martial arts pros make the walk tonight from across the region and country.

To begin the action, a former two-time amateur champion, Jacobo Apito, makes his debut in the professional ranks. Apito takes on Michael Taylor in the nights first bout. Originally, the clash between the young fighters was set for tail end of the preliminary card. Due to a family emergency, the highly anticipated bout moved to the very opening of the event. Further down the card, the amateur titles are decided.

Two amateur championship throwdowns close out the amateur action on Cage Titans 43. With only four amateur bouts set for the card, the two amateur title fights are sure to bring the action. Top contenders from both the lightweight and featherweight divisions clash. Eddy George and Dion Rubio battle for lightweight gold while Shane Dougherty and Jordan Brown do so for the featherweight strap.

On the main card, a list of seasoned competitors return for redemption. Danielle Hindley, Ron Marshall, Jeff Perez, Albert Tulley, Jimmy Manning, and Zach DiSabatino all look to get back into the win column after suffering the first losses of their pro careers. Just before the headlining bouts, former Cage Titans amateur champion, Don Shainis returns almost 1 year removed from a serious neck injury to take on David McClendon.

In the co-main event, local favorite, Jimmy ‘The Tooth’ Manning and Fernando Perez do battle for the second time. The rematch between the two came after an exhilarating first matchup in which Manning earned the TKO victory after Perez failed to answer the bell for round 2. The main event of the evening gives the fans another return of a Cage Titans veteran. Sean Lally makes his return to Plymouth after fights on Dana White’s Tuesday Night Contender Series and Bellator.

Sean Lally vs. Shedrick Goodridge def. Sean Lally via TKO (doctor stoppage) at 2:52 of round 1

Jimmy Manning def. Fernando Perez via submission (rear naked choke) at 1:25 of round 1

Danielle Hindley def. Brianna Smith via submission (shoulder lock) at 0:37 of round 1

Jesse McElligott def. Ron Marshall via submission (arm triangle choke) at 4:37 of round 2

John Adams def. Trevor Gudde via submission (armless triangle) at 0:55 of round 1

Mitch Raposo def. Rob Fuller via submission (head and arm) at 1:37 of round 1

Shane Dougherty def. Jordan Brown via TKO (Ground and Pound) at 2:22 of round 1

Ebrahim Aziz def. Sean Costello via TKO (Punches) at 1:00 of round 3