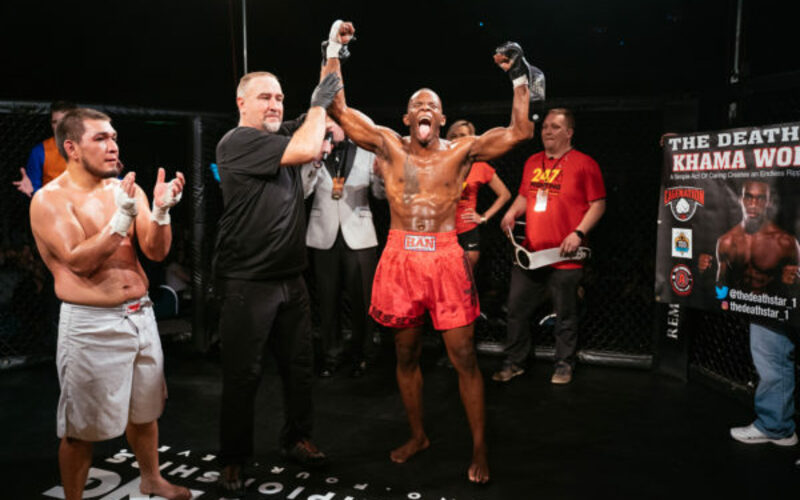 247 Fighting Championships‘ debut event is in the books, and it was quite the success. Steeltown Throwdown was a card filled with entertaining fights and promising talent. The Canonsburg, Pennsylvania crowd was invested in the action from the first amateur fight to the final bell of the main event. 247’s success was a huge win for many fighters on the card, and for Pittsburgh MMA moving forward.

Khama Worthy is a superhero in the western Pennsylvania MMA scene. The crowd’s reaction to him was about as loud as it could have possibly been. Fans who have been following the region for years love Worthy. Kids love Worthy. Everyone in the building was pulling for Worthy, and he did not disappoint. He won the promotion’s lightweight title in what could be his last fight on the regional scene. After the fight, Worthy mentioned the UFC, Bellator MMA, and ONE Championship, saying it’s time to feed his family. Needless to say, it has been a long time coming for Worthy to find himself on the big stage. 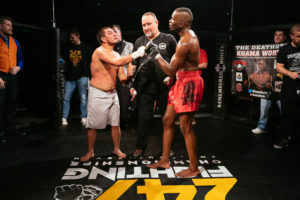 On the other hand, Joey Munoz cannot be given enough credit for his performance. He came into the fight following a bad weight cut, but never made excuses and fought his heart out until the final bell. Munoz was at a major reach disadvantage, but he showed toughness that deserves all the recognition in the world.

Worthy landed numerous straights and kicks to the body, and Munoz walked through them. Munoz absorbed a clean head kick that would have put away 99% of fighters in the world. Despite the loss, Munoz was very pleased with his experience in Pittsburgh. Afterwards, he had nothing but good things to say about the city and the promotion, and would like to come back to the Steel City in the future.

Any promoter would be happy to have a fighter like Joey Munoz, tough as nails and willing to take a fight anywhere at any time.

Ethan Goss put on a tremendous performance at Steeltown Throwdown. The Altoona fighter followed up a spectacular knockout in his last fight with another great finish. Goss took on a tough opponent in Michigan Top Team’s Elijah Cavender. The crowd was wowed by Goss’s kicking game, his counter striking abilities really stood out as well.

He handled his opponent’s pressure well, showed patience, and slowly picked Cavender apart. In the second round, the two ended up on the mat. Goss landed a devastating knee to Cavender’s body, who curled up and presented Goss with an easy opportunity to take his back and sink in the choke. The crowd loved him, and Ethan Goss has to be happy with his performance. 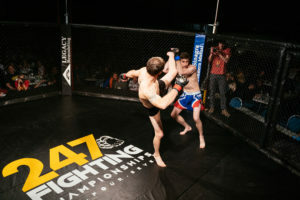 Dustin “BamBam” Parrish made the trip from Indiana for his fight at Steeltown Throwdown. Representing American Top Team, Parrish took on the returning fan favorite Brett “Showtime” Shoenfelt. Parrish gave Shoenfelt a tough welcome back to the fight game.

BamBam got the fight to the mat with a nice level change early in the first round. “Get up, Showtime!” was a common plead from the fans. But Shoenfelt had nowhere to go. Parrish smothered him, held a body triangle, and landed huge shots on Shoenfelt, who wasn’t effectively defending himself.

After the fight was stopped, Parrish took to the mic and expressed his pleasure with the experience and the promotion. He said there are plenty of guys at his gym who would love to come back for the next card. After Parrish’s performance, 247 will likely welcome anyone from his gym with open arms. 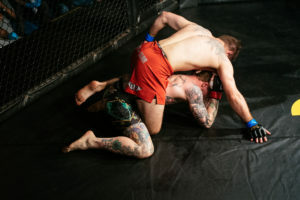 The 190-pound catchweight fight between Jake Braunscheidel of WNY MMA and Tre Blackmon of Stout Training was expected to be one of the best fights of the night. It did not disappoint.

In the first round, the hometown favorite Blackmon looked spectacular on the feet. He was landing huge shots on Braunscheidel, while also defending multiple takedown attempts. However, in the second round, Braunscheidel got the fight to the ground with a phenomenal hip toss.

From there, he wound up submitting Blackmon. These two young fighters both have very bright futures ahead of themselves. Braunscheidel showed off his top level grappling in the fight, and will continue to improve his standup. Blackmon was an absolute force in the first round, and will be a monster with improved cardio and pacing. 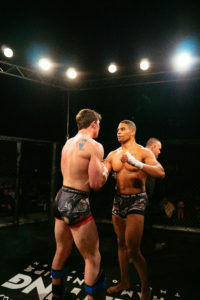 Jake Braunscheidel came out victorious in his war against Tre Blackmon. (Photo courtesy of Damon Burke)

This light heavyweight contest was nonstop action for the one-and-a-half rounds that it lasted. In the first round, Jamie Hare was all over Adam Oatman. Hare was landing huge shots on Oatman, who might not have made it out of the round if it lasted a few more seconds.

But, in the second round, Hare took a risky shot that backfired tremendously. Oatman defended the takedown and ended up on top of Hare, landing shots to the body. The two made their way back to their feet, where Oatman landed a devastating overhand right. Hare was stunned, and Oatman capitalized, sinking in the choke and getting his hand raised. Hare showed tremendous power in the first round, while Oatman showed incredible toughness with his back against the wall. Both of these fighters have plenty of skills to build on moving forward. 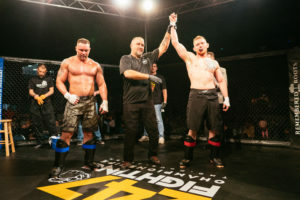 Adam Oatman got his hand raised in his debut fight with Jamie Hare. (Photo courtesy of Damon Burke)

Pittsburgh fan favorite Alan Liu made his debut against WNY MMA’s Derrick Patteson. Despite waking up with a fever of 103 on the morning of the fight, Liu came to put on a show.

He showed flashes of his spectacular wrestling and athleticism. It will be a joy to watch “The Chinese Disappointment” when he is fully healthy.

As for his opponent, Patterson showed abilities to build on in the fight. In round two, Patterson worked well and stayed busy off of his back, winning the round on the judges’ score cards. He also showed potential in the striking game, mostly due to his length for a 150 pound fighter.

But, Liu was definitely the star of this fight. The crowd loved his performance and his post-fight interview. Liu has the athleticism, diverse fighting skills, and charisma to build on the momentum from winning his debut fight. 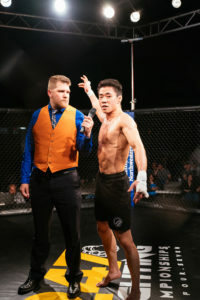 Alan Liu entertained the crowd with his performance in the cage and on the mic. (Photo courtesy of Damon Burke)

WNY MMA’s Pat Carrasquillo set the tone right away against hometown opponent Rob Licht. Carrasquillo, who originally wasn’t much of a wrestler, came out and slammed Licht in the first minute of the first round.

In the second round, Carrasquillo attempted a spinning back fist. The shot connected, and blood shot from Licht’s nose halfway across the cage. It was an extremely nasty cut, and it seemed like the fight might have been stopped.

Eventually, Licht got cleaned up and continued the fight, showing tremendous toughness. Licht has a great coach in Pittsburgh MMA legend Mark Shrader, and the 20-year old will definitely be back. Carrasquillo will look to build off of his first career win with his quality striking and newly-improved wrestling abilities. 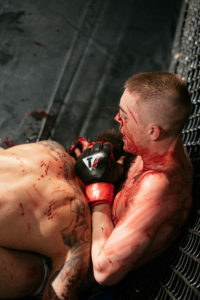 Pat Carrasquillo works on a takedown against the cage, while Rob Licht’s nose bleeds all over the canvas. (Photo courtesy of Damon Burke)

The biggest takeaway from Steeltown Throwdown is that 247 Fighting Championships is here to stay in the world of MMA. Their first ever show was a tremendous success. In an area where wrestling is such a beloved sport, it’s no surprise how passionate the Canonsburg crowd was toward the fights.

There wasn’t a bad fight on the card, and there wasn’t a fan that left the arena disappointed. 247 promoter Ryan Middleton and matchmaker Liam Morris put themselves on the map with Steeltown Throwdown, and they aren’t going anywhere.

During the event, it was announced that Steeltown Throwdown II will take place on July 27, 2019, again at Printscape Arena. MMASucka will be covering the action in the weeks leading up to the event and the event itself. Now that 247 is established as a legit promotion, the sky is the limit for Middleton and Morris.