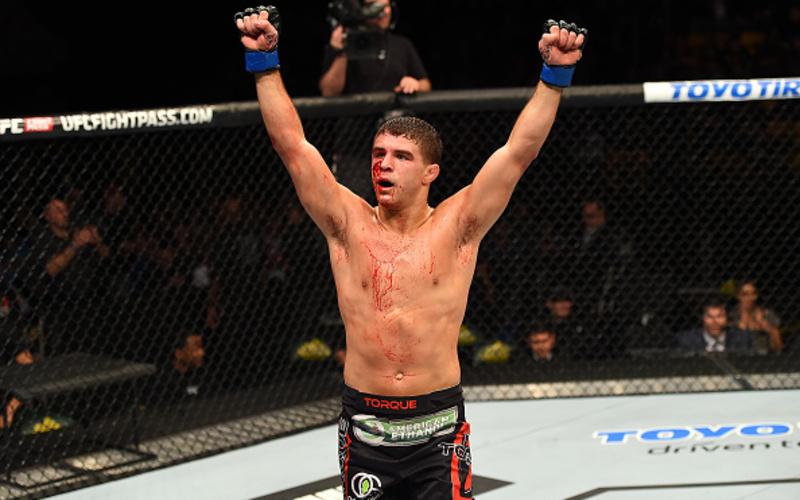 UFC on ESPN+ 9: Iaquinta vs. Cowboy comes to MMA fans on Saturday, May 4. The main event will see No. 4 lightweight contender Al Iaquinta look to maintain his spot in the rankings against No. 8-ranked Donald Cerrone, who had a triumphant return to the 155-lb. division in his last outing vs. Alex Hernandez.

While the main event stands out, one glance at the 2019 MMA betting odds reveals that the entire main card is slated to be tightly contested. The biggest favorite on the main card is a slight one, at -175. If one is feeling particularly good about any of the six bouts, now could be a good time to pounce. Let’s take a look at the UFC Ottawa main card, which goes down from the Canadian Tire Centre.

“Raging Al” enters the match-up having won six of his last seven. The Long Islander picked up the biggest win of his career his last outing in a rematch against Kevin Lee, whom he improved to 2-0 against. The only loss? To lightweight champion Khabib Nurmagomedov, who is expected to defend his title against interim lightweight champion Dustin Poirier in September.

Cerrone returned to lightweight following an up-and-down welterweight stint with a bang when he TKO’d up-and-comer Alex Hernandez. With wins over him and Mike Perry, Cerrone rides a two-fight winning streak.

Expect to see the boxing of Iaquinta against Cerrone’s Muay Thai in the stand-up. On the ground, it will be Cerrone’s opportunistic submission game against Iaquinta’s defense-oriented grappling.

Brunson will look to snap a two-fight losing streak against hometown favourite Theodorou in the co-main event (or, co-mane, if Theodorou has any say). Theodorou enters as the slightest of favorites, perhaps propelled by his three-fight winning streak over the likes of Eryk Anders, Trevor Smith and Daniel Kelly.

Brunson has his own win over Kelly, along with a recent knockout of Lyoto Machida. However, he has lost two straight against Ronaldo “Jacare” Souza and interim middleweight champ Israel Adesanya.

Both fighters have their paths to victory; if Theodorou wins, it will likely come via decision. Meanwhile, Brunson has knocked out his opponent in each of his last six victories. Theodorou has only been bested twice in MMA and has never been finished, but Brunson is one of the more prolific finishers he’ll have fought to date.

At -175, “Hurricane” Shane Burgos is the biggest favorite on the main card. The featherweight prospect has only lost once, to Calvin Kattar, back at UFC 220. He holds wins over Kurt Holobaugh, Godofredo Pepey and Charles Rosa to name a few.

Swanson enters as the more experienced fighter by far but has lost his last three. The guys he’s lost to are the cream of the crop, however, in Brian Ortega, Frankie Edgar and Renato Moicano.

Burgos has done his best work with his striking thus far in the Octagon, but he pulled off a flashy armbar over Holobaugh in his last outing. Still, this fight should be a striker’s delight and old guard vs. new guard-style match-up.

Dvalishvili enters as the slight favorite over Katona and his spotless record. Both fighters have eight wins, though Dvalishvili has lost four times. Experience and strength of schedule is what has Dvalishvili, a teammate of Iaquinta’s, installed as the slight betting favorite.

Third time’s the charm for Dvalishvili, who picked up his first UFC win over Terrion Ware in his last outing. His two losses in the Octagon were not without controversy to top-15 bantamweights. He dropped a split decision to Frankie Saenz that many thought the Georgian fighter had won. In his next bout, he appeared to pass out at the bell in a fight he was likely winning against Ricky Simon. It went down as a technical submission loss via guillotine for Dvalishvili.

Katona, a TUF 27 product, is officially 2-0 in the UFC with wins over Matthew Lopez and Jay Cucciniello. However, his best win was an exhibition win by submission over Bryce Mitchell on TUF. Still, Dvalishvili appears to be his stiffest test on paper.

For a UFC newcomer vs. a UFC veteran who’s had his ups and downs, a close betting line seems appropriate for the question mark that is Spivak.

Spivak is a perfect 9-0, having made his name under the World Warriors Fighting Championships in Ukraine, the country of his birth. (Fun fact, one of his wins came over Travis Fulton, who holds an MMA record of 257-54-10). His most previous win came over Tony Lopez, who holds a 61-30 pro record. Spivak has defended the WWFC heavyweight title twice after winning it against Fulton.

The Ukrainian champion is being given a stiff test in Harris off the bat. “The Big Ticket” is looking for his third straight ‘W,’ having defeated Andrei Arlovski and Daniel Spitz in his last two bouts. Prior to a disqualification loss against Mark Godbeer, Harris had a two-fight win-streak snapped against former champion and legend Fabricio Werdum. A bet here isn’t advisable unless you’ve managed to watch tape on Spivak and feel comfortable one way or another.

Like the fight ahead of it on the card, this middleweight match-up features a UFC newcomer against someone who’s had a few fights under the banner.

Barriault, the newcomer, enters as the TKO Major League MMA champ-champ (middleweight and light heavyweight). He is 11-1 in his professional MMA career with wins over Adam Hunter, Brendan Kornberger and Strahinja Gavrilovic.

Sanchez is 10-4 as a pro and 3-2 in the UFC. His wins have come over Markus Perez, Trevor Smith and Khalil Rountree. His two losses have come to former UFC light heavyweight title challenger Anthony Smith and Ryan Janes, who both took advantage for third-round stoppages when Sanchez gassed. Similar to the fight above, a bet on this fight would be more than the usual gamble due to the relative unknown Barriault is.