Cage Warriors 106: Night of Champions featured an incredible six championship fights, with one of those six taking place on the Prelims. The main card with five title fights aired live on UFC Fight Pass.

With both men bleeding heavily and the action becoming increasingly farcical as the third round unfolded, Goddard called a stop to the action due to an unsafe canvas. A rematch to unify the belts is most likely next.

In the co-main event, Jai Herbert defeated his opponent Jack Grant in the third round by TKO. As a result Herbert, won the vacant lightweight title. He will defend that belt later on this year against former lightweight champion Soren Bak.

The match most fans were looking forward to was without a doubt featherweight champion Dean Trueman against challenger Mads Burnell. After a solid round one by Trueman it was all Burnell in the second round. A Japanse neck-tie was too much for Trueman who was forced to tap out quickly. Burnell, a former UFC fighter, is feared for his unique ground-game and he now wants a UFC return.

A breathless, controversial middleweight title fight between middleweight champion James Webb and challenger Nathias Frederick saw the defending champion recover from twice being dropped on his head to retain his title via majority draw.

Frederick lost a point on all the scorecards due to spiking. Webb pulled out a majority draw in the end which was enough to keep the belt for now. An immediate rematch is most likely next according to Cage Warriors president Graham Boylan. 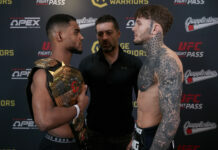 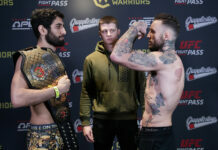 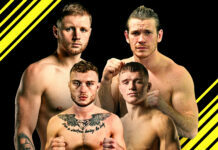