Fighting out of WNY MMA and Fitness in Buffalo, New York, amateur light heavyweight prospect Jamie Hare will be returning to action on July 13. Hare will be fighting at World Fighting Championships 109, which will take place from Pittsburgh, Pennsylvania. He will be looking to bounce back from a loss in his last fight, which also took place in Pittsburgh, at 247 Fighting Championships‘ Steeltown Throwdown.

Jamie Hare’s last visit to the Steel City didn’t end the way he would have liked. He was defeated via standing guillotine in the second round of his fight against Adam Oatman. Immediately following that fight, Hare expressed an interest to return to Pittsburgh, and potentially have a rematch with Oatman.

The first round of the fight was all Hare, all round. Despite his wrestling background, Hare was picking Oatman apart on the feet. If Jamie Hare had even 30 more seconds to work with in that first round, he could have finished the fight. But, in the second round, Oatman landed a big overhand right, which caused Hare to shoot for a takedown. Oatman got ahold of Hare’s neck, and the fight would end there.

Despite the loss, Hare was not discouraged. He seems to be using the loss as motivation to bounce back strong in his upcoming fight. “That’s the sport, man. That’s what makes MMA so great,” Hare said. “There’s a million ways to win and a million ways to lose. I have overcome adversity before; I’ll do it again. I’m confident of that.” Hare is very forward-thinking, as he has moved on from his last fight and is focused on nothing but his next fight. “At this point I’m looking ahead at what the future has in store.”

At WFC 109, Jamie Hare will be taking on Chris Huselton. When asked about what he knows about his opponent, Hare didn’t have much to say. “You might be shocked to hear this, but I never really look up my opponent much. I leave it up to my coaches,” he said. “My coaches know my personality. I will fight anyone, anytime, anywhere. That’s just who I am. I know in the cage anything can happen, so I don’t doubt myself or my training,” Hare commented of his preparation. As for the fight, Hare said there wasn’t much thought put into whether or not he should take the fight. “I was reached out to by the promoter and my coaches said, ‘here is what we found, take it.'” Hare went on to comment further about Huselton, saying “I was told he had some BJJ tournaments under his belt. I don’t really care. I’m just preparing for war and focusing on myself.”

The amateur rules in Pennsylvania are some of the more restrictive rules that you will find. For a fighter like Jamie Hare, a strong wrestler with a very good top game, the ban of ground and pound strikes to the face is by far the most challenging rule to deal with in Pennsylvania. It was a problem for Hare during his fight at Steeltown Throwdown.

Knowing the rules, and being better prepared for them this time, Hare realizes how big of a role that striking could play in this fight. “Wrestling will always be my base. I love grappling,” Hare said. “But, we filmed my sparring sessions before the last fight and compared them to this week. Night and day,” he added. Hare said that his boxing coach has been very impressed with his training leading up to this fight, saying that his coach told him “your hands look scary.” “Wherever this fight goes, I will be ready,” Hare finished.

Jamie Hare seems to have a laser focus and is zoned in on making his return to Pittsburgh a successful one. 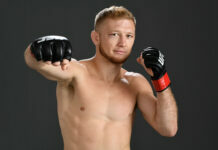