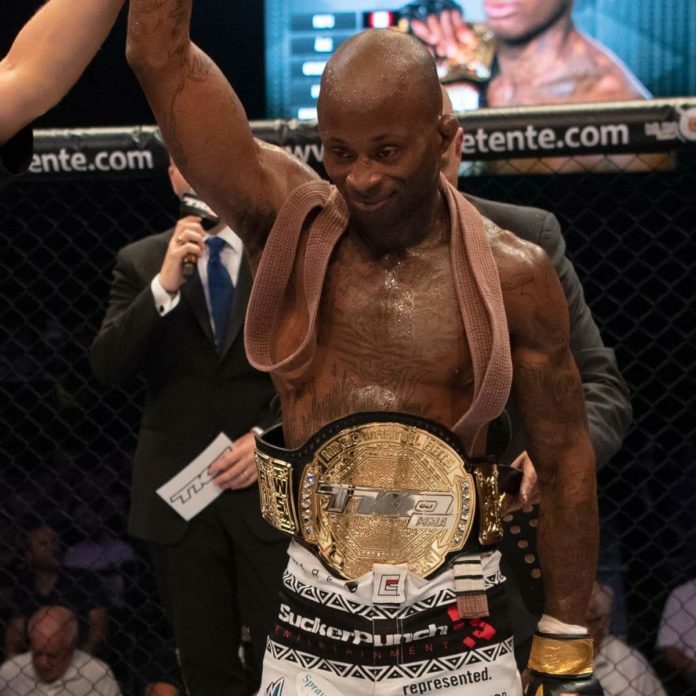 Canada has long been home to many of the world’s top mixed martial artists. One of those Canadian fighters on the cusp of a big lights breakout is Malcolm Gordon. Rising through the regional promotions, Gordon is the current TKO flyweight champion. According to Tapology, Gordon is ranked practically number one across Canada and the Great Lakes region of the United States. With the flyweight division on the ropes in the UFC, Gordon would be an amazing addition to start yet another ascent to the top.

It All Starts Somewhere

Most mixed martial artists begin with a particular art and broaden their skills. Gordon followed this process as well. “I was young and fell in love with jiu jitsu back in my hometown of Calgary AB,” Gordon told MMASucka. “That journey took me to Vegas where I met the late Shawn Tompkins Team. He got me my first MMA fight and I’ve never looked back.”

The late Tompkins was monumental to many fighters throughout his time as a world-class coach. The Canadian-born coach cornered Randy Couture on several occasions as well as being instrumental in the careers of fighters such as Vitor Belfort and Wanderlei Silva.

Any successful fighter will tell you one of the most important ingredients to success is having the right people and training partners around you. Gordon has been lucky enough to have had some of the very best in the sport to work with. He noted Mark Hominick, Sam Stout, Chris Horodecki, Kevin Randleman, Jeff Curran, and his jiu jitsu coach Jorge Britto. Recently he has been working with Joe Valentinni.

A Look at the Professional Career

Gordon is currently 12-3 which spans all the way back to 2012. His first four bouts were dominating performances earning him a record of 4-0 with four finishes. This earned him a trip to the Bellator stage in May 2014 at Bellator 119 where he defeated Chris Kelades via unanimous decision. After improving his record to 5-0, Gordon hit a short road bump, losing his next two bouts via KO/TKO. Gordon would turn it around to end 2015 with a unanimous decision victory over Shawn Mack at WXC 59: Homeland Pride. Gordon won his next two bouts following the Mack bout via first round finishes. These final two victories led Gordon to his currently home of TKO MMA.

November 2016 saw Gordon make his professional debut for TKO MMA. Though losing in the first round, Gordon would return to the organization in March 2018 and from then on has truly been the king of their flyweight division. He did make a return trip to WXC where he defended his flyweight title against Michael Jordan at WXC 69 and won via first round KO in July 2017 in only 17 seconds.

With about a 21 month break, Gordon returned at TKO 42 to challenge Jordan Graham for the vacant flyweight title. Gordon walked out the victor via first round submission on UFC Fight Pass. Five months later Gordon returned to the cage to take on his next challenge in the form of James Mancini at TKO Fight Night 1. Gordon continued to show dominance at this new stage of his career defending his crown via round two armbar. In his most recent outing, Gordon took the co-main event slot and defended his crown for a second time submitting The Ultimate Fighter season 24 fighter Yoni Sherbatov at TKO 47 in April 2019.

What’s Next for the Two-Organization Champion?

“Unfortunately I don’t think the UFC is on my radar nor do I think I’m on theirs. It’s not good enough these days to just be talented, you also need some sort of gimmick to go along with everything that sells,” Gordon told MMA Sucka. “Maybe a fake Irish accent or a scripted video talking s**t might get me some more attention. TKO is great for me in the time being. Think they’re doing a great job with developing the division. It just sucks not having my chance to get into the UFC because I know I belong there with the rest of the best fighters in the world and I crave ‘A’ class competition.”

Why You Should See Gordon in Action

The majority of MMA fans watch the sports for finishes. That is exactly what Gordon brings to the table. Only two of his 15 professional bouts have gone to decision. He is a “live by the sword, die by the sword” type of fighter. “My style is kill, kill, kill. I didn’t get ‘glory or death’ tattooed across my back for nothing,” Gordon stated. “Literally every fight is finish or be finished so if you like exciting fights and your an MMA fan, you need to tune in. Jiu jitsu for life!”