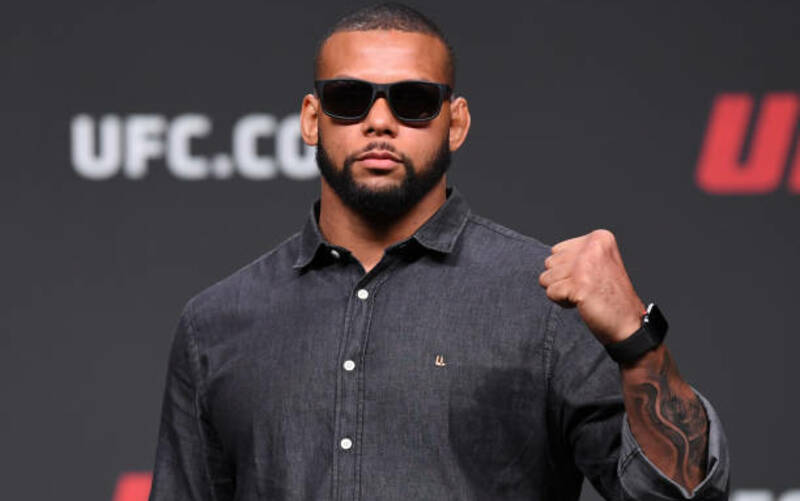 International Fight Week is officially underway. Even though there is only one fight card this weekend, the UFC has put together a stacked event to excite spectators. At UFC 239, one of the greatest fighters of all time returns as Jon Jones faces deadly knockout artist Thiago Santos for light heavyweight gold. In the co-feature, two-weight champion Amanda Nunes looks to defend her bantamweight belt against former champion Holly Holm. Below, we take a closer look at these bouts, alongside who else is fighting on the UFC 239 main card.

In the UFC 239 main card opener, The Ultimate Fighter 15 winner Michael Chiesa meets The Ultimate Fighter 1 winner Diego Sanchez. Chiesa (14-4), is coming off a submission victory in his welterweight debut vs. UFC veteran and former interim welterweight champion Carlos Condit at UFC 232. Chiesa is a submission specialist, with six of his UFC victories coming via submission. Sanchez (29-11) has won back-to-back contests over Mickey Gall and Craig White in his new welterweight run. In both of his victories, Sanchez has shown a relentless grappling game and is still going strong at 37-years old. Sanchez enters this fight as a huge underdog again.

Can the veteran secure another victory or will youth succeed? Either way, this matchup probably ends up on the floor in grappling scenarios in a fan-friendly contest.

A highly-anticipated light heavyweight debut is finally upon us, as Luke Rockhold faces Jan Blachowicz in an intriguing matchup. Rockhold (16-4), is a former Strikeforce and UFC middleweight champion. However, after a knockout loss to Yoel Romero at UFC 221, Rockhold will be making his light heavyweight debut. Additionally, Rockhold has been out of the Octagon 15 months and has only fought once a year since 2016. Blachowicz (23-8), is coming off a knockout loss to Thiago Santos last February. Prior to that, Blachowicz won four consecutive contests, highlighted by wins over Jimi Manuwa and Nikita Krylov. The 36-year old is a former KSW champion (defeated Rameau Thierry Sokoudjou at KSW 17 for the title) in his own right.

This is an interesting matchup that could end in multiple ways. Can Rockhold reign supreme in his light heavyweight debut or will Blachowicz prove people wrong once again?

Fan favorite and undefeated contender Ben Askren is back when he faces 46-fight veteran Jorge Masvidal in a welterweight contest. Both men have already engaged the fans into this bout with their social media trash talk. Askren (19-0-0, 1 No Contest), made his UFC arrival when he controversially choked out Robbie Lawler at UFC 235. Askren is also a former Bellator and ONE Championship welterweight champion. The 34-year old is a former Olympic wrestler has used his wrestling to dominant his foes, defeating Douglas Lima and Andrey Koreshkov in the past. Masvidal (33-13) most recently knocked out former title-challenger Darren Till last March. As a UFC welterweight, Masvidal is 5-4. However his losses were against Stephen Thompson, Demian Maia, Benson Henderson and Lorenz Larkin (three of the four losses were also split decisions).

This matchup is a grappler vs. striker style fight. Either the wrestling of Askren will control Masvidal, or the striking difference between Masvidal and Askren will be too much. Either way, the welterweight division will have another top contender by the end of it.

In the co-main event of the evening, defending champion Amanda Nunes will defend her bantamweight title against former champion Holly Holm. Nunes (17-4), is a two-weight champion who won the featherweight belt with a first-round knockout of Cris “Cyborg” Justino. “The Lioness” also holds knockout victories over Ronda Rousey, Miesha Tate, Germaine de Randamie and Julia Budd. Additionally, she also holds a pair of decision wins over current UFC flyweight champion, Valentina Shevchenko. Holm (12-4), is a former boxing champion – alongside being a former MMA champion with the UFC. The 37-year old takes on all comers, having defeated Megan Anderson, Bethe Correia, Marion Reneau and Raquel Pennington in her UFC career. She has also fought Ronda Rousey, Miesha Tate, Valentina Shevchenko, Germaine de Randamie and Cris Cyborg – all in five-round contests.

Will Nunes extend her claim to being the best women’s fighter of all time, or will Holm prove the oddsmakers wrong come again and come out with bantamweight gold? The bout will probably remain on the feet, with the brutal power of Nunes versus the the unorthodox attacks of Holm.

In the featured attraction, light heavyweight kingpin Jon Jones meets Brazilian savage Thiago Santos. Jones (24-1-0, 1 No Contest), has fought in championship contests since 2011. “Bones” has nine total title defenses, and has claimed light heavyweight gold three times – titles he has never lost inside the Octagon. Most recently, Jones dominated Anthony Smith at UFC 235 to win via unanimous decision. Jones is undoubtedly one of the best fighters to ever compete in MMA. Santos (21-6), is on the best run of his career and moving to light heavyweight in 2018. Since the move up to 205-pounds, Santos has stoppage wins over Jan Blachowicz, Jimi Manuwa and Eryk Anders. The 35-year old isn’t afraid to throw caution to the wind and swing to the finish – whether that happens to his opponent or himself in the process.

Jon Jones is a huge favorite, and rightfully so. However, Thiago Santos is very dangerous to anyone who competes against. The champion is the more complete fighter, but the challenger holds one punch knockout power to end the fight before the final horn. Will Jones display his unique ability once again or will Santos upset the world by becoming the first man to stop the title reign of Jones?